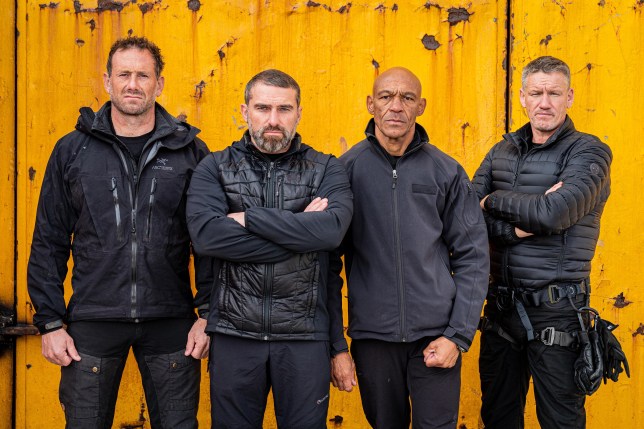 SAS: Who Dares Wins is back for a sixth series of it’s civilian version.

For those wondering what the show is about, it sees ex-Special Forces soldiers put 21 ordinary men and women through the gruelling Special Forces selection process.

It was the programme that launched the TV career of Ant Middleton, who had been with the show since it began in 2015.

His military credentials span over a decade starting from his time in the Royal Marines and 9 Parachute Squadron Engineers.

He joined the Special Boat Service (SBS) – the sister unit of the SAS – in 2008 where he spent four years as a point man and also a primary fires operator and sniper.

Ant has also used his Special Forces skillset to work in personal security, protecting VIPs such as government officials and celebrities.

The TV star will appear in the new series, having filmed episodes before Channel 4 revealed he had been dropped earlier this year.

Did Ant Middleton get sacked from SAS: Who Dares Wins?

The jury is still out on this. Channel 4 said in March that Ant would not be making future series of Who Dares Wins due to ‘personal conduct’. Several people also complained about his ‘inappropriate comments’ towards female staff members on set, which he dismissed as ‘indirect and just military banter’.

Channel 4 said in a statement: ‘Ant Middleton will not be taking part in future series of SAS: Who Dares Wins.

‘Following a number of discussions Channel 4 and Minnow Films have had with him in relation to his personal conduct it has become clear that our views and values are not aligned and we will not be working with him again.’

Their statement came after Ant announced his exit himself on Instagram, saying he had ‘decided it’s time to move on’.

‘Big respect to my fellow DS – its been a journey I’ll never forget. Thanks to everyone that took part and made the show what it is. Really excited about the future and what’s coming this year. Stay positive,’ he said.

He also insisted on Twitter that he wasn’t sacked.

Replying to a tweet from Piers Morgan which said his firing was ‘absurd’, Ant replied: ‘Fired??? All will be revealed. See you soon.’

What did Ant Middleton say about Black Lives Matter on Twitter?

The former Who Dares Wins star came under fire last summer for his comments about the Black Lives Matter movement against police brutality.

As far-right protesters clashed with BLM demonstrators in London, Ant branded both groups ‘scum’ in a since-deleted tweet.

He said: ‘The extreme left against the extreme right. When did two wrongs make a right. It was only a matter of time. BLM and EDL are not welcome on our streets, absolute scum.

‘What a great example you are to your future generation. Bravo.’

However after fierce backlash – and pal SAS pal Ollie Ollerton coming to his defence – he apologised later in a video insisting he is not racist.

Ant said: ‘Within that tweet I mentioned the BLM and EDL and the word “scum”. At no point was I calling the BLM scum and comparing the two organisations. I want to make that really, really clear. The word scum was used to describe the people in the video that were violent, that were causing terror on the streets of London and setting a bad example for our future generations.’

What’s happened to Ant Middleton since leaving the show?

Despite being axed from the UK version of the series, Ant will be a part of the Australian version on Channel 7 as chief instructor.

A spokesperson told Daily Mail Australia: ‘Ant Middleton and his fellow DS (Directing Staff), Mark ‘Billy’ Billingham, Jason Fox and Ollie Ollerton, will all be returning for the second season of SAS Australia which is currently in pre-production.’

Ant has since claimed he was ‘too hot to handle’ for the UK in an interview with The Kyle and Jackie O Show while quarantining Down Under.

‘But listen, it’s all good. It is what it is,’ Ant continued. ‘The moment my work starts to get diluted, and I don’t stay true to who I am and true to what the course is about, then it’s time for me to move on.’

He also tried his hand at rapping on social media to the sounds of Notorious B.I.G classic Juicy, and hinted to followers that he wasn’t a fan of living in Britain, writing: ‘If you don’t like the country you’re in, leave it! I have.’

SAS: Who Dares Wins starts tonight at 9pm on Channel 4.