Her side of the story. Olivia Munn is aware of the intense fan interest surrounding her relationship with John Mulaney — and it’s affected what she decides to share about it.

“They think they know our relationship so well. When in reality, they don’t,” the Newsroom alum, 41, told the Los Angeles Times in an interview published on Tuesday, November 16. “There’s no way anyone could know what any of his relationships were or what our relationship is.”

Days after the comedian, 39, announced his split from wife Anna Marie Tendler in May, Us Weekly confirmed that he had moved on with Munn. Four months later, the Big Mouth star confirmed that the Violet actress is expecting the duo’s first child.

“I packed a lot into this. … Is it September now? I went to rehab in September, I got out in October, I moved out of my home from my ex-wife,” the former Saturday Night Live writer said during a September appearance on Late Night With Seth Meyers. “Then in the spring, I went to Los Angeles and met and started to date a wonderful woman named Olivia.”

The Magic Mike actress later told Access that she was “feeling really good” after going public with the baby news. “Just the outpouring of love and support has been really amazing,” she said in September. “There has been a really big mom tribe that comes up. I’ve heard about it, but they really come up in full force. There’s a really great dad tribe too, everyone comes up is really supportive and it means so much to me.” 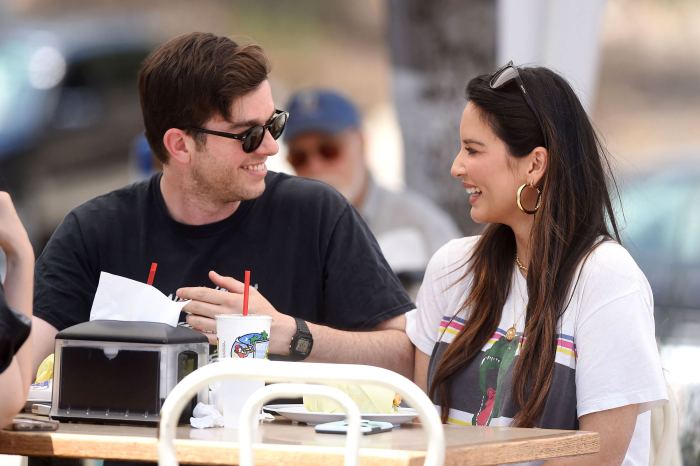 The couple’s joy, however, didn’t stop online critics from posting social media videos speculating about the timeline of their whirlwind romance. Munn has since decided not to respond to any specific rumors because she feels there’s no right answer.

“If I try to say anything, I run the risk of being called messy or not telling the truth,” she told the Los Angeles Times. “The only way to win, for me, is to pull back and to not play the game at all. …  For whatever reason, it’s easier to blame me.”

For that reason, she’s decided to keep her pregnancy milestones mostly to herself rather than documenting the process via social media. “There’s this vulnerability that I feel that makes me want to … just turn everything off,” she explained. “I’d rather close the door to that and just take care of myself and my baby.”

Mulaney, for his part, is still working out the details of his divorce from Tendler, 36. The actor officially filed to end their marriage in July, two months after the former couple announced their split. In November, Us confirmed that the Oh, Hello star filed papers to change his legal representation, hiring New York-based law firm Teitler & Teitler, LLP.

According to the firm’s website, the company is a “litigation boutique with over 50 years of experience counseling clients in navigating complex and high-stakes disputes and crisis management situations,” and its attorneys have advised clients in “difficult and important cases in state and federal courts.”

When it comes to his future with Munn, the duo are keeping things flexible. “Becoming a mom was always more important to her than settling down in a conventional way,” an insider told Us of the actress last month. “She’s a real feminist and doesn’t need a man by her side 24/7. She never has.”