The latest celebrity has been unmasked on The Masked Singer UK, and the competition is getting tougher and tougher!

Tonight, Poodle ended up being chosen to leave the ITV series by the judges after landing in the bottom two with Robobunny.

Despite delivering a stellar performance it was the costumed singer’s time to go – revealing Keane lead singer Tom Chaplin underneath the mask as he revealed his identity to the excited audience.

Tonight marked the first time that all of the remaining contestants performed for Mo Gilligan, Davina McCall, Rita Ora and Jonathan Ross, with host Joel Dommett presiding over the show.

The panel were absolutely stunned by Tom’s reveal, with none having guessed the musician as the vocalist behind Poodle.

Jonathan said that he was ‘kicking himself’ as he’s a big fan of the band, but couldn’t place his voice. 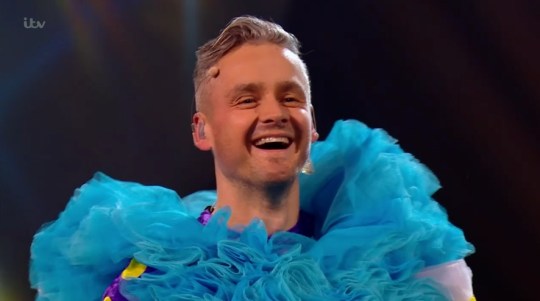 Tom Chaplin stunned the judges with his reveal (Picture: ITV)

When asked why he sang Natasha Bedingfield’s Unwritten, Tom explained that Keane beat her at the 2005 Brit Awards to win Best Breakthrough Act.

As for why he performed as a dog, he told the judges that his wife told him that if was offered the chance to do The Masked Singer UK – considering they’re both big fans of the show – then he had to be a poodle.

In the VT during episode five, the paints and the tartan scarf shown hinted at the fact that Tom studied History of Art in Edinburgh.

Meanwhile, the snowman bauble shown on the Christmas tree was a hint at his cover of the song Walking In The Air from The Snowman.

Following his exit, Tom was asked why he chose to go on The Masked Singer, saying that he’s reached a point in his life ‘where I don’t myself too seriously anymore’.

‘I think that’s pretty important if you’re going to dress up as a seven foot multicoloured poodle. I’ve also become much more interested in embracing different challenges – being in a band is like living on a little island, so it’s good to try things that are out of your comfort zone!’ he said.

He also revealed that his daughter had no idea he was participating in the competition – so it’ll be interesting to see how she reacts!

The latest elimination means there are now just seven singers left – so will come out on top in the end to clinch the win?

The Masked Singer UK returns next Saturday at 7pm and is available to watch on ITV Hub.