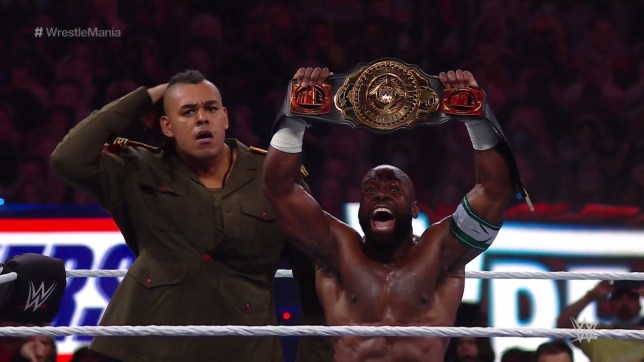 WWE star Dabba-Kato made his return to WWE programming at WrestleMania 37 and helped Apollo Crews to a huge victory over Big E.

The towering star – whose real name is Babatunde Aiyegbusi – was last seen as part of the short lived Raw Underground skits last summer, but hasn’t been seen on television in months.

The Polish wrestler whose father is Nigerian – previously played American football and featured for the Minnesota Vikings in the 2015 preseason before getting cut.
The following year, he was signed by WWE as part of its class of recruits at the Performance Center.

By 2018, he was accompanying Lio Rush to the ring for NXT live events, and then made his TV debut in the Greatest Royal Rumble in Saudi Arabia, although he was eliminated by Braun Strowman.

In August last year, he debuted on Raw Underground, and defeated low-level opponents before eventually being dropped again by the Monster Among Men.

In October, he was actually drafted to the Raw brand but hadn’t made an appearance since then.

He made his return on the second night of WrestleMania 37, interrupting the Nigerian Drum Match between Crews and Big E.

The two SmackDown superstars had battered each other with the Intercontinental Championship hanging in the balance as the top prize, and they move than lived up to the title’s rich legacy.

It looked like The New Day’s Big E – who made his entrance with Wale performing his theme – was poised for a victory before Babatunde came out of nowhere and dropped him with a huge Chokeslam.

That was enough to help Crews steal a win – and the IC Title – with fans sure to find out more about his bodyguard on SmackDown this week.

Elsewhere on the show, Sheamus busted open Riddle with a huge Brogue Kick to win the United States Title, while the Women’s Tag Team Champions Nia Jax and Shayna Baszler retained over Natalya and Tamina.