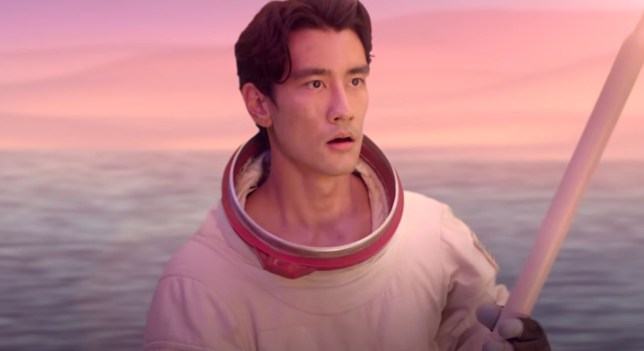 Doja Cat gave her fanbase a treat when she dropped the video for new single Kiss Me More on Friday.

The upbeat pop track features SZA and has typically racy lyrics: ‘Somethin’ we just gotta get into/Sign first, middle, last, on the wisdom tooth/N****s wishin’ that the p***y was a kissin’ booth/Taste breakfast, lunch and gin and juice.’

The rapper has gone all out for the cheeky video which depicts her and SZA as mystical beings on a faraway – and bright pink – island.

Doja looks incredible in a pink bodysuit with a matching head covering and sparkling statement necklace.

It also stars actor Alex Landi who crash lands on their mystical planet.

In one scene he goes shirtless just before getting up close and personal with Doja and SZA, who caress him on a shiny pink bed.

He doesn’t get a happy ending though, as poor Alex winds up just another one of their victims, trapped inside a test tube in his underwear.

He has drawn quite a bit of attention for his cameo in the video, but who is Alex Landi?

Who is actor Alex Landi from Doja Cat’s Kiss Me More video?

He also stars alongside Jared Padalecki and Keegan Allen in the reboot of Walker, Texas Ranger as a character called Bret.

He has also had roles in TV series such as Station 19, Insatiable and American Housewife.

In a 2019 interview with Attitude, the TV star said he feels straight actors should be able to play gay roles.

Alex shared: ‘If I put in my two cents, the best actor wins. It comes down to the role breakdown, they [casting directors] request different things, and each actor has his own set of attributes of what he’s good at doing, and what he’s not good at doing.

‘It just falls into whoever can do it the best and what the producer likes. I don’t think it necessarily has to fall into sexual identity. It falls into who can get the job done.’

What are the lyrics to Doja Cat’s Kiss Me More?

As expected from Doja, real name Amala Dlamini, she holds nothing back as she asks her lover to snog her face off.

‘We could kiss and just cut the rubbish/Then I might be onto somethin’/I ain’t givin’ you one in public/I’m givin’ you hundreds, f**k it.’

You can find the full lyrics here.

Who is Doja Cat’s boyfriend?

The rapper was most recently linked with musician Johnny Utah – known publicly as JAWNY – from 2019 until she revealed they had split in an Instagram Live in February last year, according to Popbuzz. However they are still on good terms.