We’re still not over it! (Picture: Netflix)

The final two episodes of Stranger Things dropped on Friday July 1, and co-creator Matt Duffer previously teased that ‘darker themes’ will be explored for the remaining episodes in Hawkins, with the characters thrown into a ‘full-blown horror’ – in which they would ‘all be in jeopardy’.

And he certainly wasn’t lying!

At the end of the first seven instalments, the origins of the new villain Vecna were revealed, as it was discovered that he was in actual fact Number One (Jamie Campbell Bower), aka the predecessor to Millie Bobby Brown’s Eleven, who also boasted powerful abilities.

Before becoming One, he was Henry Creel, the child of Victor Creel (Robert Englund), who was wrongfully imprisoned for the murders of his wife and daughter.

Episodes eight and nine delivered unexpected twists and turns, but who struggled to make it out alive? 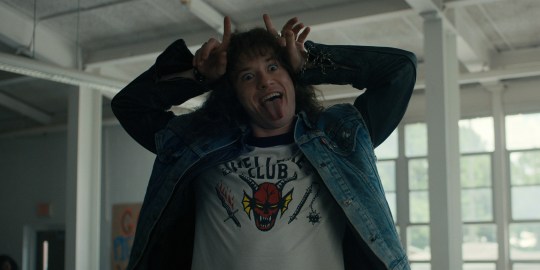 Eddie Munson, (Joseph Quinn) the leader of the Hellfire Club, was killed off in volume two, after sustaining fatal injuries from bats, after he and Dustin (Gaten Matarazzo) were put out on watch for Vecna.

In his final moments, an injured Eddie was proud of himself for being brave, reminding Dustin: ‘I didn’t run away this time, right? You’re gonna have to look after those little sheep for me,’ as he’s planning to graduate.

Dustin replied: ‘I love you, too,’ before Eddie died in his arms.

The character, played by Matthew Modine, was assumed to have died in the first season of the hit Netflix series, but he made his dramatic return in season four, before his real death, which ended up being surprisingly emotional for fans.

The scientist, also known as Papa, raised Eleven until she escaped the Hawkins Lab at the start of the first series.

This season, Papa managed to convince Eleven to join him in his secret lab for her to regain some powers, and although she did, their plans didn’t last long.

In his final moments, he says: ‘You are my family. My child.’ I’ve only ever wanted to help you, to protect you. Everything I did, I did for you. I need you to understand. Please tell me you understand.’

A tearful Eleven replies: ‘Goodbye, Papa’ as she walks away.

Max was under Vecna’s sinister trance for a second time (Picture: Netflix)

Max’s (Sadie Sink) journey has been a tumultuous one to say the least after fans witnessed her character struggling to mourn the death of her brother Billy Hargrove (Dacre Montgomery).

In episode four, Vecna invades Max’s mind and comes close to killing her, but with the help of Dustin, Steve, (Joe Keerey) Lucas, (Caleb McLaughlin) and Kate Bush’s 1985 hit Running Up That Hill.

Although Max made it through volume one of the new season somewhat safely, she once again comes close to losing her life in volume two, and this time round it was up to Eleven to save her.

In episode nine titled The Piggyback, Eleven and Vecna face off in their final battle. Eleven eventually wins, but Max is defeated by Vecna’s curse and dies in Lucas’ arms.

While inside Max’s mind, a heartbroken Eleven sees Lucas scream in pain and decides to revive her with her powers.

Two days after the final battle against Vecna, Mike, (Finn Wolfhard) Will, (Noah Schnapp) Eleven, Argyle (Eduardo Franco) and Jonathan (Charlie Heaton) discover Max is still alive, but in a coma in hospital with Lucas, and Erica (Priah Nicole Ferguson) by her side.

We also learn that Max only clinically died for one minute, but ultimately survived Vecna’s curse, however, her fate is still unknown.

Stranger Things is available to watch on Netflix.