The new version of the hit movie stars Los Angeles Lakers legend LeBron James alongside Bugs Bunny, Daffy Duck and pals, as well as a whole host of celebrity cameos and appearances from Warner Bros.’ roster of franchises, including Superman, King Kong and The Flintstones.

As the sequel settles in on the silver screen, we take a look back at the original Space Jam movie that started it all, 25 years ago.

When did Space Jam come out?

Space Jam graced our cinemas with its presence all the way back in 1996 with its US release, and March 1997 in the UK, and yes we now feel old for realising how much time has passed.

The first animated movie to be produced by Warner Bros. Feature Animation, Space Jam made $250million (£180m) worldwide, making it a slam dunk as the highest-grossing basketball film ever, as well as earning its place in the top 10 highest grossing films of that year.

Who was in the original Space Jam cast?

The (human) star of Space Jam was the one and only Michael Jordan, NBA legend and global cultural icon of the 90s. Often called the greatest basketball player of all time, Jordan won six championships with the Chicago Bulls and his slam dunk ability earned him the nicknames ‘Air Jordan’ and ‘His Airness’.

The movie had fun with its own fictionalised version of what happened between Jordan’s first basketball retirement in 1993 (he tried out baseball in real life, FYI) and comeback in 1995, which involved the Looney Tunes convincing him to enlist in their basketball match against a group of extremely tall aliens in order to protect their freedom.

As well as star and main draw Jordan, Space Jam also featured Wayne Knight as Jordan’s publicist and assistant and Theresa Randel as Jordan’s real-life wife at the time, Juanita.

Danny DeVito also crops up in the animated voice cast as Swackhammer, owner of an intergalactic theme park. 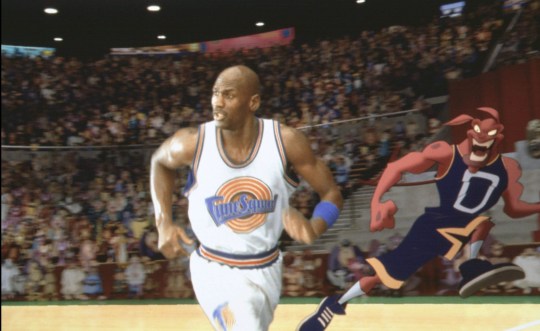 Although Michael Jordan was Space Jam’s basketball star, he recruited plenty of pals to appear as themselves (Picture: Moviestore/Rex/Shutterstock)

Who is the Space Jam bunny?

There are two VIBs (Very Important Bunnies) in Space Jam, one being Looney Tunes stalwart and de facto leader, Bugs Bunny, who was first seen in 1938 and originally voiced by the legendary Mel Blanc, and the other is his love interest Lola Bunny, who was introduced to audiences for the first time through this movie.

As a member of the Tune Squad, she is the only one of the animated characters that has any talent on the court to begin with, and is voiced by Kath Soucie in the original and Zendaya in the sequel.

Plenty of other famous Looney Tunes are present and correct too, including Daffy Duck, Elmer Fudd, Porky Pig, Tweety Pie and Sylvester, Marvin the Martian, Yosemite Sam and Speedy Gonzales.

Where can you watch the original Space Jam and how long is it?

If we’ve got you feeling all nostalgic for the original, Space Jam is available to rent or buy on platforms including Amazon Prime and iTunes in in the UK. It’s currently not included in any subscription packages.

The film clocks in at a pretty brisk 88 minutes, reflecting its family-friendly tone, whereas the sequel is longer at 115 minutes, so just shy of two hours. 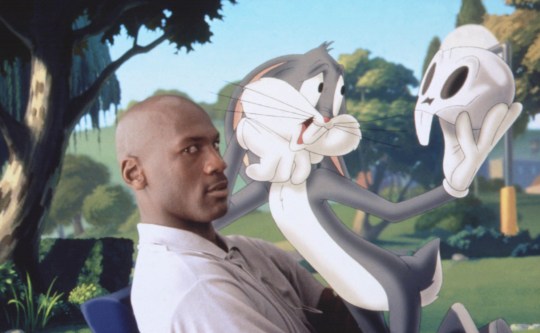 When is Space Jam 2 released?

Space Jam: A New Legacy is available to watch in UK cinemas now, after releasing on Friday July 16. It’s also available to stream for free, but only in the US as part of an HBO Max subscription. It is currently not available on any VOD platforms in the UK.

Space Jam: A New Legacy is in cinemas now.