SWEDEN defender Marcus Danielson was sent off for a potential leg-breaker on Ukraine’s Artem Besedin in their crunch Euro 2020 clash.

The 32-year-old was given his marching orders via a VAR review into his challenge in extra time with the scores level – only for his country to lose the game seconds before a penalty shoot-out.

Sweden star Marcus Danielson was sent off for a rough challenge on Ukraine’s Artem BesedinCredit: Reuters 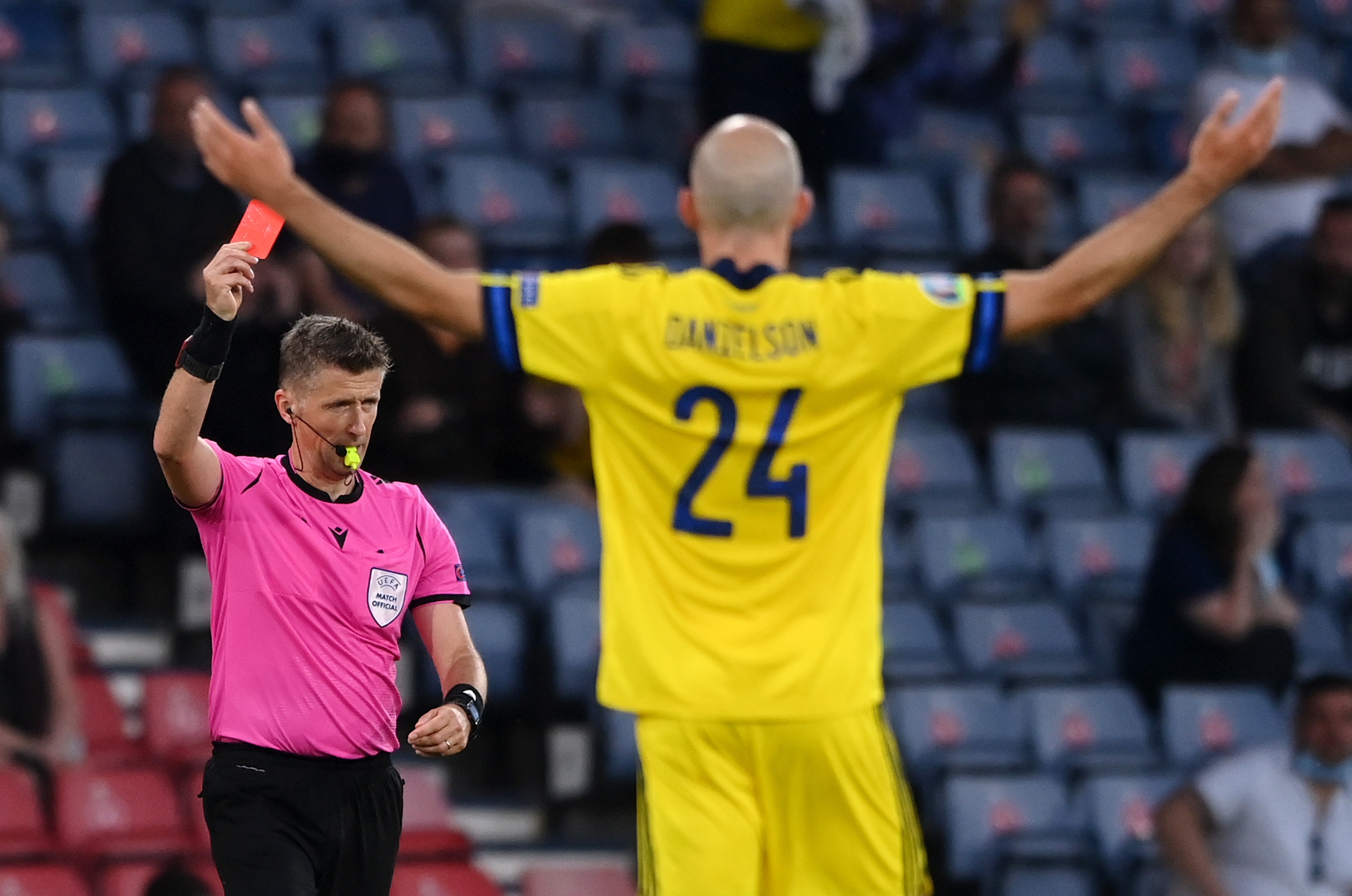 That’s not a red card. He’s perfectly entitled to clear that ball. Slow motion once again turning an innocuous challenge look more than it was. Ridiculous.

Says the bloke who never tackled. It was a recklessly high challenge that could have broken his opponent’s leg. Definite red card. https://t.co/tEmwHisPJb

Danielson was initially awarded a yellow after his attempted clearance ended with him catching Besedin on the follow-through.

However, Italian referee Daniele Orsato was advised to have another look at the tackle on the pitch-side monitor.

And replays showed that although Danielson got the ball first, his studs were high and they caught Besedin’s leg – bending it awkwardly.

The centre-back – who plays his club football at Chinese Super League club Dalian Professional – was furious with the decision.

Gary Lineker and Joey Barton were among those watching at home who clearly had sympathy for Danielson as he took to social media to claim it was never a red card.

“Slow motion once again turning an innocuous challenge look more than it was. Ridiculous.”

Former Premier League referee Mark Halsey told SunSport he did think it was a red.

And plenty agreed with him that Danielson should have been being given his marching orders after Besedin’s knee hyperextended under the pressure and he was forced to come off.

MARCUS DANIELSON can have no complaints after the Sweden defender was sent off for serious foul play in extra-time against Ukraine.

When you lunge at the ball with one or two feet you run the risk of being red carded for a challenge of this type.

Danielson was high and, although he won the ball first, his follow through caught Artem Besedin.

It was a challenge which endangered a player’s safety with excessive force and met the criteria for a dismissal for me.

I thought it was a good use of VAR by Italian official Massimiliano Irrati, who advised countryman Daniele Orsato to consult the pitchside monitor.

Once Orsato saw the challenge again there was no doubt he was going to dish out a red card to Danielson.

Never a red that! Nonsense

“It was a recklessly high challenge that could have broken his opponent’s leg. Definite red card.”

Danielson’s red card meant he became only the fourth player to receive his marching orders in extra-time of a Euros match.

And Ukraine finally made the extra man count with Artem Dovbyk’s stopping header enough to set up a quarter-final clash against England.