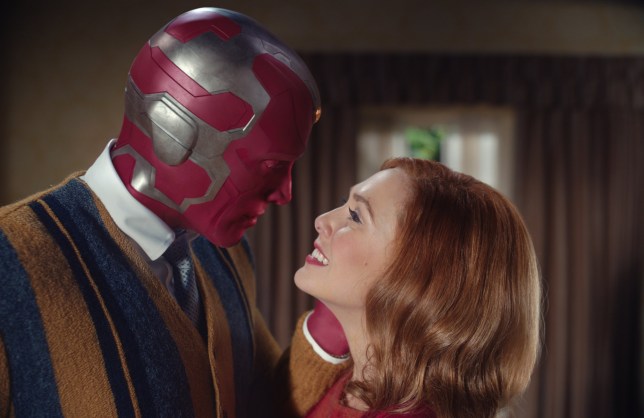 The truth behind Vision’s existence in Westview is finally revealed (Picture: Courtesy of Marvel Studios)

Warning: major spoilers ahead for episode eight of WandaVision.

In episode eight of Marvel’s WandaVision, we finally see the moment Wanda Maximoff (Elizabeth Olsen) created her fake reality within the neighbourhood of Westview, her power fuelled by her grief for the death of her partner Vision (Paul Bettany).

Last week, it was finally confirmed that neighbour Agnes (Kathryn Hahn) is really a powerful witch called Agatha Harkness, who has been sneakily influencing strange happenings in Wanda’s world throughout the Disney Plus series.

In the latest instalment, we witness Agatha kill her coven in 17th Century Salem, Massachusetts, before viewers are taken back to the present day, where Agatha forces Wanda to revisit painful moments in her life in order to try to understand the extent of her power.

Wanda relives the moment that her parents were killed in Sokovia when she was a child, the time she volunteered for Hydra for experiments with the Mind Stone and chatting with Vision at the Avengers compound after her brother, Pietro Maximoff (Aaron Taylor-Johnson), is killed in Avengers: Age of Ultron.

Agatha states her belief that even before Wanda came into contact with the Mind Stone, she already had powers as a witch, something that Wanda had never even thought to consider.

But one of the most mind-boggling moments comes when Wanda creates a new version of Vision out of thin air at the very beginning of her sitcom-like reality. 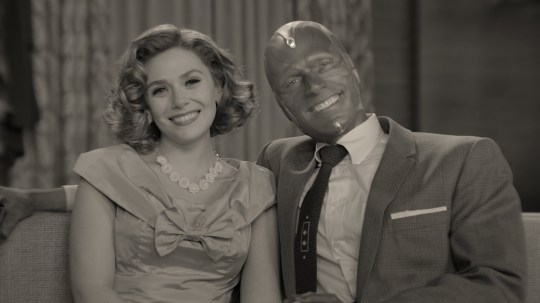 Wanda has the power to bring Vision to life even without his body (Picture: Disney)

Beforehand, Wanda visits S.W.O.R.D. headquarters, where she speaks to acting director Tyler Hayward (Josh Stamberg) about retrieving Vision’s body so that she can bury him, after he died in Avengers: Infinity War at the hands of Thanos (Josh Brolin).

Hayward shows Wanda a window where she can see Vision’s body being brutally taken apart, as he explains that in S.W.O.R.D.’s view, Vision is a dangerous, sentient weapon that cannot simply be put in the ground.

When the grief-stricken Wanda goes to take a closer look at her partner, she puts her hand to her head, saying: ‘I can’t feel you.’

While some fans may have assumed that Wanda steals Vision’s body in order to resurrect him – a theory that Hayward leads others to believe – it turns out she didn’t, as she left the building empty handed and drove to Westview in New Jersey. 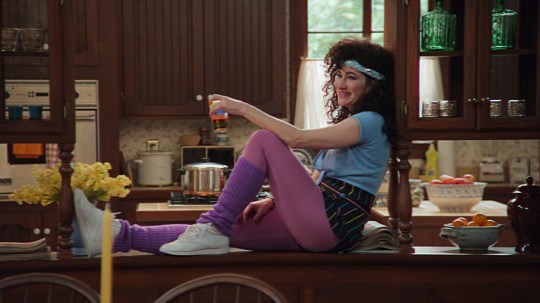 Agatha has been trying to suss out Wanda’s powers all along (Picture: Marvel Studios)

After Wanda parks her car, she gets out of the vehicle and faces an empty plot of land, opening up a piece of paper with a house’s floor plan with a message written on it by Vision inside the shape of a heart that reads: ‘To grow old in. V.’

Overwhelmed by her loss, Wanda falls to her knees, her red power seemingly exploding out of her and creating the fake WandaVision reality we have come to know.

And then, a yellow power the same colour as the Mind Stone is also emitted from her body, generating a new Vision from head to toe. 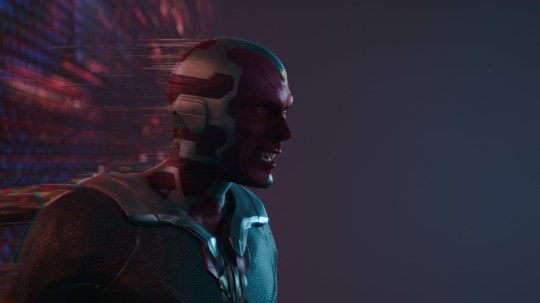 Returning to the present day, Agatha has Wanda’s sons Billy (Julian Hilliard) and Tommy (Jett Klyne) captive, having realised just how powerful an adversary Wanda is.

‘I know what you are. You have no idea how dangerous you are,’ Agatha tells her.

‘You’re supposed to be a myth, a being capable of spontaneous creation, and here you are, using it to make breakfast for dinner.’

Agatha tells Wanda that the life she has made for herself with Vision and her children is ‘Chaos Magic’.

‘And that makes you the Scarlet Witch,’ she states, marking the first reference to Wanda’s comic book alias in the Marvel Cinematic Universe.

WandaVision is available to watch on Disney Plus with new episodes released on Fridays.