A new teaser for episode four of WandaVision has revealed the highly-anticipated return of a couple of Marvel characters who were last seen in films in the MCU (Marvel Cinematic Universe).

At the end of the third episode of the TV series, Monica Rambeau (Teyonah Parris) – who is known as Geraldine – is blasted by Wanda Maximoff (Elizabeth Olsen) out of her sitcom-like reality after mentioning Pietro Maximoff (Aaron Taylor-Johnson), Wanda’s twin brother who died in the 2015 film Avengers: Age of Ultron.

Monica lands on a grassy area in the real world, surrounded by trucks and helicopters which have clearly been monitoring Wanda and Vision (Paul Bettany) from outside their neighbourhood of Westview.

In a new series of clips released for the upcoming episode, it’s officially confirmed that Monica is an agent for S.W.O.R.D., as she is seen wearing the uniform for the intelligence agency.

She is joined by FBI agent Jimmy Woo (Randall Park), who Marvel fans will remember from Ant-Man and the Wasp as the dedicated parole officer of Scott Lang (Paul Rudd).

Jimmy isn’t the only character making a return to the MCU in WandaVision, as for the first time this series, viewers are also going to become reacquainted with Darcy Lewis (Kat Dennings). 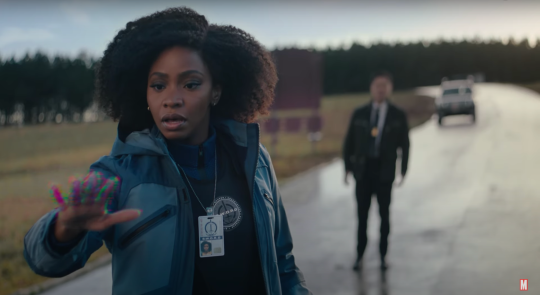 Monica can’t help but be curious by the energy field in front of her (Picture: Marvel Studios/Disney)

Darcy first appeared in the 2011 origin film Thor and then again two years later in the sequel Thor: The Dark World.

In the eight years since the character was last seen, Darcy has progressed from being an intern for Jane Foster (Natalie Portman) to becoming a doctor herself.

At the beginning of the teaser for the latest instalment of WandaVision, Monica walks along a road next to a sign for Westview, stopping as she comes across what appears to be some kind of energy field in front of her.

As she extends her hand towards it, Jimmy, who is behind her, urges her to be cautious. 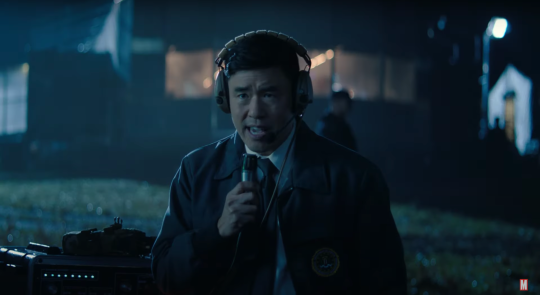 Jimmy attempts to get through to Wanda (Picture: Marvel Studios/Disney)

‘Captain Rambeau, watch it!’ he shouts, as her hand becomes pixelated as it comes into contact with the energy field.

In another clip, Jimmy is wearing a pair of headphones and speaking into a microphone in an attempt to communicate with Wanda in her simulated reality.

‘Wanda, can you read me? Who’s doing this to you Wanda?’ he says, as scenes are shown from a previous episode of WandaVision, when Wanda hears his muffled voice through a radio. 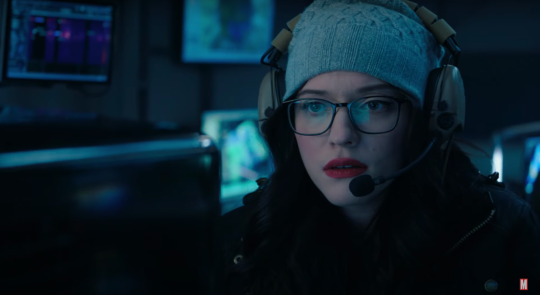 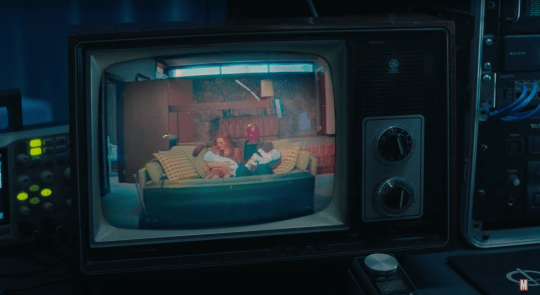 Do they know they’re being watched? (Picture: Marvel Studios/Disney)

It appears the new episode of WandaVision will take viewers back to several moments they’ve already seen, to show how the scenes featuring Wanda and Vision are being viewed on TV sets in the real world.

Darcy is one of the individuals keeping a close eye on the superpowered couple, as pictures of all the individuals that have appeared in Westview are shown pinned to a board.

Will this be the episode that Wanda and Vision’s false reality comes crashing down?

Probably not… but we’ll bet it’s going to shed a lot more light on the show’s peculiar happenings.

The new episode of WandaVision is due to be released on Friday on Disney Plus.