Vinnie Jones has taken a swipe at Piers Morgan during an appearance on Good Morning Britain, saying Alastair Campbell looks ‘10 years younger’ than the former host.

Alastair, who is six years older than Piers, is taking over presenting duties during Mental Health Awareness Week.

Actor and former footballer Vinnie aimed a dig at Piers on Wednesday, jokingly saying to Alastair: ‘I must say Piers, you look 10 years younger!’

Turning to Susanna Reid, Vinnie went on to say: ‘I don’t know what you’ve done to him, Susanna, but he looks 10 years younger – well done, Piers.’

Alastair laughed and replied: ‘I’m about 13 years older I think!’ 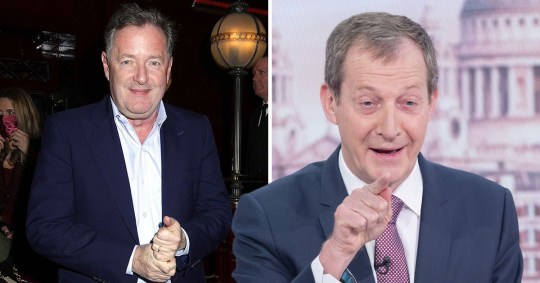 Piers Morgan and Alastair Campbell have clashed in the past (Picture: Rex Features)

Alastair, 63, has only been presenting for a few days, but he’s already found himself involved in a clash with Piers, 56, on Twitter.

Piers went on a social media rant, blasting celebrity ‘mental health campaigners’, which he accused of making money from ‘exploiting their myriad problems’.

Former Labour spin doctor Alastair fired back in a lengthy Twitter thread: ‘If you mean me – and I have a charity account which takes a share of my earnings, which go to causes we believe in, mainly mental health and education for poorer children. I do paid speaking gigs and often ask for fees to be paid to charity.’ 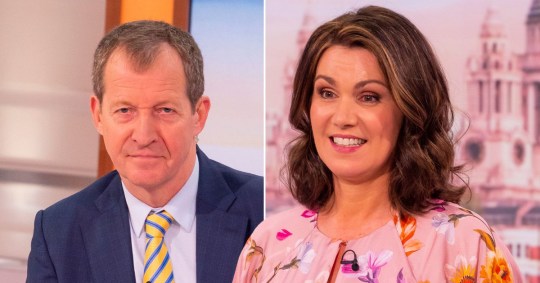 Meanwhile, during the same interview with Vinnie, Alastair accidentally announced that Queen Elizabeth II had died – but it goes without saying that the Queen, who is 95, is very much alive.

Alastair realised his mistake and apologised to confused viewers at home saying he got Her Majesty mixed up with Prince Philip, who died aged 99 at Windsor Castle on April 9.

‘We talked a lot about Prince Philip after the death of the Queen,’ Alastair said.

A moment later, he interjected: ‘Can I just say something, I think I may have accidentally announced the death of the Queen. I meant Prince Philip of course.’

‘I think people understood exactly what you meant,’ Susanna said.