The 76-year-old businessman left the wrestling world stunned by announcing he is stepping away from the company he’s been in charge of since 1982 when he bought it from his father, Vincent J. McMahon.

The industry-shifting event comes amid an investigation by the board of directors into sexual misconduct allegations against the now-former chairman and CEO.

Responding to the news, Flair tweeted: ‘[Vince McMahon]. You’ve made my life better every day since I’ve been in the wrestling business. You’re the only promoter in my career that treated me like a man, respected who I was, and made me a better person. God bless you for all you’ve done. FYI- no one can follow your act. (sic)’

Meanwhile, his fellow Hall of Famer Foley added: ‘Thank you for everything, Vince. You changed my life.’

Brie Bella wrote: ‘Thank you Vince!! You took a chance on the Bella Twins and I’ll forever be grateful for that!! Enjoy retirement.’ 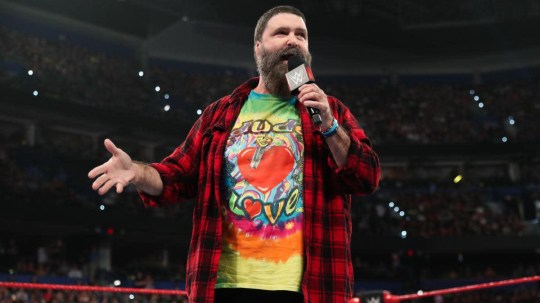 While John ‘Bradshaw’ Layfield said: ‘You changed the entire entertainment world and how we view that entertainment. From Iraq, to Afghanistan, to the first group to visit the Twin Towers and all the charity work you have funded/supported-you also changed the world for the better. Thank you for everything! #legend’

Paige – who recently left WWE – tweeted: ‘Thank you for everything Vince! You’ve been nothing but nice to me and I appreciate everything you’ve done for wrestling! #ThankYouVince’

And current AEW star William Regal added: ‘Thank you very much Boss. 21 years of a great job traveling the world and without your help I wouldn’t of lived to see a second of it.x’

In a statement on Friday, McMahon said: ‘As I approach 77 years old, I feel it’s time for me to retire as Chairman and CEO of WWE. Throughout the years, it’s been a privilege to help WWE bring you joy, inspire you, thrill you, surprise you, and always entertain you.

‘I would like to thank my family for mightily contributing to our success, and I would also like to thank all of our past and present Superstars and employees for their dedication and passion for our brand.

‘Most importantly, I would like to thank our fans for allowing us into your homes every week and being your choice of entertainment.

‘I hold the deepest appreciation and admiration for our generations of fans all over the world who have liked, currently like, and sometimes even love our form of Sports Entertainment.’

McMahon said he is ‘extremely confident’ that WWE’s success will continue, saying he is leaving the company ‘in capable hands’, with Chairwoman and Co-CEO Stephanie McMahon and Co-CEO Nick Khan at the helm.

As the majority shareholder, he vows to continue to support WWE ‘in any way I can.’

‘My personal thanks to our community and business partners, shareholders, and Board of Directors for their guidance and support through the years. Then. Now. Forever. Together’, he signed off.