Vince McMahon started WWE SmackDown on Friday by welcoming fans to the show with a brief message.

The 76-year-old businessman has been replaced by his daughter Stephanie McMahon as CEO and chair until the conclusion of the board’s investigation into his and head of talent relations John Laurinaitis’ alleged misconduct.

Hours later, Mr. McMahon – who will retain his creative ‘role and responsibilities’ in WWE – came out in front of the live crowd to start the broadcast.

Fans could be heard singing along to his No Chance In Hell theme music, with some while some seemed to be applauding and cheering.

He described it as a ‘privilege’ to stand in front of the ‘WWE Universe’, and added: ”I’m here simply to remind you of the four words… Then. Now. Forever – and the most important word is together.

In a press release on Friday, the board of directors said McMahon has ‘voluntarily stepped back from his responsibilities as CEO and Chairman of the Board until the conclusion of the investigation’.

He will ‘retain his role and responsibilities related to WWE’s creative content during this period’, while his daughter Stephanie has been named interim CEO and interim Chairwoman.

Stephanie added: ‘I love this company and am committed to working with the Independent Directors to strengthen our culture and our Company; it is extremely important to me that we have a safe and collaborative workplace. 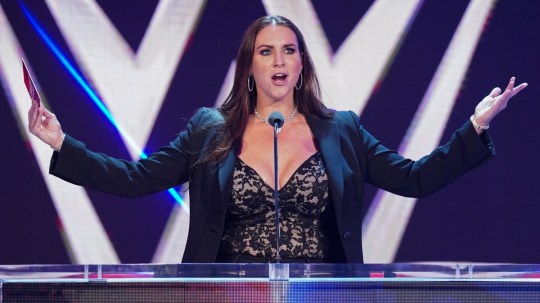 ‘I have committed to doing everything in my power to help the Special Committee complete its work, including marshaling the cooperation of the entire company to assist in the completion of the investigation and to implement its findings.’

The news comes after the Wall Street Journal reported that Vince made a $3million (£2.47million) settlement with a former employee with whom he allegedly had an affair.

It’s claimed the investigation began in April and has reportedly revealed other older nondisclosure agreements (NDAs) regarding allegations of misconduct made against Mr. McMahon and Mr. Laurinaitis.

The board said the allegations are being taken ‘very seriously’, while there will be a ‘comprehensive review’ of the company.

They said: ‘WWE and its Board of Directors take all allegations of misconduct very seriously. The Independent Directors of the Board engaged independent legal counsel to assist them with an independent review.

‘In addition, the Special Committee and WWE will work with an independent third-party to conduct a comprehensive review of the company’s compliance program, HR function and overall culture.’