Love Island or the football? A tough choice (Picture: ITV)

Viewers were left torn whether to watch Love Island or the end of England’s Euro 2020 match against Italy as both ended up airing at the same time.

The Euro 2020 final kicked off at 8pm with an early goal from England, but Italy equalising meant the game went to extra time.

This meant that it carried on past 10pm, when Love Island was set to begin over on ITV2, and viewers were left stressed as they tried to decide which to watch.

The official show account tweeted: ‘Sure there’s a lot going on rn, but we’re on @itv2 and @itvhub with the usual lols if you fancy it.’

Fans replied: ‘Read the room England is fighting for their lives’ and ‘I  bet you wished you aired it yesterday’.

Others were struggling to decide whether to watch the history-making game – the first time England’s men’s team had made a Euros final in 55 years – or see what happened when new bombshell Teddy Soares entered the villa and took four girls on a date. 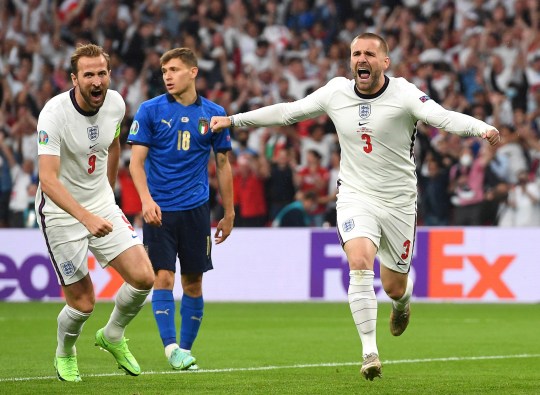 England v Italy in the Euro 2020 final was a once-in-a-lifetime event (Picture: EPA)

Love Island can be caught up on, England being in a bloody EC final cannot x

Read the room! Shouldâve put it on yesterday

could you not have stuck an old programme on for half an hour?? we wanna support england but also meet teddy and support our islanders

Viewers posted: ‘could you not have stuck an old programme on for half an hour?? we wanna support england but also meet teddy and support our islanders.’

Others added: ‘Sorry but the football has more drama than love island rn’ and ‘Love Island can be caught up on, England being in a b***dy EC final cannot x’.

While football and Love Island fans at home faced a dilemma, it was nothing compared to the Islanders who were not allowed to watch the game at all.

The gang have been in Spain since before the series started on June 28, leaving them blissfully unaware of how well England have done throughout the tournament.

It might be a tough decision what to watch, but at least fans – unlike the Islanders – will get to watch them in real time, whichever they choose.