Honoring her family. Vanessa Bryant appeared in an ad that advertised the Super Bowl’s return to Los Angeles while remembering her late husband Kobe Bryant and daughter Gianna.

In the spot, which premiered on the NFL network Sunday, February 13, the 39-year-old parked a purple vintage car in front of a mural of her late husband and daughter in downtown L.A.

“This is Los Angeles,” Vanessa says in the video. “The city of angels. Where iconic teams, where iconic moments and where icons have etched their place in the storybook of history. Where nothing is impossible without a lot of hard work and a little imagination.”

She’s not the only one who the NFL drafted to help promote the Super Bowl’s return to Los Angeles after a nearly 30-year absence. Ice Cube, Clayton Kershaw, George Lopez, Drew Barrymore, Ken Jeong, Jhené Aiko, Jay Leno and Shaquille O’Neal also popped up in various spots from NFL Media to promote the City of Angels ahead of Super Bowl LVI, which will pit the Los Angeles Rams against the Cincinnati Bengals on Sunday.

Vanessa’s solo ad features her monologue playing over highlights from Kobe’s career, including moments with his basketball team, the Lakers and his Oscar win.

Kobe and Gianna were two of nine victims who died in a helicopter crash in Calabasas, California, in January 2020. The athlete was 41 at the time. His daughter was 13.

The NBA player was survived by his wife and their three other daughters, Natalia, 19, Bianka, 5, and Capri, 2.

In an Instagram post, the mother of four explained that she couldn’t pay too much attention to the artwork behind her, which was created shortly after the tragic helicopter crash by local painter Sloe Motions. The massive mural depicts the athlete kissing a young Gianna on the head with the phrase “Mambas Forever” on the side. The yellow and purple colors represent Kobe’s team, The Lakers. 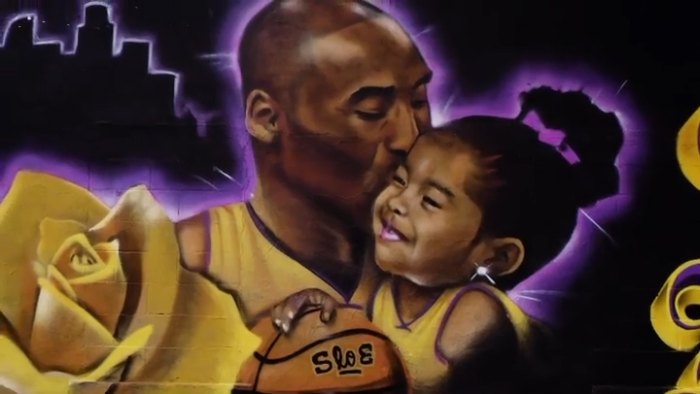 “I couldn’t look at the mural next to me until we wrapped. 💔💔 This city is special to me for so many reasons. It’s an honor to be a part of #ThisIsLA 💜💛 🌴,” Vanessa shared via Instagram on Friday, February 11.

The California native married Kobe in 2001 and has been open about her grieving process, sharing many public tributes to him. She honored her late spouse at his induction into the Naismith Memorial Basketball Hall of Fame in May 2021.