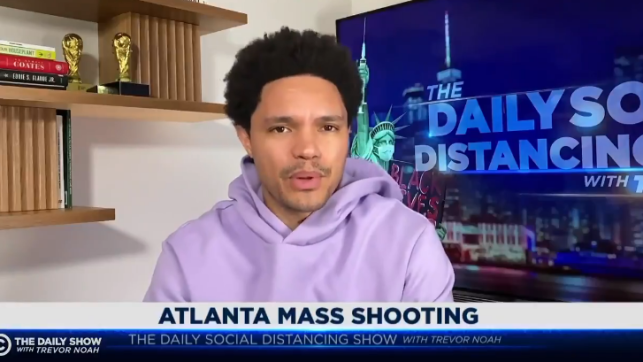 Trevor Noah has spoken out after eight Asian Americans were killed in Atlanta (Picture: Comedy Central)

Trevor Noah has denounced the horrific shooting of Asian Americans after Robert Aaron Long killed eight people in the US state of Georgia.

Long has been charged with eight counts of murder after allegedly opening fire at three massage parlours in the Atlanta area, telling police he was trying to ‘eliminate temptation’ because of his sex addiction.

Addressing the murders on The Late Show, Noah explained why he believes they were racially motivated and how it was only a matter of time before the atrocity happened.

‘What’s been sad about the story is not just the loss of life but all the auxiliary things that have been happening around the story,’ Noah began.

‘Like, one of the first things that’s been the most frustrating for me is seeing the shooter say, “Oh, it wasn’t racism, it was sex addiction.” First of all, f*ck you, man. You killed six Asian people. Specifically. You went there. If there’s anyone who’s racist, it’s a mother*cker who kills six Asian women. Your murders speak louder than your words.’

‘Six Asian women were killed!’ he exclaimed. ‘And you know, in a way, what makes it even more painful is that we saw it coming. We see these things happening. People have been warning.

The Atlanta shooter blamed a specific race of people for his problems, and then murdered them because of it. If thatâs not racism, then the word has no meaning. pic.twitter.com/4gIKN5hM28

‘We’ve seen this happening. And while we’re fighting for it, there are many people who have been like, “Oh, stop being so woke and so dramatic. Kung-Flu, hahaha. It’s just a joke.”

‘Yeah, it’s a joke that has come at one of the most-tense times in human history. You knew that something like this could happen.’

Noah continued: ‘This guy didn’t go and kill these women by mistake. He knew what he was doing. And it’s so frustrating to see this keep happening in America over and over again. 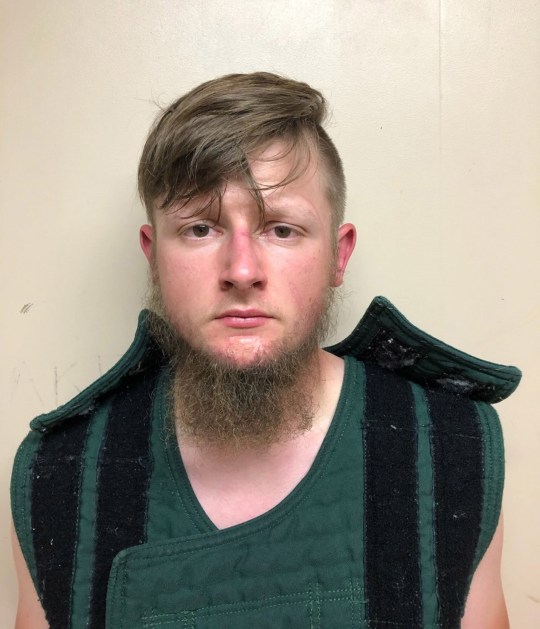 ‘America sees things coming, it knows something is gonna happen, but it does nothing to stop it. But then it’s all-in on saying, “Oh, it’s so tragic, who could have predicted this tragedy?”

‘Anyone who was looking at it could. Why are people so invested in solving the symptoms instead of the cause?

‘America does this time and time again—a country that wants to fight the symptoms and not the underlying conditions that cause those symptoms to take effect. Racism, misogyny, gun violence, and mental illness—and honestly, this incident might have been all of those things combined.’ 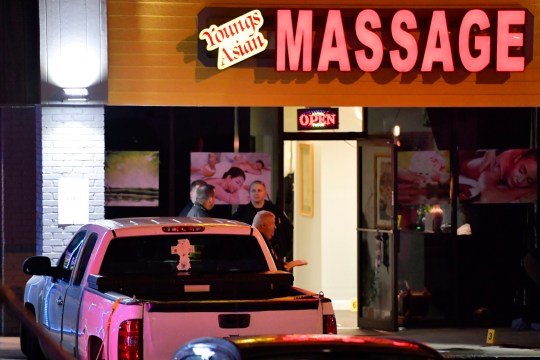 Noah concluded by encouraging his viewers not to believe the suspected shooter’s reasoning for the killings.

‘But whatever you do, please, don’t tell me that this thing had nothing to do with race,’ he said. ‘Even if the shooter says that—he thinks it has to do with his sex addiction—you can’t disconnect his violence from the racial stereotypes that people attach to Asian women.

‘This guy blamed a specific race of people for his problems and then murdered them because of it. If that’s not racism then the word has no meaning.’

Fans expressed their gratitude for Trevor’s no-holds barred remarks on the news and flooded Twitter with their remarks.

‘Thank you @Trevornoah for expressing everything I have been thinking and feeling today,’ wrote one.

‘Thank you, @Trevornoah, for really seeing America for what it is and telling us the ugly truth,’ another penned.

The shootings come amid a rise in attacks on Asian people in the US.