A woman diagnosed with motor neurone disease who appeared as a contestant on Tipping Point was able to get her voice back thanks to footage from the game show.

Motor neurone disease, the MND Association explains, is ‘a group of diseases that affect the nerves (motor neurones) in the brain and spinal cord that tell your muscles what to do’.

Affecting approximately ‘5,000 adults in the UK at any one time’, there is no cure for the condition, which can impact a person’s ability to talk, walk, eat and breathe, the organisation outlines.

The following year, she was diagnosed with MND, which resulted in her speech deteriorating at a rapid rate.

During an appearance on Good Morning Britain on Thursday morning, when she was reunited with Ben over video call, she explained that her husband Charlie suggested that they use the footage from Tipping Point to reconstruct her voice. 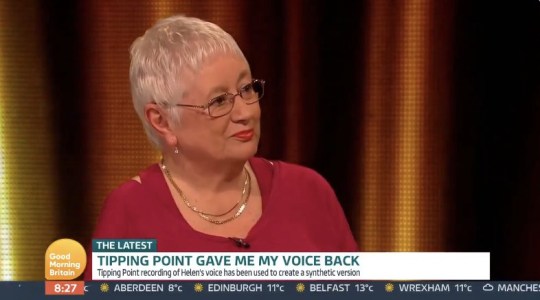 Helen was therefore able to communicate with Ben and his GMB co-host Charlotte Hawkins by having a machine read out what she wanted to say with a voice that sounds just like hers.

Ben was shown speaking to Helen and her daughter Gillian over video call from the Tipping Point set, with Helen and Gillian in the village of Neilston in East Renfrewshire, Scotland. 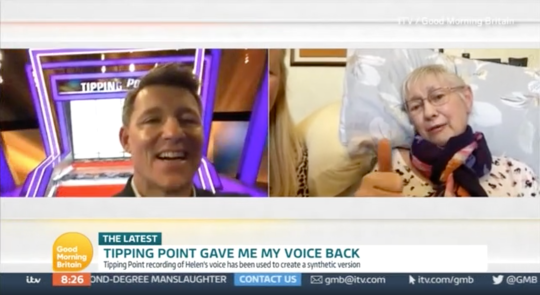 Helen gives Ben a thumbs up while speaking to him over video call (Picture: ITV)

‘It’s so lovely to see you. Look, this was the last time we met as well, right here, on set,’ Ben said.

‘I think it might have been the last time I was able to have a lovely hug as well,’ he added, as a clip was shown of him and Helen embracing on the stage.

Helen expressed her gratitude to Ben, stating: ‘Couldn’t have done it without you.’

‘That’s amazing. And that’s you! That’s you talking as well Helen, that’s fabulous,’ Ben responded with awe after hearing her voice.

Helen added that her husband was also the one who encouraged her to go on Tipping Point in the first place, as he was aware of her ‘competitive nature’ and her ‘will to win’.

When asked how it feels to be able to speak using her own voice, Helen said: ‘It is wonderful being able to talk to people and sound normal and not like a machine. My frustration has vanished and I can now have satisfactory conversations with everyone.’

Ben said it was ‘absolutely magical’ to speak to Helen and hear her voice, as he recalled her being a ‘ball of energy’ with a ‘little glint in her eye’ – a remark that made her smile. 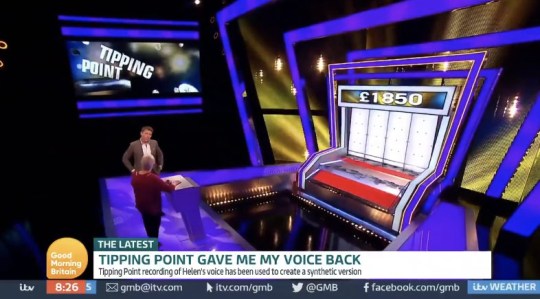 ‘This story is so heartwarming. Wow! From one Helen to another – take care and so pleased that you have your voice back. Wonderful interview,’ one person said.

‘I’m not crying… This was utterly beautiful. What a brilliant surprise for Helen. Totally uplifting and offering hope for others. Thanks to all involved,’ another wrote.

Someone else said that ‘tears were flowing’ while watching the interview.

Another shared that their mother died of motor neurone disease, writing: ‘I’ve tears in my eyes watching.’