This Morning’s Alison Hammond and Dermot O’Leary have jumped to Prince Harry’s defence after his interview with James Corden, saying that he ‘comes across really well’.

The Duke of Sussex recently appeared on James’ American talk show, where he spoke about his decision to step down as a senior member of the royal family with his wife Meghan, Duchess of Sussex.

Prince Harry said that it ‘was never walking away, it was stepping back rather than stepping down’, adding that he felt that the attention from the press was ‘destroying my mental health’.

During today’s edition of This Morning, journalist Camilla Tominey joined Alison and Dermot to discuss the interview, in the lead-up to Prince Harry and Meghan’s upcoming interview with Oprah Winfrey.

After Camilla said that she believed Prince Harry’s interview with James offered a one-sided view of the story, Alison defended the duke, expressing her belief that he would want to ‘steer the narrative’ so that it cannot be ‘invaded’ by journalists and photographers.

‘It’s difficult though because it’s about what narrative you want to steer it down. If he’s steering the narrative,’ Alison said. 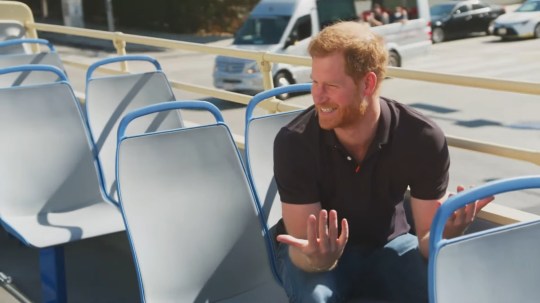 Prince Harry spoke about his and Meghan’s decision to step down as senior royals (Picture: CBS)

Alison added that she believes Prince Harry came across well in his interview with James from California, stating: ‘I’m going to be honest with you. I think he comes across really, really well. Especially with James Corden. He’s got such an amazing way.’

Dermot added that it’s important to listen to Prince Harry’s concerns about his mental health and understand why this impacted his and Meghan’s decision to move to the States from the UK.

‘We’ve got to take on face value, he said he’s moved there because of the mental health and wellbeing of him and his family.’

During his interview with James, Prince Harry delighted viewers when he rapped the theme tune to The Fresh Prince of Bel-Air.

An interview conducted by Oprah with the Duke and Duchess of Sussex is set to air on March 7.