Caption: This Is Going To Hurt: Who is Adam Kay and is he still a doctor?
Credit : Getty/REX/BBC

New BBC series This Is Going To Hurt premieres tonight, with seven episodes exploring the trials and tribulations of life as a junior doctor.

The medical drama brings Adam Kay’s real-life diary entries to life, as he details the chaos that comes with working on the NHS frontline.

Bafta award-winning actor Ben Whishaw will be taking the lead as Adam in the new adaptation.

This Is Going To Hurt will premiere on BBC One and BBC iPlayer.

Is This Is Going To Hurt based on a book?

This Is Going To Hurt is adapted from Adam’s memoir of the same name. 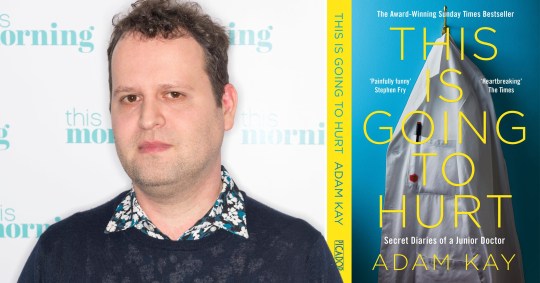 This Is Going To Hurt is a bestseller

The book details the secret comedy diaries of a junior doctor during his medical training from 2004 to 2010.

Released in 2017, the book is bursting with laughs while also depicting the gut-wrenching lows of life on a gynaecology and obstetrics ward.

Adam also discusses political issues within the healthcare system and his feelings on societal conflicts.

It is also available in audiobook form – narrated by Adam himself – which includes hilarious, shocking anecdotes that led to his eventual resignation from a career in medicine, before pursuing writing.

Most recently, Adam announced a follow-up to his bestseller, which will delve into life after hanging up his scrubs.

Which hospital is This Is Going To Hurt set in?

This Is Going To Hurt was filmed in London.

It is reported that most of the hospital scenes were shot on a custom-built set, but some scenes were filmed in Camden.

Adam, however, began his medical training after attending Dulwich College and Imperial College School of Medicine.

The official synopsis of the show reads: ‘At times hilarious, at times devastating, This is Going to Hurt is a series following Adam, a doctor who we find wending his way through the ranks of hospital hierarchy. Junior enough to suffer the crippling hours, but senior enough to face a constant barrage of terrifying responsibilities.

‘Adam is clinging to his personal life as he is increasingly overwhelmed by stresses at work: the 97-hour weeks, the life and death decisions, and all the while knowing the hospital parking meter is earning more than him.’

Watch This Is Going To Hurt tonight at 9pm on BBC One.