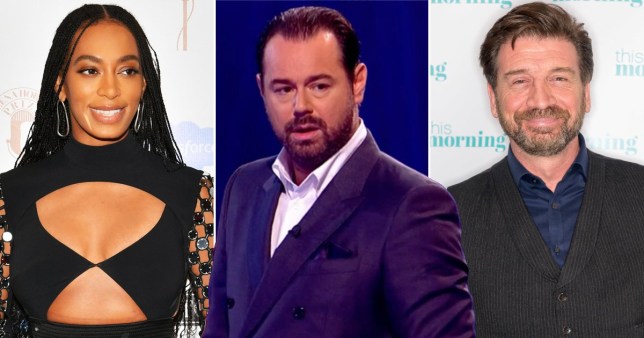 The Wall viewers were left in a state of utter astonishment as they watched a contestant on Danny Dyer’s game show hasten a guess that Solange Knowles – the younger sister of Beyoncé Knowles – is Nick Knowles’ brother.

On the latest episode of the BBC One programme, twin brothers Jack and Thomas, from Yorkshire, took part to try and win money to help out their mum and fund their university education.

In one part of the show, Thomas was placed in an isolation room, where he was tasked with answering questions without any knowledge of how Jack was doing in the studio with Danny.

One of the questions asked was: ‘Which of these famous siblings are the eldest in their family?’, the options being Pippa Middleton, Phil Neville, Solange Knowles and Luke Hemsworth.

Jack had no idea who Solange was, with his mum guessing that she could have some sort of relation to DIY SOS presenter Nick and Jack saying she could be his sister or mum.

Thomas appeared to have the same train of thought, stating: ‘Never heard of Phil Neville or Solange Knowles… oh might be Nick Knowles’ brother.’ 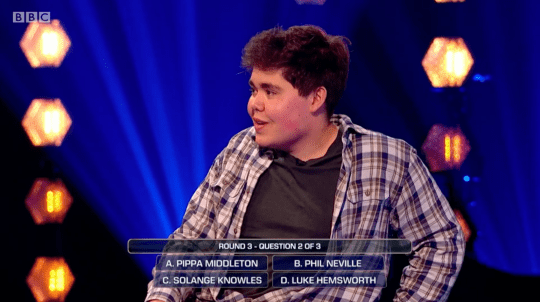 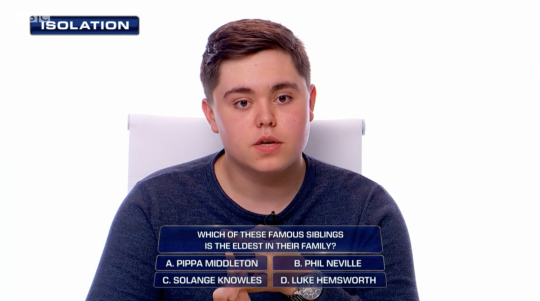 His twin brother, Thomas, also had no idea who she is (Picture: BBC)

Several people tuning in to watch the show couldn’t believe what was unfolding on their TV screens.

‘Someone on The Wall just got a question about celebrity siblings and thought Solange Knowles was Nick Knowles’ brother absolutely howling,’ one person said.

‘Contestant on The Wall thinking Solange Knowles is Nick Knowles’ sister. A classic TV quiz moment happening right before my eyes,’ another tweeted.

The brothers ended up answering the question incorrectly with Solange, the answer being that Luke is the older brother of Chris Hemsworth and Liam Hemsworth.

But they still ended up performing incredibly well, walking away with a massive £68,000 and leaving them and their family absolutely ecstatic.

‘Unflinching brotherly love. Wonderful to see,’ one person said after watching them hug in celebration of their massive win.

‘Anyone else crying at that win?’ someone else wrote about the emotional moment.

The Wall returns next Saturday at 6.45pm on BBC One.