Eddie Marsan has (jokingly) announced himself as the new 007 (Picture: PA)

Eddie Marsan fancies his chances as the next James Bond after playing John Darwin in The Thief, His Wife and The Canoe.

The 53-year-old has been praised for his performance as the disgraced conman in the ITV series, which is based on the real life story and follows a couple who, in desperate financial times, resorted to a preposterous plan to fake John’s death so that they could claim life insurance money.

As episode two aired on Monday night, Eddie slid into the Twitter commentary to pitch himself as the new 007, following in Daniel Craig’s footsteps.

Alongside a photo of himself in character posing beside a canoe in a swimsuit and holding a paddle, Eddie joked: ‘I’ve been keeping this quiet for some time but, I’m now so relieved to finally announce… that I’ve been a asked [sic] to be the new Bond.’

His followers were more than happy to humour his banter, with one quipping: ‘Basildon Bond ???’ as another replied: ‘Came here to say this but knew it my heart it would have been said already. Well played sir.’

‘Has anyone mentioned Dr Who that’ll be great as well as Bond (double whammy),’ one viewer suggested. 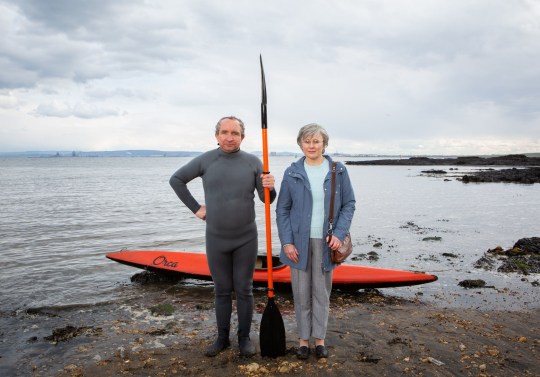 Another chimed in: ‘Thank goodness it’s as James Bond and not as Honey Ryder.’

Gladly handing the baton over to Eddie, one fan laughed: ‘You were always the bookies’ favourite! Welcome, the new 007.5!’

The Thief, His Wife and The Canoe is based on the inexplicably real life story of John and Anne Darwin (Monica Dolan), who found themselves in such severe debt in the 2000s that the real John, who worked as a prison officer, decided to pretend that he had disappeared at sea so that he and Anne could claim back life insurance money.

Not only was the scam far-reaching, with Anne having to convince her own sons that their father was gone, but it actually appeared to work for several years.

That is, until an incriminating photo of John and Anne taken at a property agent’s office in Panama was discovered on the internet, with the picture taken four years after John’s supposed death.

John decided to head back to the UK to try and persuade everyone that he’d had amnesia for the past five years, which is where episode two left off.

Eventually, the couple were found out, their lies exposed and their crimes punished.

The Thief, His Wife and The Canoe continues tomorrow at 9pm on ITV, while all four episodes are available on ITV Hub.