Digital storefronts and indie games go hand in hand. In the early 2000s the advent of Steam and the Xbox Live Arcade program meant smaller developers could get their games easily played the world over. This rise in indie gaming’s popularity also meant that the last two decades have seen players drown in a sea of choice; there’s so many games to choose from now that it’s often near-impossible to find something that clicks unless it gets widespread attention. There is a simpler way to find your next favourite indie game however, and it’s called the Super Rare Mixtape.

A collection of curated indie games and demos, the Super Rare Mixtape is the brainchild of Ryan Brown at Super Rare Games – a publisher with a laser focus on physical releases of small, but still popular, titles. Now up to its newly announced third instalment, this upcoming Super Rare Mixtape has a grand total of thirty games and six demos on a USB drive shaped like a mixtape, and it even includes seven developer audio commentaries and 24 concept art galleries.

NME got the chance to speak with Brown about the Mixtape’s inception, and why preserving physical copies of indie games has become such an important industry-wide issue.

Brown says the idea of the Mixtape was one he’d had for around 15 years, where titles from indie developer-focused sites like Newgrounds and itch.io can find another home. “Giving a curated selection of those sorts of games that wouldn’t usually get a physical version a cool, unique physical way of being played is a nice way to highlight them and get some attention on them,” Brown explained.

Whilst these games could just come on a regular USB drive, disguising it as a mixtape always felt like the right move according to Brown. Instead of featuring an eclectic blend of music, this mixtape houses games of different art styles, genres and lengths. “The physical tape cassette design just felt like a perfect way to present that,” said Brown. “It’s a cool displayable collectible in itself!”

According to Super Rare Games, the list of titles on each Mixtape is “personally curated” to provide players with a little bit of everything, like an indie game minestrone soup. To get these perfectly selected ingredients, Brown says he looks through his hard drive of over 50,000 games.

“I basically look for that perfect mix to avoid too many of any certain types or looks of games springing up too often,” Brown explained. “The point of the Mixtape is that you can try a whole bunch of games and if you don’t like one, it’s no big deal, as the next is going to be something entirely different. There’s a surprising amount of thought that goes into perfecting the roster for each volume.” 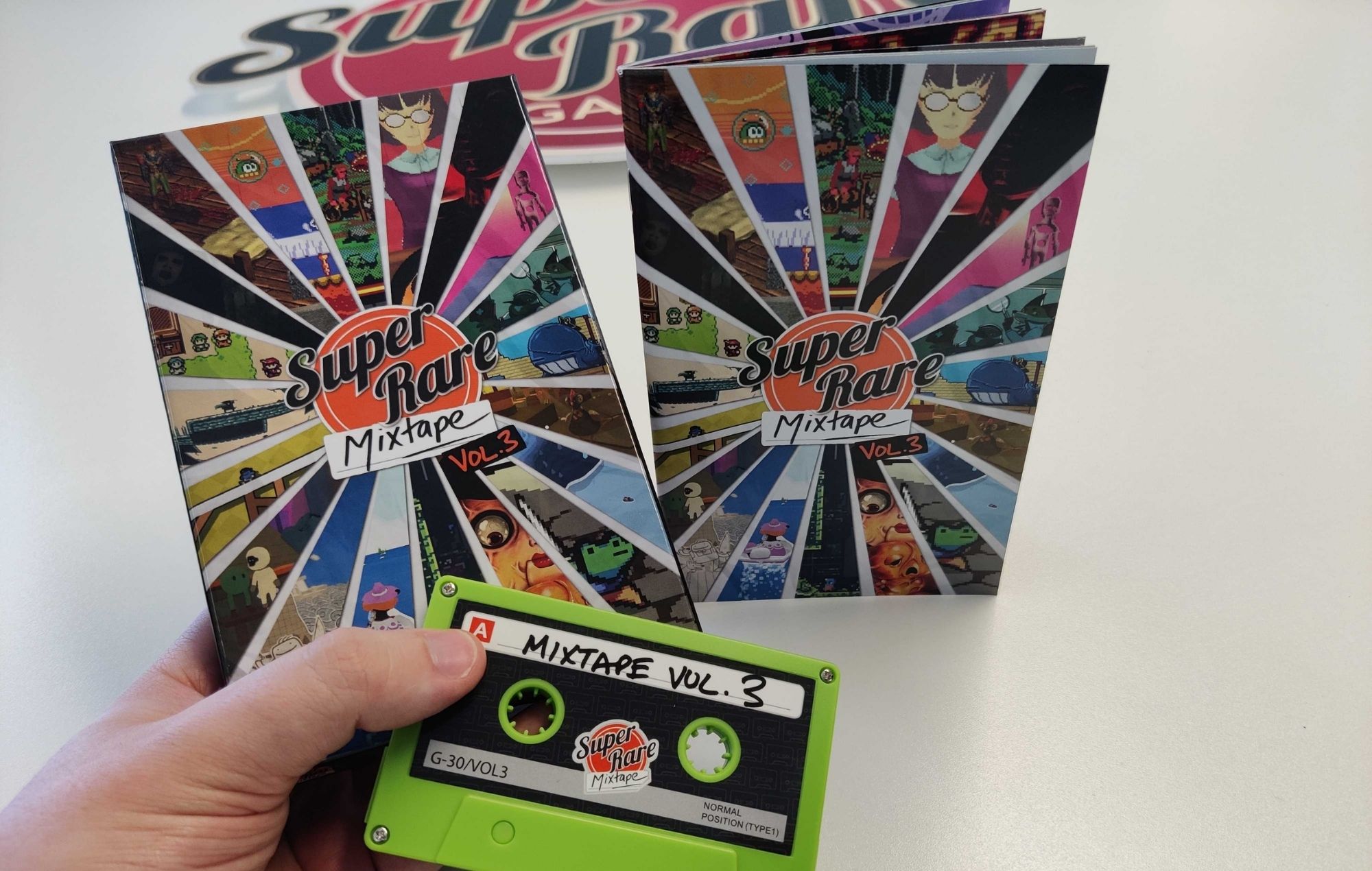 When putting this perfect mix together, the first problem Brown has to overcome is making sure every game is on equal billing. This is why the cover of each volume has as many games on it as possible and the custom games launcher lists everything alphabetically, to play no favourites. There’s also a manual dedicated to explaining each game, acting like a curated restaurant menu, to let players feed their appetite how they see fit.

For those that grew up with the original PlayStation in the ‘90s, this mixtape will feel eerily similar to classic demo discs as well. Brown is going for “that kind of level of curiosity and intrigue where you don’t know what’s coming next,” and just like back then, you may just find your new favourite game.

Despite the retro inspirations and aesthetic, the Super Rare Mixtape also taps into a modern consideration: game preservation. Super Rare Games already gives out some of its physical prints of games to museums and organised preservation efforts, and the Mixtape is no exception. Having a collection of 30 plus games on a hard drive means that should any of its games be removed from sale, there’s still a physical place they exist. 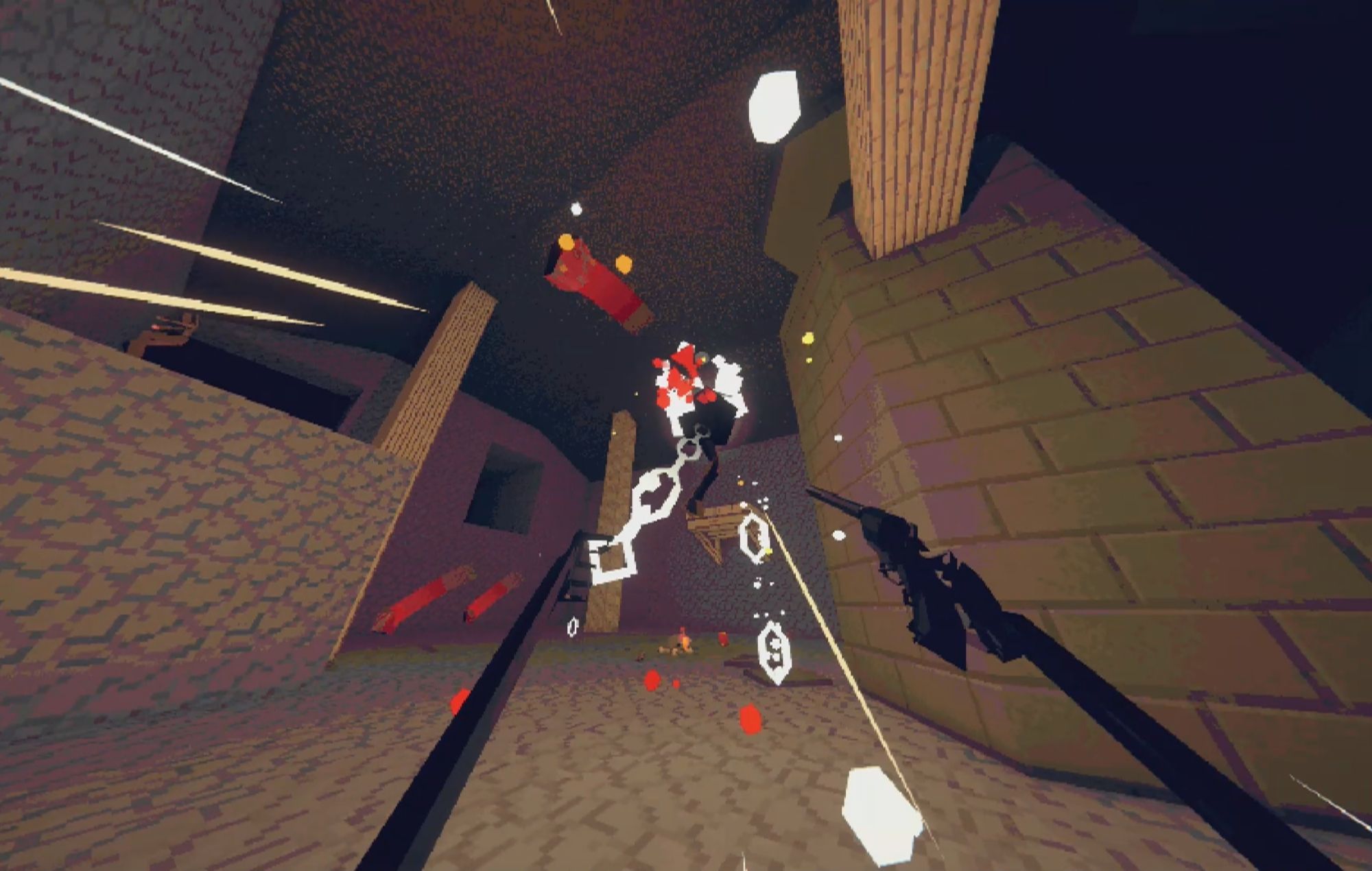 Enchain, which has a demo on the Mixtape. Credit: mattlawr

“Many games on the Mixtape volumes have garnered some degree of popularity already,” said Brown. “But many have not and only a handful of people around the world have ever heard of them. Every game has a history worth preserving, so I’m really thankful I get to be a part of preserving that for some of these smaller titles.”

This preservation effort led to the Mixtape not only offering players behind-the-scenes tidbits, but also providing valued context and development history in the same package as well. Brown understands that the history of the games industry isn’t just saved with a full copy of a game when it releases, but with the culture and story that allowed it to exist in the first place as well.

“Some of the developers questioned why I’d even want them to scan their initial doodles, or record themselves talking about the history of the game’s development for a few minutes, but it’s all deeply interesting and important to me to preserve those aspects of game development.”

At present the recorded history is just concept art scans and developer commentaries, but Brown hopes that down the line a built-in music player and copies of trailers could help with each mixtape’s preservation efforts.

In some ways, the Super Rare Mixtape harkens back to a bygone era of the video game industry. Most people still buy physical games, but the rise in digital ownership and looming online store closures have raised a lot of questions about where our industry is headed. Whilst the answer to those questions won’t be found here, Brown explained how the Mixtape purposefully does away with many of these modern gaming concerns to let players just get to the good stuff: the games.

“There’s no DRM or lock on the tape cassette-shaped USB. You can lend it to a family member, or friend, and if you feel like you’ve got your use out of it, you can sell it. It’s yours. It’s never going to be removed or delisted,” said Brown. “As much as the preservation aspects, and showcasing under-the-radar games, is a great, easily accessible package, it really is about that sense of ownership too.”

The Super Rare Mixtape Volume 3 goes on sale on May 26 at 6PM BST, with 2,000 copies available of the PC game collection.