The Simpsons has been keeping us entertained for over 30 years, with the show now in its 33rd series.

But as well as keeping us all amused, the antics of Homer, Marge, Bart, Lisa and Maggie have also proven to be strangely prophetic at times – with several major world events having been ‘predicted’ by the show.

From Donald Trump’s presidency through to the Covid pandemic, the show has been cited with getting an awful lot correct about the real world – and they’re still doing it to this day.

So just what did the Simpsons predict would happen in 2021?

While they may not have predicted Joe Biden per se, the 2000 episode Bart To The Future did see Lisa, as the first female president of the United States, taking over from Trump and picking up a whole lot of debts.

The scene in question sees Lisa, in the Oval Office, saying: ‘As you know, we’ve inherited quite a budget crunch from President Trump.” When she asks Secretary Van Houten (aka the grown-up Millhouse) how bad it is, he tells her: ‘We’re broke’.

With concerns over the Capitol riots and the pandemic, Joe Biden’s inauguration in January 2021 was a more low-key affair, bolstered by a TV special hosted by Oscar-winning legend Tom Hanks.

It turns out however that The Simpsons may have predicted that too – with Hanks appearing in a scene in 2007’s The Simpsons Movie, in which he delivers a similar address to the nation. ‘The US government has lost its credibility, so it’s borrowing some of mine,’ he proclaims in a TV advert screened after Springfield has been placed under a glass dome.

Once again, Twitter noticed, with one user saying: ‘How do the Simpsons always predict this s**t?’ We have no clue.

That same inauguration saw Kamala Harris sworn in as the first ever female Vice-President – with the new second-in-command wearing a smart purple suit and necklace for the occasion.

Which, as many Simpsons fans were quick to point out, bore a stark resemblance to the purple two-piece and necklace Lisa wore when she was sworn in as President in Bart To The Future. Honestly, you couldn’t make this stuff up. 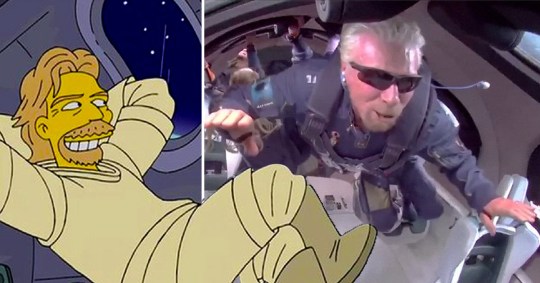 The Simpsons got the Branson spaceflight right (Picture: Fox/Virgin Galactic)

A week before his 71st birthday in July, Branson successfully flew aboard the VSS unity, which touched down at Virgin Galactic’s New Mexico hub Spaceport America after offering its passengers a view of Earth and four minutes of weightlessness.

However it wasn’t long before Simpsons fans realised a Branson lookalike did the same in season 25.

The image was simply captioned ‘The Simpsons predicted it.’

The riots at the Capitol in Washington DC in January 2021 shocked the world – but Simpsons viewers couldn’t help noticing the resemblance to one of the storylines from a 2020 Halloween special.

In The Simpsons’ 31st Treehouse Of Horror episode, the Fox show made a pretty damning projection revealing how bad the US could turn out, after Homer fails to cast his vote.

When he wakes from a long slumber, he realises he’s missed out on his vote but asks ‘how bad can it be?’

The cartoon then fast-forwards to Inauguration Day on January 20th 2021, where Springfield is thrown into the apocalypse – with Homer sitting on the roof of 742 Evergreen Terrace dressed in body armour made from household utensils, while the town burns.

‘Simpsons did it again’ wrote one person on Twitter at the time. ‘I just can’t wrap my head around how they seem to predict every possible thing that happens in this country.’

It’s already been suggested that The Simpsons predicted the Covid pandemic – with the ‘Osaka flu’ which swept through the episode Marge In Chains in 1993 – but now there has been speculation the show’s creators may also have been on the money about the Omicron variant.

The theory started after one social media users sliced together news montages alongside a scene from The Simpsons which shows an alien stating they are from the planet Omicron Persei 8.

The clip comes from Matt Groening’s other show Futurama, rather than The Simpsons – but that didn’t stop fans suggesting The Simpsons had something to do with it.

In this case though, since Omicron is a Greek letter, it would seem to be just pure coincidence.

The Simpsons currently airs on Sky One and Channel 4.