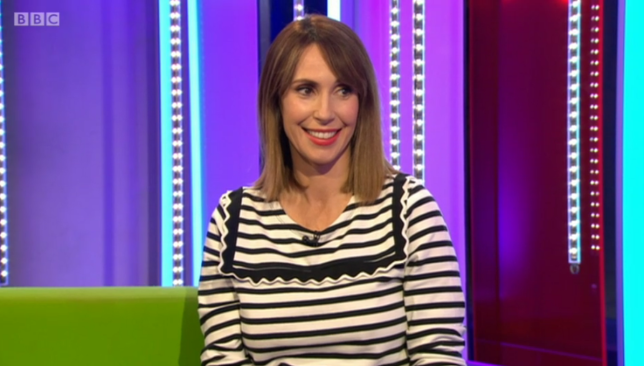 Alex and her husband are expecting their third child (Picture: BBC)

The One Show’s Alex Jones has expressed how ‘overwhelmed’ she feels after receiving ‘lovely messages’ from fans over the news of her pregnancy.

On Thursday evening, Alex announced on-air of the BBC One show that she is expecting her third child with her husband, insurance broker Charlie Thomson.

Since the show, the Welsh TV presenter has been inundated with messages of support from fans on social media.

On Friday’s edition of the programme, Alex, 44, opened the show with a message of gratitude for everyone who has reached out.

Sitting alongside co-presenter Ronan Keating, she said: ‘Before we start I have to say a huge, huge thank you for all the lovely messages that you’ve sent on our Instagram and our email last night after the news. If you missed it, I’m having a baby.

As Ronan whooped, she continued, adding: ‘But thank you, honestly, I’ve been overwhelmed and I’ve read all of your messages. Thank you so much.’

When Alex announced her pregnancy, she revealed that the upcoming arrival of her and her husband’s third child – a baby girl – came as a bit of a surprise.

‘I feel really nervous all of a sudden. It just seems like a good time to share some news with everybody, and the crew in the studio for the first time,’ she said.

‘I mean lockdown has been anything but predictable and we’ve had some really unexpected news – baby number three is on the way.’

On Instagram, she shared a black-and-white picture of her and her family holding up a board that reads: ‘Coming Soon… Baby Number 3.’

‘The best surprise ever,’ she wrote in the caption, alongside a heart emoji.

‘This is AMAZING!!! Xxxxx,’ commented I’m A Celebrity… Get Me Out Of Here! 2020 winner Giovanna Fletcher.

Alex gave birth to her first child, a son called Edward, in January 2017.

In May 2019, she and her husband welcomed their second child, a boy named Kit.