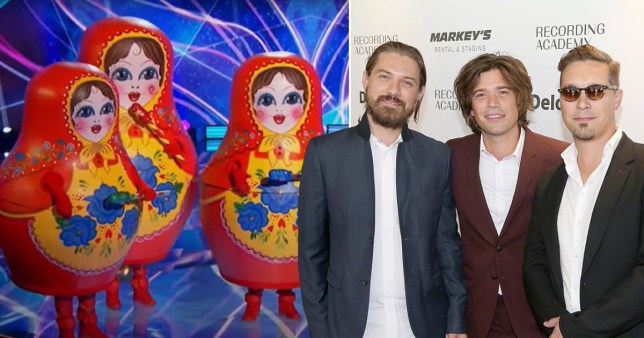 The Masked Singer fans are convinced Hanson are the Russian Dolls (Picture: Fox/Getty)

The Masked Singer is continuing to pull it out of the bag in season five as more amazing stars take to the stage behind their intricate costumes.

Viewers are desperate to see if the celebrities behind the Russian Dolls, because all bets are on a famous band of brothers.

Yep, most fans are pretty sure they’ve figured out who the famous faces might be when the costumes come off.

So here are the top guesses for the singing group.

What clues do we have for the Russian Dolls?

When the doll was first revealed, he spoke of being thrown aside when newer toy fads came along to fill the shelves after they had once been the hottest toy in the world.

Russian Doll noted they have been, for some time, doing their own thing.

Cluedle-Doo’s clue noted a Russian Doll can sometimes have 15 replicas of itself, and that much has been proved because there are now three Russian Dolls.

However, it’s also been teased that there was a fourth Russian Doll on the way.

What are the guesses for the Russian Dolls?

Talk to any @hansonmusic fan and weâll tell you that we can recognize the brotherâs voices in a heartbeat. From the very first note of the very first song, I knew! Which is why I truly believe that the Russian Dolls on Season 5 of the Masked Singer are in fact Hanson.

The amount of serotonin I get from @Hanson, and them on this round of The Masked Singer (come on guys, we known ITZ you ð) is amazing.
Always been that way though, even though I’m mostly a “metal head” my go to is Hanson. Over 25 years of being a fan.

Everyone is pretty certain that Russian Dolls are the Hanson brother.

Isaac, Taylor and Zac were part of the most popular boy bands in the 90s thanks to songs like MMMBop.

Naturally, this means their voices are pretty recognizable to their legion of fans.

Ok, the Russian doll on Masked Singer HAS TO BE HANSON, right? Right?

The costume also lines up with the noticeable height difference between Isaac and Taylor, with Isaac in the main costume and Taylor in the second one.

Their character clues seem to reference both the size of their family and their path familiar to boy bands everywhere, which involved being the biggest thing around until the next boy band comes along.

However, some of the judges’ guesses are that the Russian Dolls are Boyz II Men or Lady A.