You literally couldn’t pay James Buckley any money in the world to revisit Inbetweeners (Picture: rex/Getty)

Still longing for an Inbetweeners reunion? Think again because James Buckley has well and truly ruled himself out of ever repressing his role as Jay Cartwright ever again.

The actor, 34, starred as sex obsessed Jay for all three series of The Inbetweeenrs as well as the two movies.

However, appearing on Chris Moyles’ Radio X show today, James said there is literally ‘not enough money in the world’ that make him even consider revisiting the coming of age sitcom.

Actually, he wouldn’t even read the script.

‘I don’t want to go near it anymore,’ he said. ‘Not because I don’t think I would have an amazing time doing it, because I know I would.

‘I love the boys, I love the writers. Doing ‘The Inbetweeners’ was the best job in the world.’

Chris told James he’d ‘never escape’ The Inbetweeners, but even if he would never star in any proposed reboots of the show, he doesn’t actually want to runaway from the comedy that launched his career. 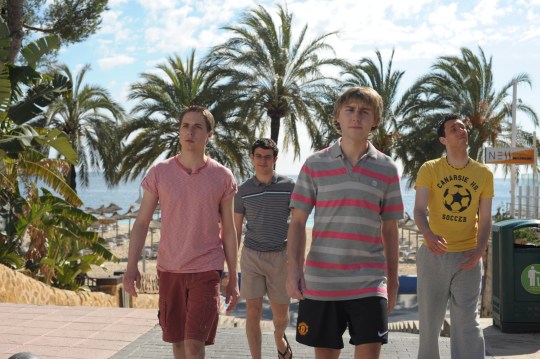 ‘You know, you can either go two ways with that,’ he explained.

‘And yeah, listen, as an actor, it’s difficult professionally for me to move away from that character. But you can’t have it all, can you? You can’t be in a big hit sitcom, and then moan about it after.’

In 2019, The Inbetweeners cast reunited to mark its 10th anniversary in a special titled Fwends Reunited.

However, fans blasted the episode hosted by Jimmy Carr as ‘awful’ and ‘awkward’.

Responding to the backlash at the time, James said on his podcast, Completed It Mate: ‘It became a thing that wasn’t a celebration of this good thing I did in my life, it was me being taken the piss out of for hours on end.

‘I didn’t have the personality or the intelligence to cope with it, especially when you’re up against someone like Jimmy Carr, who’s super quick and super funny.’

The Inbetweeners is available to stream on All 4.