Warning: spoilers ahead for The Handmaid’s Tale season 4 episode 4.

The Handmaid’s Tale star Madeline Brewer has opened up to Metro.co.uk about Janine’s pivotal flashback scene in season 4 episode 4, outlining how the storyline had to be changed due to the Covid-19 pandemic.

In a dystopian world rife with terror and despair, Janine has been a beacon of light in The Handmaid’s Tale ever since its 2017 premiere, remaining inherently good at heart despite the many horrific experiences she has endured.

The latest episode of the show gave viewers a greater insight into Janine’s backstory, as a flashback showed Janine seeking an abortion before the authoritarian rule of Gilead took over the United States.

In the throwback to Janine’s old life, a worker at a crisis pregnancy centre harshly pressures her into not having an abortion, before a medical professional at a different facility gives her abortion pills.

During a recent conversation with Metro.co.uk, Madeline explained that her flashback was supposed to play out differently, but had to be altered as the coronavirus outbreak meant that they couldn’t have too many people on set. 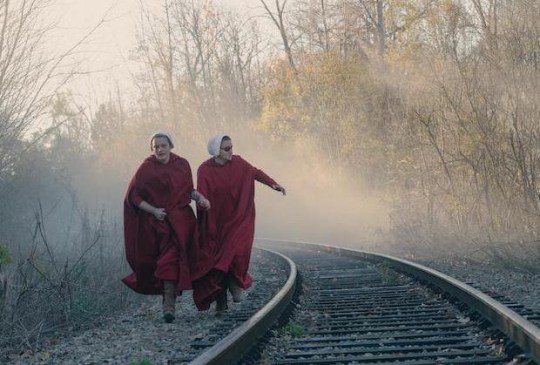 June and Janine managed to escape after their fellow Handmaids were killed (Picture: Hulu)

‘My entire flashback changed completely. Everything about Janine’s flashback was pretty much supposed to be different and then everything got changed,’ she said.

While the scene includes references to Janine’s job at Denny’s, the Orange Is The New Black star said that the flashback was originally supposed to show her serving a family at the diner.

‘There was a little throwback to season one, that was really cool. They didn’t want to have that many people inside, then we tried to move it outside,’ the actor stated.

Viewers were also ‘supposed to see her going into the clinic and people protesting outside and kind of yelling things at her, which is a very real thing that happens to people who are seeking abortions’, she said. 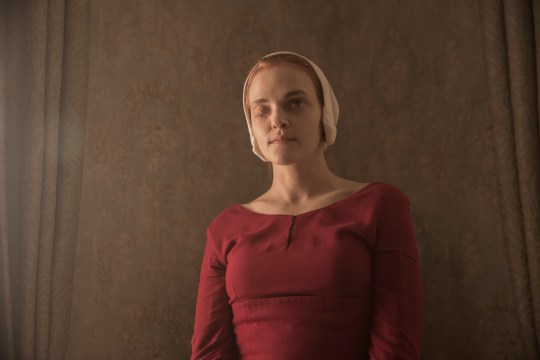 ‘We lost some really important stuff because of Covid,’ the actor said (Picture: Jasper Savage/Hulu)

‘It’s frightening and it feels very dangerous, but it is such a real thing that happens that I would have loved to show, but we lost that to Covid. We didn’t want to have that many people in close proximity. We lost some really important stuff because of Covid,’ Madeline added.

In the present day, Janine and June (Elisabeth Moss), the only surviving Handmaids from their close-knit group, manage to escape Aunt Lydia (Ann Dowd) by stowing away on a train heading to Chicago, travelling in a carriage filled with freezing cold milk.

After being confronted by Janine, June confesses that she gave up the location of the Handmaids’ safe house while she was being tortured, resulting in Janine standing up to June and the pair exchanging some cutting remarks with each other.

In Janine’s eyes, June was her ‘protector, very good friend and sister’, Madeline said, which is why it made such a huge impact for Janine to acknowledge and criticise June’s missteps. 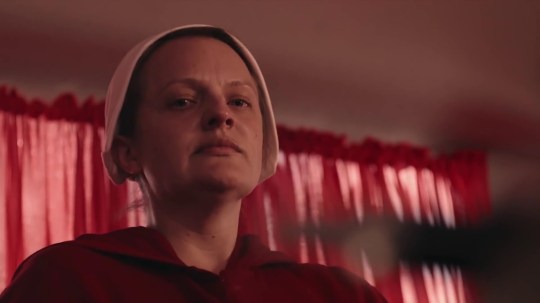 The Handmaids were recaptured after June gave up their location (Picture: Backgrid/Hulu)

‘It’s like don’t meet your heroes, kind of thing,’ the actor said. ‘June is her hero and then she sees the cracks in June’s armour and that June is only human.’

While June’s ‘human instinct is to seek revenge’, Janine’s instinct leans towards ‘love, safety and nurturing’, Madeline said, which is highlighted during their heated quarrel.

Madeline said that it was ‘really powerful’ to play that particular scene opposite Elisabeth, as Janine has always held June in such high regard.

‘I think that she really, really regards June, she has a lot of respect for June, so to criticise her… it took something like watching her two very close friends get hit by a train, it took that to make Janine kind of stand up to June,’ she detailed.

However, Madeline thought that Janine may also be feeling ‘a lot of guilt’ in that moment over her friends’ deaths, which may have fuelled her anger towards June.

The Handmaid’s Tale returns next Sunday at 9pm and is available to watch on All 4.