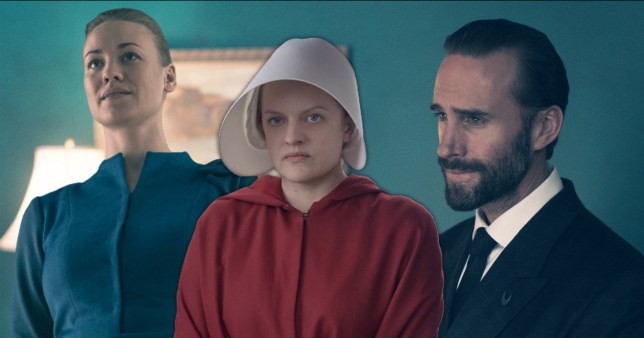 Could June be exchanged for the Waterfords as the dangerous couple return to Gilead? (Picture: Hulu)

As season four of The Handmaid’s Tale launches in the US on Hulu, rumours are swirling as to what will become of June Osborne (Elisabeth Moss) while on the run in Gilead.

While fans in the UK still have to wait to watch the latest instalments of the dystopian thriller, many are desperate to find out where June’s journey will lead her next, after she decided not to board a plane and reunite with her husband Luke Bankole (O.T. Fagbenle) in Canada at the end of season three.

The trailer for season four hinted at how Serena Waterford (Yvonne Strahovski) and Commander Fred Waterford (Joseph Fiennes) are doing since we saw them last, having been arrested by the Canadian authorities.

Despite being accused of horrendous crimes – which we know they are guilty of following their atrocious treatment of June – the sneak peek seems to show that their fortunes may have turned.

One theory is that Serena may have discovered that she’s pregnant, which could be perceived by the public as so miraculous that she and Fred can be exonerated for their crimes.

If this is the case, perhaps this means that an exchange between the Waterfords and a certain someone in Gilead is on the cards?

Could June be swapped for the Waterfords in a trade-off?

In one of the descriptions for an episode in The Handmaid’s Tale season four, it’s implied that June is imprisoned once again.

Although she decided to remain in Gilead so that she could try and save her daughter Hannah (Jordana Blake), if she has been captured, this could mean that her fate is no longer in her hands.

If it turns out that Serena is pregnant and requests to return to Gilead with her husband, it may be that the only way the Canadian authorities would allow that to happen is if Gilead releases a very high-profile prisoner in return.

Given June was behind the operation that resulted in a plane full of children successfully travelling to Canada, there’s no doubt that those in charge in Gilead would want to see her executed.

But, if her release means that one of the most powerful couples in Gilead can resume their posts, it may be something that they’re willing to consider.

While a release date hasn’t yet been confirmed for The Handmaid’s Tale season four in the UK, we would suspect that it won’t be too far off given the launch date for season three was just a few days after the US.

Here’s hoping all of the answers to our burning questions will be answered in the very near future.

The first three seasons of The Handmaid’s Tale are available to watch on Amazon Prime Video.