Gillian Anderson has spoken about how ‘fear’ made her feel reluctant to share her voice for Margaret Thatcher while rehearsing for The Crown season 4, explaining that she didn’t want to ‘get it wrong’.

On 15 November, Netflix released the latest season of period drama The Crown, depicting the lives of the royal family from 1977 to 1990.

The new season saw several new additions to the cast, including Emma Corrin as the late Diana, Princess of Wales and Gillian as Britain’s first female prime minister.

While Gillian, 52, has received rave reviews for her performance as the Iron Lady, with fans calling for her to win awards for her ‘impeccable’ portrayal of the Tory politician, the actor has admitted it took her awhile to feel comfortable sharing her version of Thatcher’s drawn out voice.

‘I started on the voice very early, but didn’t reveal the voice until quite late, because, even though I was working with somebody, I don’t know… partly fear,’ she told Melvyn Bragg during an interview for Sky Arts.

‘Even when we started to do the rehearsals or read throughs and stuff like that she would kind of show up here and there, and people would pat you on the back, when it actually came time to getting closer and closer to the doing it, it really took a kick up the rear.’ 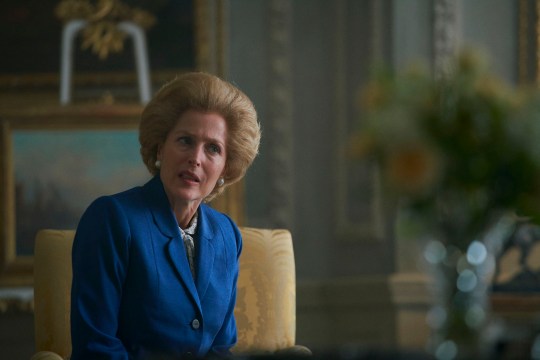 Fans of The Crown have called for Gillian Anderson to win awards for her portrayal of Margaret Thatcher (Picture: Des Willie/Netflix)

Gillian recalled her partner, The Crown creator Peter Morgan, asking when the character of Margaret Thatcher was going to ‘come out’.

‘I think Peter said, ‘Where is she? When is she coming out?’ And he was absolutely right, because I just wasn’t quite yet, I don’t know,’ Gillian said.

‘I didn’t feel like the environment was quite – not safe enough – but whatever I’d made up in my mind, it just wasn’t… I wasn’t ready.’

The Sex Education star explained that her reluctance to share her version of Thatcher’s voice came down to ‘a lot of overthinking’.

‘A lot of, not necessarily anxiety, but really not wanting to get it wrong,’ she added.

Gillian recently spoke to Zoe Ball on BBC Radio 2 about how both her partner Peter, 57, and The Crown’s casting director had the idea to cast her as the 1980s prime minister.

‘I think all actors are interested in complex characters and given how divisive she was, she definitely is about as complex as one gets,’ she said.

‘It wasn’t a difficult thing to say yes to. I was a huge fan of the show and had huge respect for all the actors who’d been on it before. So it felt like something that I couldn’t not say yes to.’

The Crown season 4 is available to watch on Netflix.

Gillian Anderson will appear on The South Bank Show tonight at 10.45pm on Sky Arts, Freeview 11.