The Twins definitely have something up their non-existent sleeves (Picture: Lucasfilm Ltd/Disney Plus)

Warning: spoilers ahead for The Book of Boba Fett.

The Book of Boba Fett has provided Star Wars fans with an in-depth insight into one of the franchise’s most legendary bounty hunters throughout the past three episodes on Disney Plus, as he takes his seat as the new crime lord of Tatooine.

At the end of The Mandalorian season 2, Boba Fett (Temuera Morrison) killed the previous ruler, Bib Fortuna, who took over the throne after Jabba the Hutt’s death in the original film trilogy.

However, Boba and his right-hand woman Fennec Shand (Ming-Na Wen) face new competition in the form of the Twins, who are accompanied by the ferocious Wookiee warrior Black Krrsantan (Carey Jones).

In episode three, Boba and the Twins forged something of a truce after they sent Black Krrsantan to kill him while he was recovering in his bacta tank, presenting him with a Rancor and its trainer (Danny Trejo) as a peace offering gift.

So what is the Twins’ agenda if they’re willing to give up their claim for Tatooine so easily? 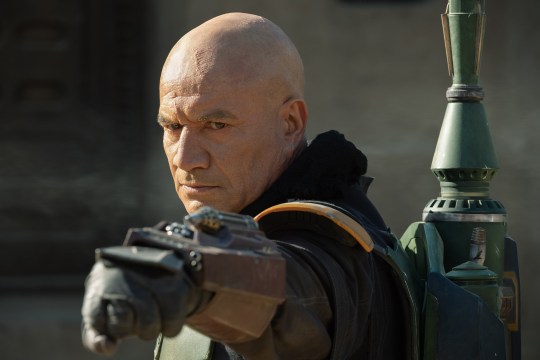 Boba is right to question their motives (Picture: François Duhamel/Lucasfilm Ltd/Disney Plus)

One fan on Reddit who goes by the handle u/Orcas_are_badass speculated in a post on what their real plan could be, which has the possibility of leading into season two of The Book of Boba Fett – if the show is renewed and isn’t just a limited series.

They explained that they believed the Twins would encourage Boba and the Pykes – who he has a feud with stemming back to his time with the Tusken Raiders – to fight against one another, resulting in their own power growing.

‘Instead of wasting your own troops in a war between two enemies, supply the weaker side with weapons so that both sides experience more bloodshed and your power/influence grows,’ they said.

‘They first claimed the territory for themselves, but when they learned the Pykes claimed it as well they gave Boba a Rancor and a Wookiee and acted like it was a friendly move. Those aren’t enough to take on an army, but they ARE enough to weaken the Pykes.’

Someone asked what you wanted to see in E3 of Bobba Fett.

I said, more Rancor. And they delivered! You just know that Rancorâs going to make calamari out of the Pykes. pic.twitter.com/vTctzpN950

They therefore predict that the ‘major conflict going into season two’ will be that the Twins will ‘expect Boba to act like he owes his victory to them’, which will mean he’ll ‘either need to work under them or will have to go to war against the Hutt’.

An interesting theory… but what do other Star Wars fans think?

One Reddit user commented that they thought the theory was ‘spot on’, and could lead to Boba calling in ‘a few favours’ in the finale from individuals including The Mandalorian’s Din Djarin (Pedro Pascal) as he goes to war.

Another pointed out that it doesn’t make sense for all these different parties to be fighting over Tatooine unless it’s worth something… so they think there could be more to the land than just desert, particularly given Stephen Root’s cameo as a disgruntled water vendor in the region.

‘Also….I think Tatooine is worth something. Like REALLY worth something. The lady Twin called it a worthless rock. But why want it if it’s worthless. The water dealer was cut off before he got to his interesting story,’ they remarked.

Some wondered whether the powerful Rancor will remain faithful to Boba – given the trainer said that the creature imprints on the first person they see – or if it is secretly part of the Twins’ plan and will turn on the bounty hunter when the going gets tough.

Elsewhere, we need to know what happened to the Tusken Raiders, as we refuse to believe that the entire community was wiped out in the devastating attack that was shown in the latest episode.

Our bet is that the young Tusken Raider who befriended Boba may have grown up and will join the fight… perhaps with Din and other Star Wars icons at their side.

The Book of Boba Fett is available to watch on Disney Plus with new episodes released on Wednesdays.