A Bachelor no more! After two years of dating, Chase McNary and girlfriend Ellie White are officially engaged.

“It was always you 💍,” the Bachelorette alum, 33, wrote via Instagram on Saturday, July 2, sharing several photos from the pair’s mountainside proposal.

McNary, who announced his romance with White in May 2020, got down on bended knee in Breckenridge, Colorado, beside a picnic arrangement that had been decorated with candles, lanterns and a decorated letter “M” for his last name. The pair also toasted their upcoming nuptials with a bottle of champagne.

“Take me off the roster 🤍 Forever his 🤍,” the Haut Bas designer wrote via her Instagram on Saturday.

As the duo celebrated their engagement, several of the Ex on the Beach alum’s reality TV costars chimed in, offering supportive messages.

“Congratulations Y’all!!! But be honest, she knew this was coming,” Wells Adams, who competed alongside the Colorado native on season 12 of the ABC dating series, wrote via Instagram comment. “I mean, that’s a ‘I’m getting a fat diamond today’ hat if I’ve ever seen one. 😍😍” 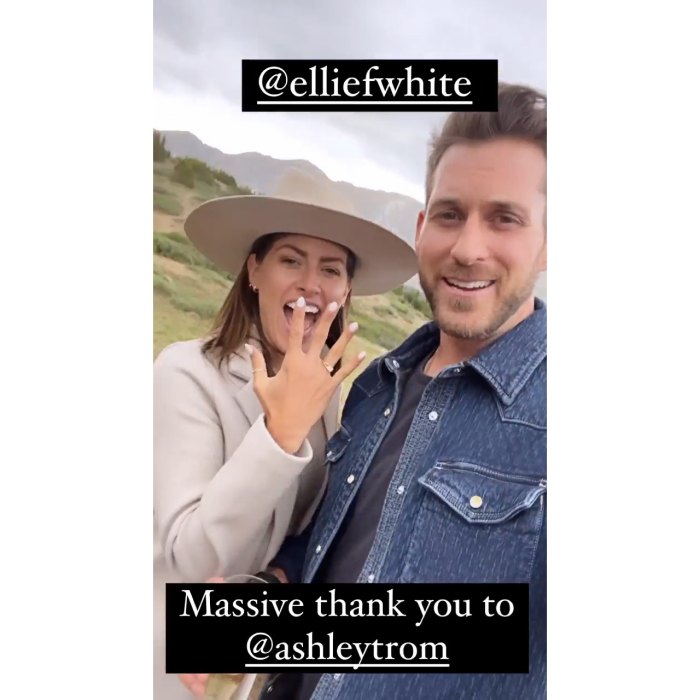 “🙌 Congrats guys see you back in Scottsdale,” Pell, who also appeared on season 12 of The Bachelorette, replied on Saturday.

The Challenge: War of the Worlds alum rose to fame as one of JoJo Fletcher’s suitors during her tenure as the franchise lead in 2016. While McNary came in third behind her eventual husband, Jordan Rodgers, and Robby Hayes, he continued his quest for The One with stints on Ex on the Beach and BiP season 6.

“[I’m looking for] someone that’s adaptable, fun, attractive, understating, not jealous, also beautiful and athletic,” the bar owner previously told Us Weekly in September 2019. “I actually knew early on that messing with Bachelor Nation is kind of a messy pool to play in, so I’ve always kind of been conscious of that. So right now, I don’t know if Bachelor Nation is the [dating] pool I’m pulling from.”

After failing to make lasting on-camera romances, he eventually connected with White before debuting their relationship on Instagram in May 2020.

“I have a secret and I want to share it with you all … Something that this girl right [here] taught me, and she might not even know it,” he gushed via the social media platform that July. “I have finally cracked the code to the best relationship that I’ve ever had … And it’s one five-letter word … TRUST.”

The duo’s romance continued to heat up as they purchased their first joint home late last year.

“Our own little piece of sky! 🔑,” McNary wrote via Instagram in September 2021 of their Phoenix, Arizona, abode. “Can’t wait to rock this new chapter with you and that new hair @elliefwhite. Maybe we’ll paint the house to match those beautiful eyes.”