The teen show will not be renewed for a third season (Picture: Netflix)

Teen series The Baby-Sitters Club has been canceled by Netflix after two seasons.

The reboot of the 90s show, based on the popular children’s books by the same name, follows a group of pre-teen friends who set up and run their own babysitting service.

Now, however, the show is coming to an end and won’t be renewed for a third season, much to the disappointment of a new generation of fans and some nostalgic millenials.

Creator Rachel Shukert said in a statement: ‘I have wanted to be a part of the world Ann M. Martin created since I was 7 years old, and for two amazing seasons I actually got to be.

‘It was a dream come true.

‘Although I am heartbroken not to be returning to Stoneybrook for 20 more seasons, I am so proud of the incredible show our amazing cast and crew created and the way it brought joy and comfort to so many when they needed it most.’

Shukert also tweeted a heart-felt message to the show’s fans, writing: ‘My entire timeline is people who are sad about The Baby-Sitters Club ending and I have to say I don’t hate it. I’m sad too but means more to me that I can say that people loved our show and these girls so much. Love to you all.’

My entire timeline is people who are sad about The Baby-Sitters Club ending and I have to say I donât hate it. Iâm sad too but means more to me than I can that people loved our show and these girls this much. Love to you all. â¤ï¸ 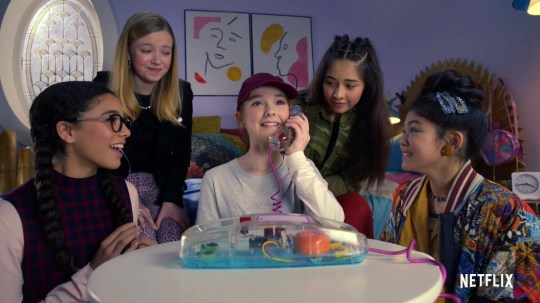 Fans shared their emotional tributes and gratitude to Shukert, with one writing: ‘Thanks so much for a show that was a real pocket of joyful light in dark times.’

Another added: ‘I will always be grateful BSC wasn’t afraid to be an ally to the transgender community. I’ll always be thankful I was a tiny part of something so impactful.’

A third wrote: ‘Lifelong fan of the BSC, Rachel, and I really thought you and the team elevated it beyond anything I could have hoped for. It was a beautiful, tender, funny, humane piece of work and I’m so grateful we got as much as we did. Can’t wait to see what you do next.’

The Baby-Sitters Club is available to watch on Netflix.