US singer Gayle has landed her first UK number one after knocking Adele off the top spot.

Singer-songwriter Gayle thanked fans for ‘being angry with me’ after her breakthrough song knocked Adele off the number one spot in the Official Singles Chart.

The teenage US musician has secured her first hit across the pond with Abcdefu, which had been streamed 4.7million times by Friday.

The rising star, from Dallas, had the biggest digital download of the week, knocking Adele’s Easy On Me – which had spent eight nonconsecutive weeks at the top – into number two.

Gayle, 17, is one of the youngest acts to score a UK number one single and the third under-18 chart-topper in less than two years – following Jawsh 685 and Olivia Rodrigo.

Celebrating the news, she told the Official Charts Company: ‘The thought of my song being number one in the UK is so hard to comprehend but I’m just so excited and grateful.

‘Thank you for being angry with me and, hopefully, we can feel all the emotions with each other again.’

Her single dropped in August last year, but has since enjoyed viral success thanks to TikTok.

Elsewhere in the chart, the cast of Disney’s Encanto climbed to a new peak at number three with We Don’t Talk About Bruno, while Jessica Darrow’s Surface Pressure, also from the film, jumped six places to number eight. 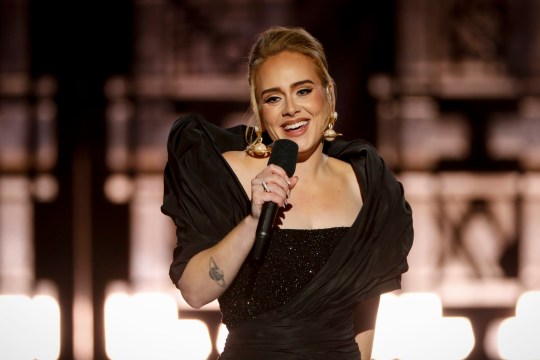 Adele is no longer number one (Picture: CBS)

Following the release of his new album, The Weeknd earned an impressive three singles in the top 40 this week with Sacrifice, Take My Breath, and How Do I Make You Love Me?

The Canadian R&B superstar, 31, also scored his third UK number one album with Dawn FM, joining previous chart toppers Beauty Behind The Madness in 2015 and After Hours, which was first released two years ago.

It is the first album released in 2022 to top the Official Albums Chart and, with no physical version of the album yet, 94% of Dawn FM’s total is powered by streams.

It marks Bowie’s 35th UK Top 10 album and is this week’s biggest seller on physical formats, according to the Official Charts Company.