TEEN Mom Briana DeJesus sobbed and confessed she “can’t stop apologizing” to daughter Stella who cried when she was sent to see her dad, Luis.

The MTV star’s four-year-old daughter does not often see her father, Luis Hernandez, and had a “meltdown” before a planned meeting between the duo on tonight’s episode. 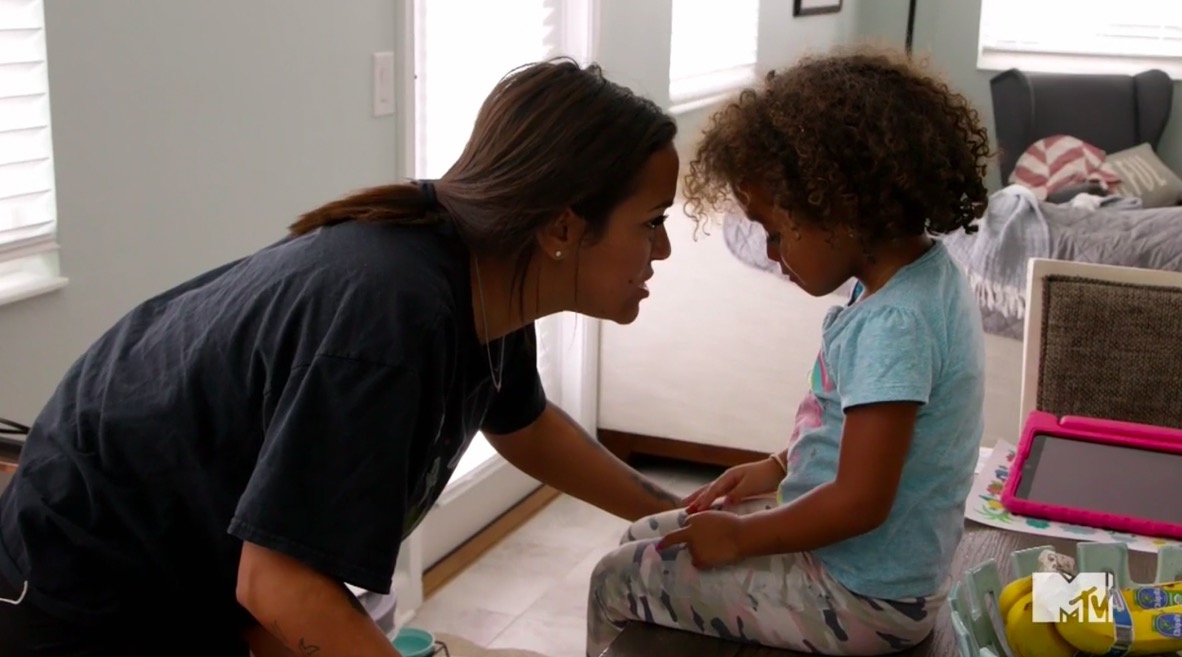 Shortly after the show aired, Briana, 27, went on Instagram Live and completely broke down in tears over her toddler’s intense reaction to the situation.

“I just feel so bad for Stella right now,” she said emotionally before adding: “My glasses are fogging up from crying ugh I need a tissue.”

The reality star then confessed: “It hurts, it does. Good mama’s learn from their mistakes and apologizing and I’ve been apologizing to Stella for the past 30 minutes.

“She’s like ‘what are you talking about’ and I’m just crying and I’m like ‘I’m so sorry!’”

Briana then showed love for her supporters, saying: “Thank you so much guys for all your kind words and thank you for worrying about Stella. Stella is fine.

“Anyway it’s late, I’m going to get out of here. I will be sleeping with Stella tonight.”

On tonight’s episode of Teen Mom, Luis came over to Briana’s house to spend some quality time with their daughter.

Before her dad arrived, Stella began to sob and run away from her mom – even burying herself in their sofa in attempt to hide.

Following the upset reaction, Briana said in a confessional: “Luis is pretty much a stranger to Stella…

“Stella would not be acting like this if Luis came around more. I can’t force her to do anything…

“But I thought it was a good idea that they could spend time with each other.”

She continued: ”I struggle with this daily…whether or not Luis should continue coming in and out or just stay away forever.”

Viewers saw the Teen Mom 2 star clash with her baby’s father on the show as he has been in and out of their daughter Stella’s life since she was born in 2017.

In a previous episode, Briana broke down and fought back tears as she confessed her pain for her youngest daughter.

“I feel so guilty, her not being able to experience both parents,” the Teen Mom confessed.

Stella’s shown for a split-second, hanging out alone on a couch in blue shorts and a frilly, white tank top, looking all around the room.

Just as Luis has been on-and-off in his daughter’s life, he’s also been that way in Bri’s life since Stella’s birth.

She claimed last year that he’s holding a grudge against her for not being with him long term and is taking his resentment out on his daughter.

Earlier in season 10 of Teen Mom 2, she said she contracted an STD from him and admitted she’ll “never forgive” Luis for giving her “the clap” and for “ditching” Stella.

“I cut ties with him and, rather than him continue to come around for his daughter, he decided to take the fact that I wouldn’t be with him after he screwed me over like this out on Stella,” she told Celeb Magazine.

“He’s just pulled his usual ‘gone missing’ card all because his dumb a** gave me an STD, I confronted him about it, and cut him off.

“He stopped coming around to see her completely and he doesn’t even call to check in on her. I’m not innocent here. Obviously, I own the fact that I slept with him.”

She added: “But what sucks more is that he gave Stella (and me) an ounce of hope he could actually be a father figure in her life, only to sweep that away the second I wouldn’t be with him for the long term.”