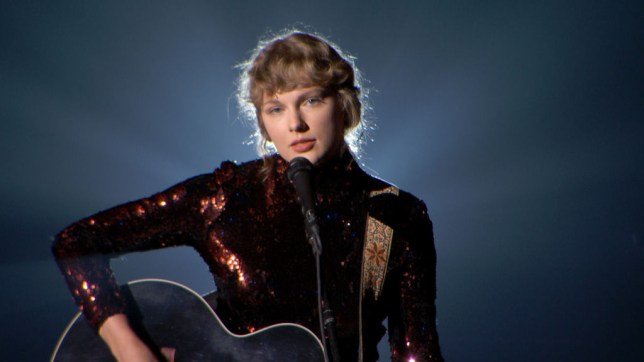 Taylor Swift has dropped the new version of her 2008 album Fearless as she re-records her entire back catalogue.

Fearless is the first of six records that will be re-recorded following the sale of her masters rights by producer Scooter Braun.

The release of the full album comes after she shared the new version of her classic Love Story.

Announcing Fearless (Taylor’s Version) is now ready for fans old and new to hear, the singer, 30, tweeted: ‘It was the night things changed.’

She added a throwback picture of herself from all those years ago, playing guitar on stage.

The album not only includes all tracks from the original and platinum releases, but six previously unreleased songs and a duet with Keith Urban – a nod to when she opened for the rocker on tour during the Fearless era.

He appears on the track That’s When, with the Blank Space singer crediting him as an inspiration to her.

Her fans have previously speculated that the surprise song Mr Perfectly Fine was inspired by her split from ex Joe Jonas, who she had been romantically linked to at the time Fearless came out.

In the song, which Taylor dropped out of nowhere on Wednesday, the Bad Blood hitmaker laments over a former lover who has moved on with a new girl.

Joe’s wife, Game Of Thrones actress, sent the fandom into overdrive when she revealed she was listening to the song, saying on Instagram: ‘It’s not NOT a bop.’

It’s all water under the bridge now, as Taylor was quick to send love back to the TV star as she re-posted the screenshot and added: ‘Forever bending the knee for the (queen) of the north.’

The star has been vocal about the situation surrounding her masters, claiming that they ‘were not for sale to me’.

She described remaking her music as ‘a really amazing, fun adventure’.

‘So far, of the ones I’ve recorded, I think it’s been the most fun doing Love Story because the older music, my voice was so teenaged and I sometimes, when I hear my older music and my older young teenage voice, it makes me feel like I’m a different singer now,’ she told Good Morning America.