Their VIP guest is a familiar figure sitting, legs crossed, in the front row of the audience and gazing up at the stage. 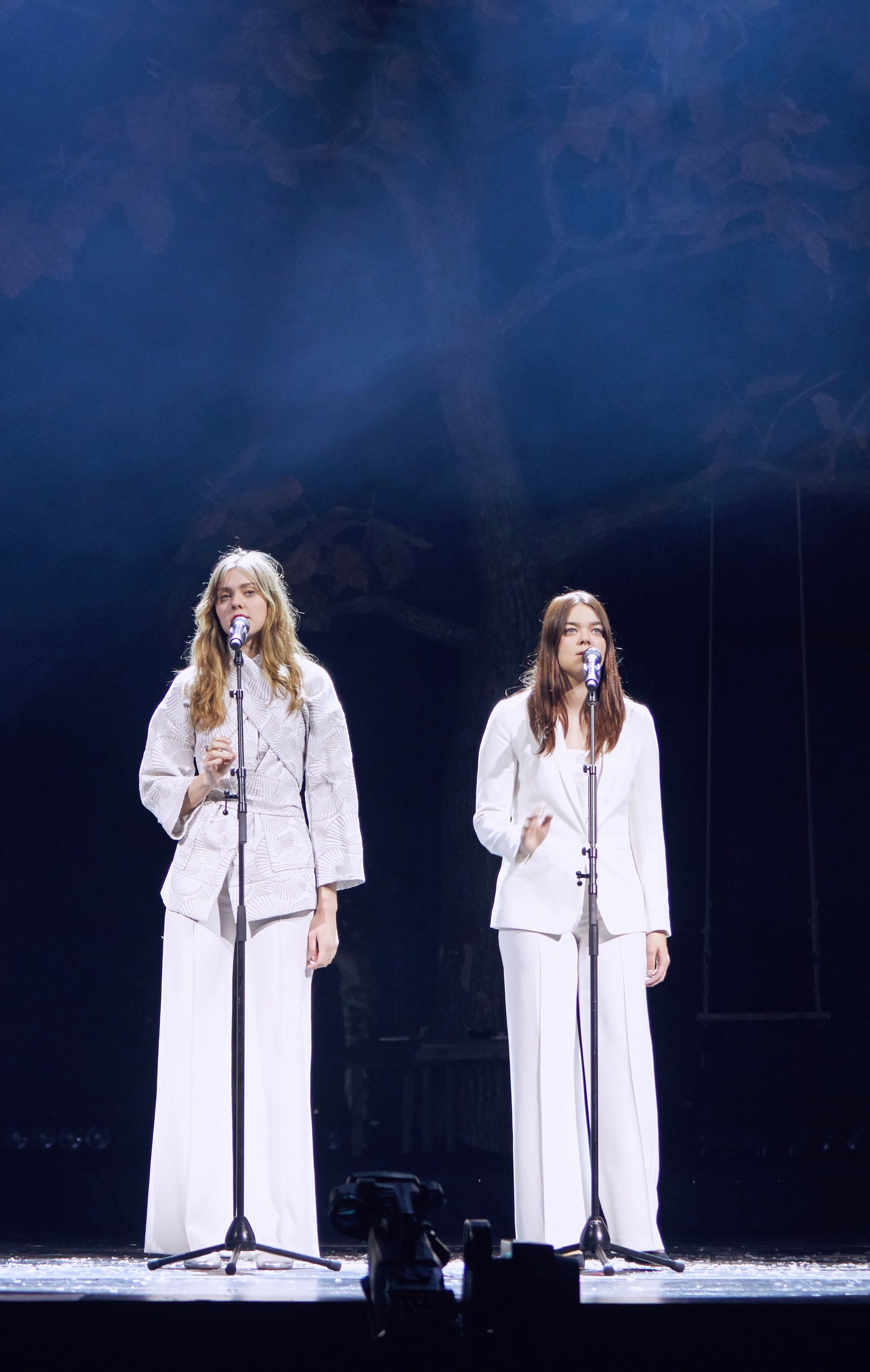 They are Klara and Johanna Söderberg of First Aid Kit and he is Leonard Cohen — except that the Canadian icon isn’t really there and his presence is merely imagined.

The event at Stockholm’s Royal Dramatic Theatre, known locally as Dramaten, happens four months after his death, aged 82, on November 7, 2016.

The show stands as a stirring tribute to Cohen, led by First Aid Kit and featuring prominent Swedish musicians and actors.

Not only does it include many of his timeless songs such as Suzanne, Bird On The Wire and Hallelujah but also readings of his poems and writings.

In her impeccable English, Klara, 28, says: “When we put this show together, we imagined Cohen being in the crowd. 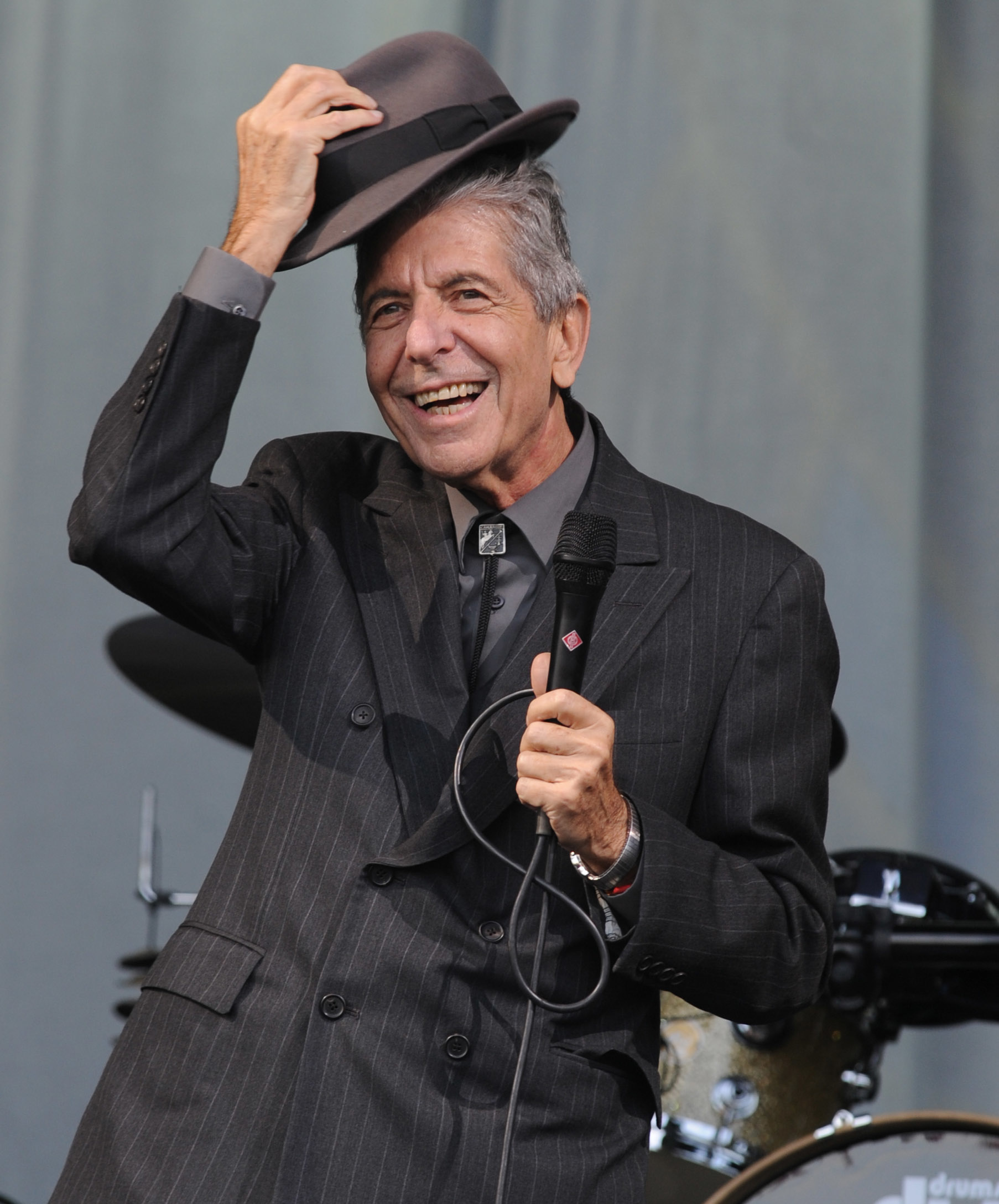 Leonard Cohen was one of the most influential songwriters of his generation who became famous for the classic track HallelujahCredit: Getty – Contributor

“We have so much respect for him and his work that we wanted him there in spirit.”

Johanna, 30, remembers the only time they were actually in the same room as Cohen, at a cavernous arena in Gothenburg.

The year was 2008, near the start of the singer’s glorious Indian summer that also included a mesmerising Pyramid Stage “legend slot” at Glastonbury.

“It wasn’t a very personal occasion but it was quite a spectacle,” she says.

“My favourite moment was when he did Avalanche, just him and a guitar. It was beautiful.

“It sounds silly but our dream was to sing with him one day.”

Klara recalls being “so jealous” of Cohen’s backing singers The Webb Sisters: “I was thinking, ‘How do we get to be those sisters? What do we have to do?’

‘I WAS HEARTBROKEN. I DIDN’T CRY BUT FELT LOST’

“I think that if he had ever heard our music, maybe he would have liked it.”

Johanna grins at her sister and adds: “Those are big words but yeah, I would like to think so too.”

When Cohen was alive, the siblings took comfort from his guiding presence and were devastated when he left us.

Klara admits: “I was heart-broken. I didn’t cry immediately but I felt lost.

“With someone like that, it’s just nice to know they’re around somewhere and still in the world with you. You’re not alone.

“When they pass away, even though you didn’t know them, it’s strange that you react so strongly . . . but that’s how I felt. I thought to myself, ‘I can’t listen to his music yet because, if I hear it, I’m just going to bawl my eyes out’. Then we went to our parents’ house, I stepped in the door and I heard maybe Bird On The Wire and just started crying a lot.” 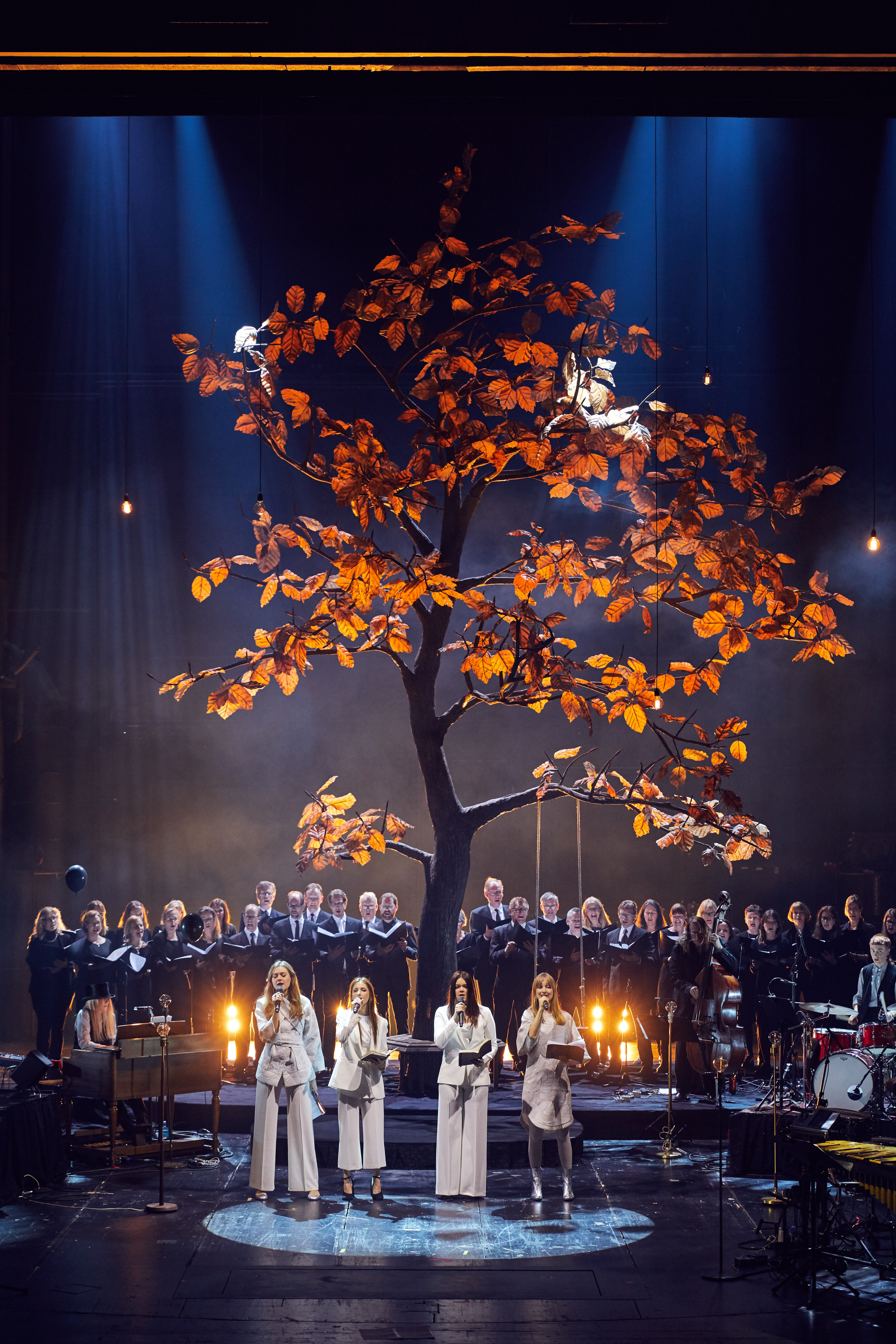 And Johanna says: “It was quite lovely listening through all his records. We really got to say goodbye.” (Perhaps a reference to the Cohen song Hey, That’s No Way To Say Goodbye.)

A few days after his death, the sisters came up with the idea of the tribute concert, which they describe as part of their “grieving process”.

And now, in 2021, a sparkling recording has been made available to the wider world, with the title Who By Fire. To mark its release, I’m speaking to the sisters, via Zoom as is common in these pandemic-hit times.

Like the rest of us, their lives have been upended by Covid-19 restrictions.
But at least it has given them time to appreciate the four memorable nights in 2017 when they saluted their musical hero Leonard Cohen.

They’re at Sony’s office in Stockholm, the wall behind them adorned with a picture of Justin Timberlake and, when Klara moves their computer screen, I can see another of Bruce Springsteen.

First Aid Kit record for Sony’s legendary Columbia label, home to the towering back catalogues of The Boss, Bob Dylan and Cohen.

‘A PICTURE OF BRUCE WATCHING OVER US’

“So we have a picture of Bruce watching over us,” says Klara, who’s sporting a new blonde look. “There’s no Dylan or Cohen, though. We’ll have to talk to the Sony office here in Sweden to sort that out.”

She proudly holds up the double LP version of Who By Fire, pulls out one of the records and points at the label with pride.

“One of the cool things about this record, which of course we have handy, is that we have the classic (walking eye) Columbia logo on it,” she says.

With their intuitive harmonies and keen sense of melody, First Aid Kit are marked out by their authentic appreciation of the folk and country music coming out of North America since the Sixties.

As teenagers “when we were falling in love with music”, the sisters discovered their parents’ copy of Cohen’s 1975 “best of” collection and it became their gateway to his “songs of love and hate”.

Klara says: “We heard Suzanne and it was a done deal. That sealed it.” 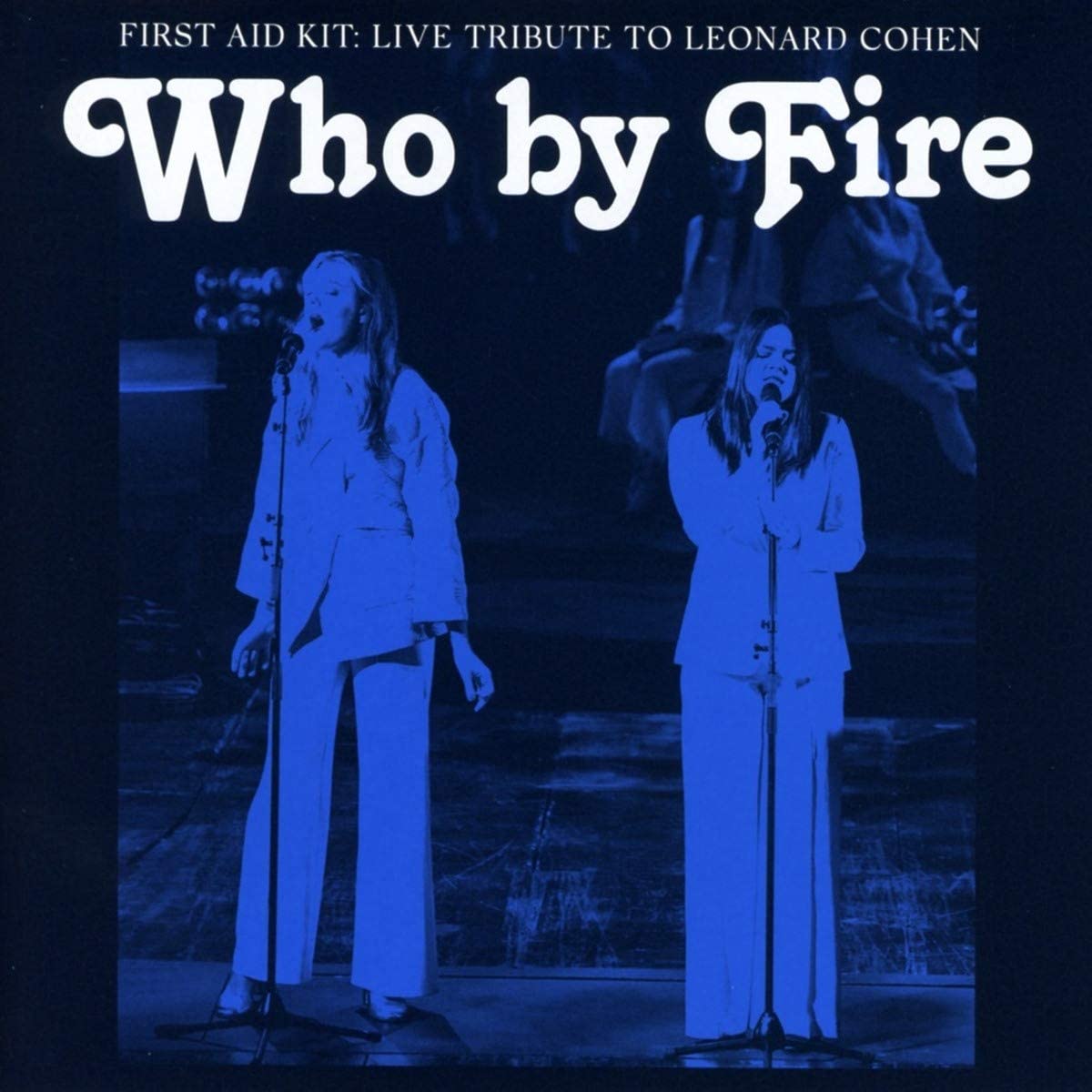 She believes Cohen’s early recordings, “mostly him on guitar and very sparse”, show how powerful are his thoughts on the human condition.

“They don’t need embellish-ments to shine. His lyrics are so strong and so beautiful. They feel effortless, although they weren’t — quite the opposite.

“There’s not one line in a Leonard Cohen song where you go, ‘That one didn’t really work out’.”

Later, Bright Eyes singer Conor Oberst, another of their great inspirations, also helped turn the sisters on to Cohen.

“And now a lot of young women listen to us,” says Johanna. “And I hope they find him through us. We see ourselves as keepers of a certain songwriting tradition.”

She remembers an old YouTube clip of Klara before they became First Aid Kit, singing her heart out on Hallelujah, Cohen’s momentous and much-covered anthem.

‘BEING IN COHEN’S WORLD WAS MAGICAL’

For the tribute concert version, however, the sisters handed the lead vocal duties over to singer and writer Annika Norlin.

“We decided to put that pressure on someone else,” says Johanna. “I like her vocals, they are very understated. We didn’t go for an X Factor version!

“We wanted to bring in a broad variety of voices. Our friend Maia sings Famous Blue Raincoat in a very high-pitched voice, like a chipmunk. That is how she describes it herself!”

Klara laughs and cuts in: “Kate Bush is what I would say. Chipmunk Kate Bush, yep.”

On a more general note, she says: “It was such a magical evening being in the world of Leonard Cohen. I didn’t think about myself at all. I was just feeling his words.”

The show includes an emotional reading of Leonard’s Letter To Marianne, written to his lifelong muse as she lay on her deathbed in her native Norway, not long before the singer himself died. 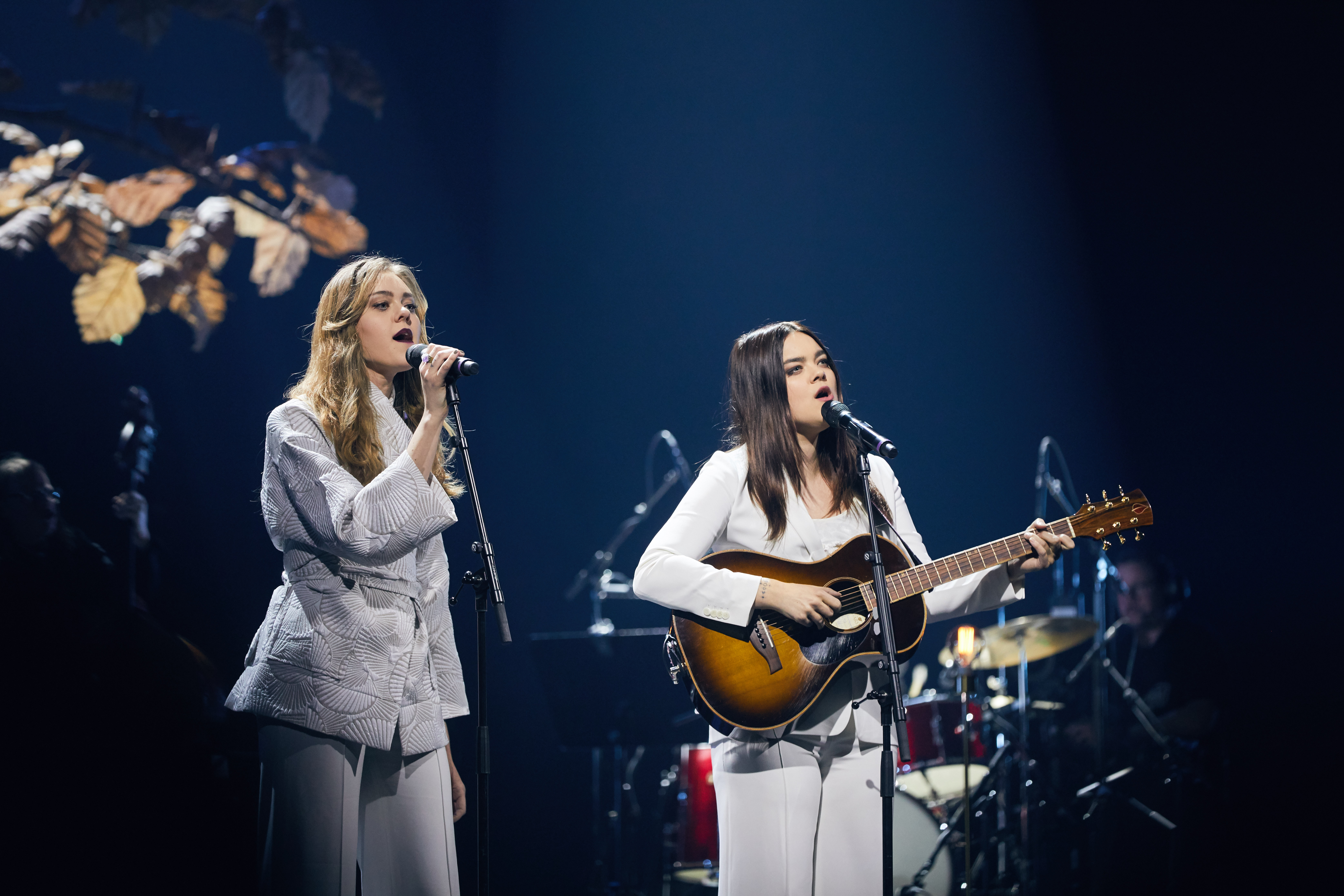 It goes: “Well, Marianne, it’s come to this time when we are really so old and our bodies are falling apart and I think I will follow you very soon. Know that I am so close behind you that if you stretch out your hand, I think you can reach mine.”

These touching words set the scene for an epic ensemble performance of So Long, Marianne which even includes a rare verse only performed once live by Cohen, fittingly in Oslo with the subject present.

It’s strange to think that the ravishing Who By Fire album might not have appeared but for the strangest of years, when First Aid Kit’s regular cycle of album, tour, album, tour was broken.

“We spent 13 years touring our asses off!” says Klara, explaining disruption to their regular routine had already been enforced due to her “burnout” after taking their 2018 album Ruins on the road.

“We had to cancel a whole summer of festival shows. It was one of the hardest decisions but it was made for me, by me and my body, because I couldn’t get out of bed.

“I thought, ‘If I can’t get out of bed, I can’t get on a stage for 10,000 people’.”
So Klara has been spending time recharging her batteries and admits: “It’s been really good for me but, at the same time, I really miss seeing people, travelling and culture.” 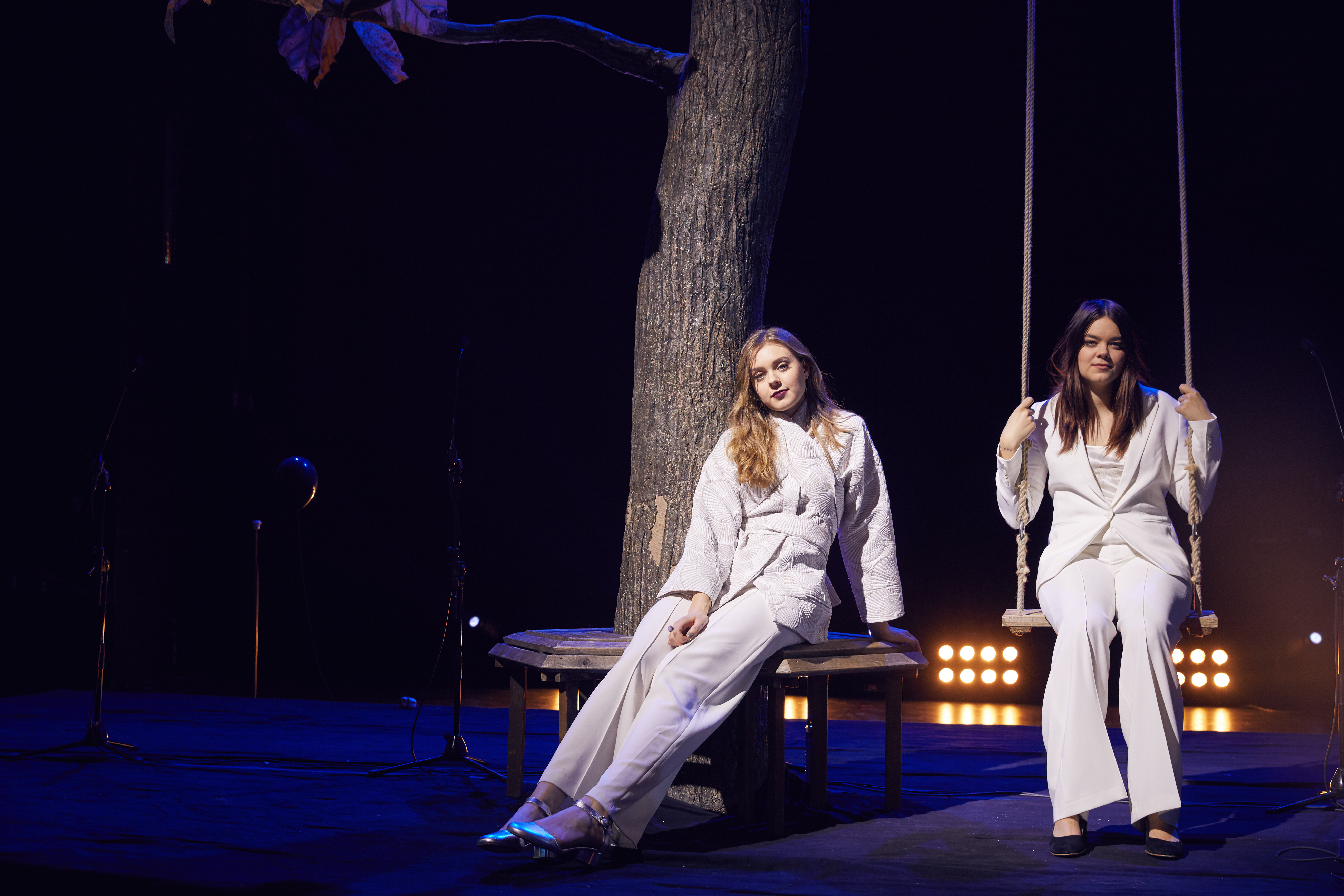 Thoughts are turning towards the band’s next studio album

Meanwhile, Johanna has just become a mum and sees the hiatus as an opportunity to recalibrate her life.

She says: “For our sanity’s sake, this time has been good and, with the baby, I think it will be different in the future. I won’t be able to tour as much. At times, it’s been crazy. We’ve flown to Japan, been there for eight hours just to do interviews, and then gone home again. I don’t think that’s a sustainable lifestyle for the environment or for our health.”

With thoughts turning towards their next studio album, Klara says: “We’re not rushing it this time.

“I don’t regret anything because I’m really proud of the music we’ve put out, but we didn’t have a lot of time to make those records. We weren’t taking it easy at home very much, which we needed. Now it’s a different kind of life and we were ready for it, even before the pandemic hit.”

With Sweden being in the news for having fewer restrictions than other countries, Johanna says their father, Benkt, who encouraged their career and played on First Aid Kit’s first three albums, has been in hospital with Covid.

“He got pretty sick so that was a bit scary,” she says. “It’s been pretty loose here and it’s going slow here with vaccines but hopefully we’ll get to play live again soon. 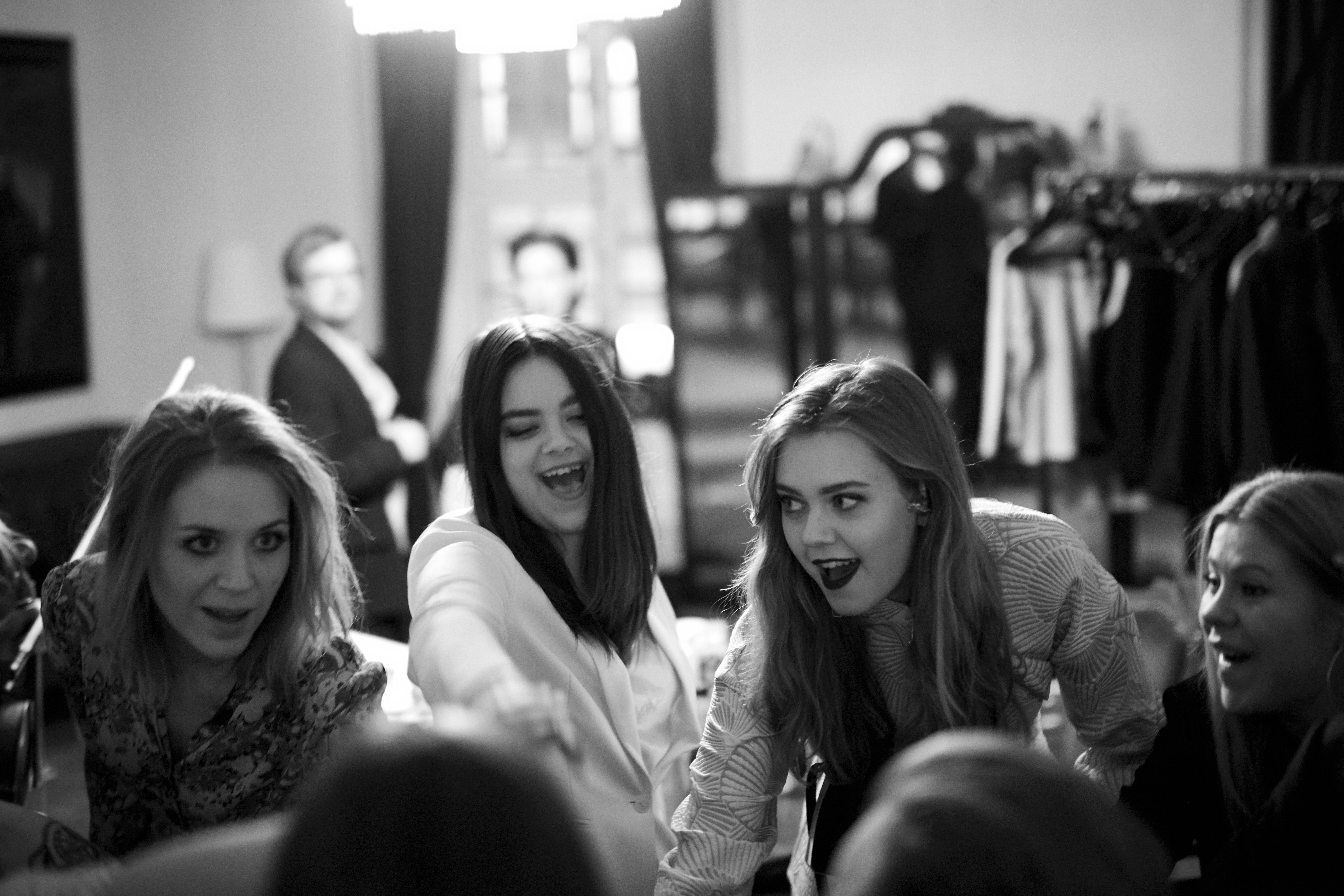 The girls are excited to return to playing music live

“I feel like I’ll have a heart attack if we play a festival. I can barely take in just walking down the street, seeing people.”

And the final word is with Klara: “Our last show was in February, 2019. Right now, imagining standing on a stage and playing for people is mind-boggling.”

For the time being, we’ll have to make do with the Who By Fire album — and the night First Aid Kit would have made the great Leonard Cohen very proud.