Susanna Reid admitted on Good Morning Britain that her heart had begun to ‘race’ after hearing an air raid siren going off live in Ukraine during an interview.

During Wednesday morning’s programme on ITV, Susanna and Richard Madeley spoke to CNN’s international correspondent Clarissa Ward, who was reporting from the capital, Kyiv on Russia’s continued attacks on the country.

As Clarissa spoke to the camera, an air raid siren could be heard in the background, as she explained that people nearby had become ‘accustomed’ to the blaring sound.

‘There you have it, the air raid sirens are starting up again. This is a sound that by now all of us have become all too accustomed to,’ she said.

‘It is sort of the soundtrack of daily life here in Kyiv.’

Explaining to the GMB co-hosts that the violence between Russian and Ukraine forces is currently ‘primarily’ in suburban areas, people situated in the city centre are fearful of Russian troops ‘encircling’ the Kyiv.

Clarissa said that the sound of air raid sirens had become the ‘soundtrack of daily life’ (Picture: ITV)

As they signed off from the interview, Richard expressed his hope that Clarissa stays safe in the region.

‘Thank you so much for joining us and we say this to all our correspondents out there, do stay safe. Look after yourself,’ he said, as the correspondent shared her thanks. 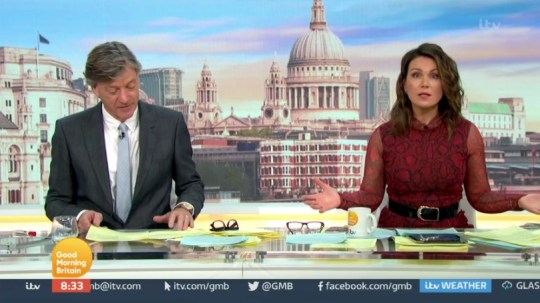 As they returned to the ITV studio, Susanna confessed that the noise emitted by the air raid siren had a significant effect on her.

‘Clarissa, the embodiment of calm, as an air raid siren sounds behind her in a besieged city. My heart starts to race as soon as I hear that,’ she said.

Several viewers praised Clarissa on maintaining her composure as the siren went off, with one tweeting: ‘The American reporter, amazing. Totally kept her cool during the air raid siren.’

‘I jumped out my skin when it went off. She was just like “Oh here we go again”. Amazing woman!’ someone else remarked.

On Tuesday, the Ukrainian government claimed that Russia broke a third ceasefire by attacking families trying to flee the war.