While Susanna Reid and Kate Garraway were living it up at the star-studded Tric Awards yesterday, they’ve revealed they both suffered extremely relatable wardrobe malfunctions at the lavish affair.

However, the event wasn’t all smooth-sailing, as Susanna revealed during speech on stage that she was holding her dress together because a button had popped off.

On Thursday’s GMB, she opened up about the mishap, with Kate revealing she also experienced a sartorial gaffe of her own.

Referencing the white sequinned dress worn by her colleague Charlotte Hawkins, she said: ‘I’m not going to speak for you, but I can’t pull off a dress like Charlotte, but the dress tried to take itself off of me.’

After Ben Shephard joked that her and Kate’s outfits for the event weren’t ‘bad’, Kate revealed how her and Susanna’s wardrobe malfunctions went down.

Susanna and Kate beamed as they posed together at the awards ceremony (Picture: Ian West/PA Wire)

‘Susanna was about to go on stage. The button came off as she was about to make a speech when we win, and the back of my trousers split wide open,’ she said.

Ben guffawed with laughter, as Kate revealed that the wardrobe team were apparently trying to ‘rectify’ the situation with her hot pink ensemble, as well as order flowers for the designer as an apology.

‘Was it actually for you or was it for someone else?’ Ben questioned. 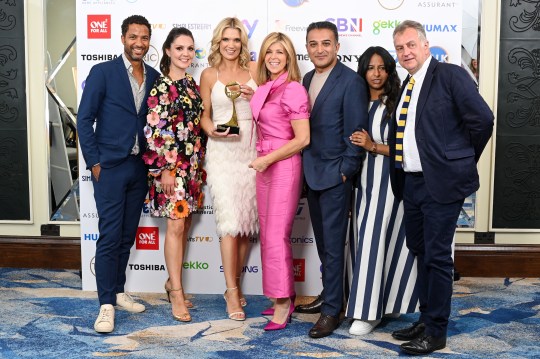 While speaking at the Tric Awards, Kate told reporters that her husband Derek Draper, who was discharged from hospital in April last year after contracting Covid in March 2020, was back in hospital.

‘He’s ok, he’s back in hospital actually, so that’s a development. There we are,’ she said.

The family have documented Derek’s journey amid his health struggles in two documentaries, Finding Derek and Caring For Derek.