Suggs revealed on The One Show on Monday that a Madness concert once caused two earthquakes, which forced residents to be evacuated.

In a music career that spans 40 years, Suggs came to prominence in the late 1970s as the lead singer of the ska band.

They released fifteen singles that entered the Top 10 charts in the United Kingdom, including My Girl, Baggy Trousers and It Must Be Love.

It was host Ryan Clarke Neal who brought up the surprising story tonight, revealing the earthquakes happened back in 1992.

‘If anyone has ever doubted the loyalty of Madness fans, I just want to revisit this. This is the annual report from the British Geological Survey back in 1992 and it states that on two different occasions there were reports of earthquakes in North East London,’ the TV presenter revealed.

‘Now looking at these reports, it included cracked balconies, cracked windows and even residents evacuated from three tower blocks. 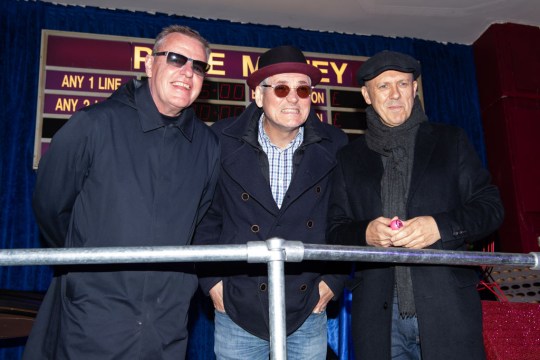 ‘It also adds that both of these times there was a Madness pop concert in the nearby Finsbury Park area of London. Suggs, what are you giving earthquakes to London for back in 1992?’

Suggs explained to Ryan and co-host Alex Jones that it was an impromptu concert that his friend had suggested.

‘Well it was bizarre. We hadn’t played for about six years; we had taken a few years out I think we had gone to live in Holland. A guy called Vince Power used to do an Irish festival and he said “Look, I can keep the staging up if you want to have a bit of a reunion”.

‘Anyway, 35,000 people turned up and when we started One Step Beyond they started jumping up and down in unison. And as it said there they had to evacuate flats.

‘Then it happened the exact same time the following night [when we played]. So yeah, Madness caused an earthquake, which is something to go on the CV.’

The trio couldn’t help but laugh at the surprising story.

The One Show airs weeknights from 7pm on BBC One.