Strictly Come Dancing’s John Whaite has revealed he tucked a ‘lucky penny’ in his ‘knickers’ for good luck for his routine on Saturday night – and will continue to do so for the rest of the series.

The former Great British Bake Off winner safely sailed through to Movies Week in this evening’s result show, with EastEnders star Nina Wadia becoming the first celebrity to be eliminated from the competition.

John shared his somewhat unusual charm with viewers as he spoke to Claudia Winkleman alongside his partner Johannes Radebe.

‘So, I plucked it up and put it in my knickers and it’s safely tucked in there now!’

A curious Claudia then asked whether the penny will stay put, to which Jon replied: ‘Every single week it’s gonna be there, nestled.’ 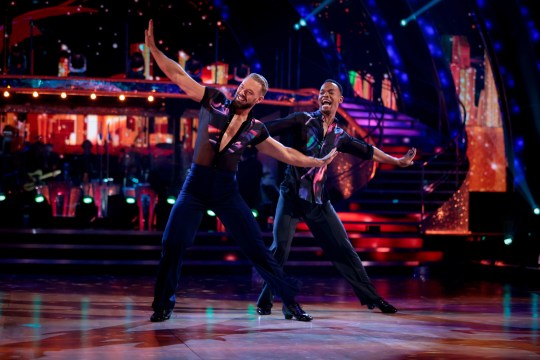 John and Johannes made it through to the next round (Picture: BBC)

‘We are all just delighted collectively that you wear knickers!’ Claudia laughed, as Johannes cracked up.

Elsewhere, Johannes expressed his gratitude at having John as a partner.

‘Claudia, I can’t tell you how grateful I am for this discipline,’ he beamed. ‘That’s why I love him and that’s why he’s the best for me.’

Sunday’s results show also featured a group performance from the professional dancers to Tom Grennan singing his track Something Better.

Singer-songwriter Griff also performed her new single One Night to a professional routine.

Next week the remaining 14 couples will perform movie-themed routines.

Strictly Come Dancing continues on Saturday at 6.45pm on BBC One.