Strictly Come Dancing 2021’s Ugo Monye admitted that while his girls are loving seeing him perform on the BBC show, his young daughter Phoenix is also a massive fan of fellow contestant, AJ Odudu.

Aside from wanting to win over the judges, his young girls are also his biggest critics and understandably thrilled to have their dad dancing on telly.

But Ugo admitted he has competition from elsewhere when it comes to being his daughters’ number one on the show, with his eldest daughter Phoenix becoming particularly attached to AJ Odudu, who has taken the dance floor by storm already.

He exclusively told Metro.co.uk: ‘Phoenix loves AJ! I know it’s been said a lot, but representation is so important on telly and I’m not taking anything away from AJ – AJ is a phenomenal dancer, she’s just been remarkable.’

Ugo continued: ‘For Phoenix to see an elegant brown skinned girl on TV, full of life and joy. I’m sure she… perhaps, whether it’s something intrinsically built in you, but she automatically warms to AJ. 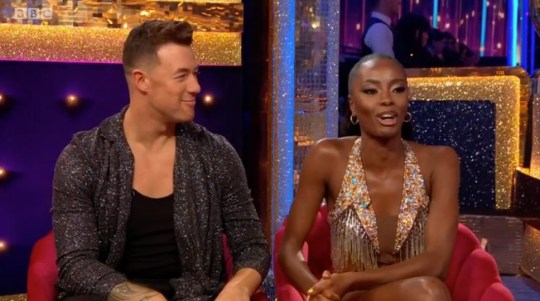 AJ has been one of the stand-out’s so far this year (Picture: BBC)

‘But that’s not just because of our skin tone, there’s not many people in the world that will automatically warm to AJ because she is amazing.’

He went on to joke: ‘I was going to say, it’s a secret but it’s not even a secret, she loves AJ!’

This year’s show has undoubtedly gone a long way in terms of representing a wider group of people, with Rose Ayling-Ellis becoming the series’ first-ever deaf contestant as well as John Whaite featuring in the first all-male competing couple alongside Johannes Radebe.

Ugo added: ‘I mean, I quite like the fact [Strictly’s representation] hasn’t been spoken about… I like people, number one and I like meeting people who I’ve never met before.

‘I am fascinated by how Rose prepares herself to dance, I think she said a few weeks ago, that deaf people can still feel the music, they still have a great sense of the music.

‘I guess if you were to speak to all 15 dance pairings on the show, Oti’s methods will be very different to Giovanni’s, to Graziano’s.’

Ugo continued to praise his fellow contestant, commenting: ‘Rose, as an individual, I’m amazed by what she’s doing in terms of performance – it’s incredible and who she’s representing is amazing as well.

‘She showed a real different side to her but they key thing is, that by her being herself, she is doing so much more than just dancing and I love that!’

Ugo made huge progress from week one to week two, with Craig Revel Horwood noting he’d worked ‘really hard’ with partner Oti Mabuse on his Quickstep.

Tonight, the pair will come out all guns blazing to a wigs-and-all routine based on one Ugo’s daughters’ favourite films, Moana, hoping to impress the panel once more.

Strictly Come Dancing continues tonight at 6.45pm on BBC One.