Last weekend saw Tilly in the bottom two with Olympian Adam Peaty, after the pair both struggled slightly on Saturday night.

However, after a very close dance-off, it was Tilly who was saved by three out of the four judges, with head judge Shirley Ballas telling viewers she would have kept Adam instead.

When asked who he wanted to keep for another week, Anton noted both couples were ‘equal in measure’ and he was ‘desperate for something to happen to make me choose.’

He subsequently revealed there was ‘a moment’ in Tilly and Nikita Kuzmin’s dance which swayed him and, on Tuesday’s It Takes Two, he told presenter Rylan Clark-Neal exactly what that was.

Anton said: ‘There was a moment in it, where she went into promenade and she did these lovely little fans in steps,’ before he got out his seat to demonstrate.

Tilly was in the dance-off against Adam on Sunday night (Picture: PA/Guy Levy/BBC)

The judge took Rylan through the steps, saying: ‘I’ll do it as Tilly. She came through in promenade which is this open position here

‘She stepped through here and she did this little thing, this fan swivel with the foot and then moved on.

‘She did about three of those in a row but she came from something and hit this promenade position and it was so clean and so strong and she whizzed through this next variation in such a positive way. 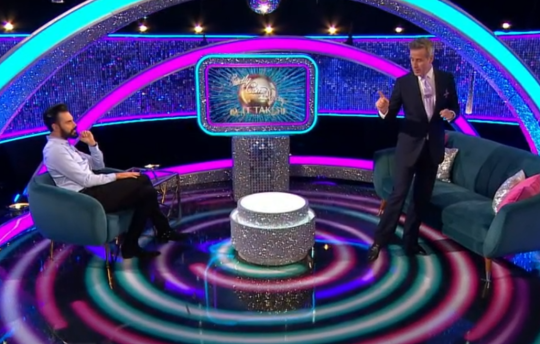 Anton demonstrated Tilly’s promenade steps from her routine to Rylan on It Takes Two (Picture: BBC)

‘I was so impressed with that, it was literally that [moment] which made me go, “That’s it for me.”’

Rylan went on to ask the judge whether he believed the eight remaining contestants were on an equal playing field, to which Anton agreed.

He said: ‘I absolutely do, I don’t like to use examples of people but Sara is a great example, the week before last she was at the bottom, this week she’s back near the top.

‘Rhys [Stephenson] was in the dance off a couple of weeks ago, it’s really like this!’

It seems this year could truly be anyone’s game, with three of the remaining eight contestants joint at the top of the bookmakers’ odds to take the coveted Glitterball Trophy home.

Rose Ayling-Ellis and Giovanni Pernice, AJ Odudu and Kai Widdrington and John Whaite and Johannes Radebe are all currently tied in poll position as favourites to win.

But which couple will ultimate end up walking away with the title in December?

It Takes Two airs weekdays from 6.30pm on BBC Two.