Strictly star AJ Odudu was heard apologising to her professional partner Kai Widdrington in a very cute way after slipping on her dress during her latest performance.

AJ and Kai have gone through quite the journey during this year’s Strictly, finding themselves top of the leader board with their cheeky Charleston, but tumbled to the bottom last Saturday.

Despite working hard all week on her ‘power Paso Doble,’ the 33-year-old failed to impress the judges, scoring 28 points.

A new ‘secret mics’ clip from the show featured a snippet of the end of their routine, with the presenter saying sorry to her dance partner and calling him ‘baby’ – amid speculation the pair are dating.

Whilst Kai seemed pleased with their performance, saying ‘well done’ to AJ, she responded ‘sorry baby,’ after suffering a slight mishap.

The pair found themselves trailing at the bottom of the leaderboard (Picture: BBC)

The judges didn’t have the most complimentary feedback for the TV star, with Anton Du Beke appearing to pick up on her dress issue.

He said: ‘You get a little bit – dare I use the word – stiff. And you had a moment there where you sort of slipped.

‘You recovered unbelievably well, you ploughed on but it made you go a little bit stiff so your arms are almost rejecting your partner.’

Sharing a clip of the routine on her social media channels, she said: ‘Gutted about the cheeky little slip on my dress during our power Paso tonight but I tried my best & we kept going. Olé!’

Ore Oduba, who took home the BBC crown in 2016, said: ‘Totally thought it was choreo!! Was amazing babe.’ 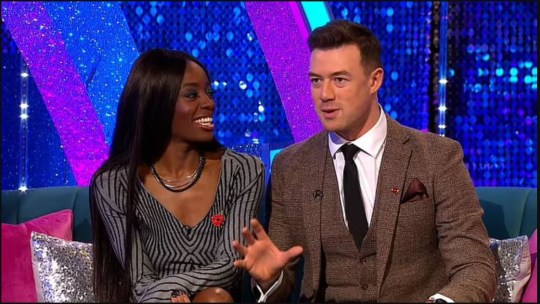 Her romantic apology to Kai comes amid continued speculation the pair are a partnership away from the cameras too.

AJ told It Takes Two host Janette Manrara ‘nothing will top’ meeting Kai for the first time when asked about her highlight from the show so far.

She said: ‘Oh my gosh, all of it. But I think nothing will ever top meeting Kai for the first time, us just getting on like a house on fire.

‘And coming out on the Strictly ballroom, doing the Jive and I was so shocked with everyone’s positive comments like there’s no feeling like it. It was amazing.’

Strictly Come Dancing continues on Saturday at 6.35pm on BBC One.