Strictly Come Dancing’s AJ Odudu has addressed her awkward lift mishap during Saturday’s routine and stressed she’s glad to have the opportunity to redeem herself.

The TV presenter landed in the dance-off with her professional partner Kai Widdrington after their salsa to Gloria Estefan’s Rhythm Is Gonna Get You placed them at the bottom of the leaderboard.

The couple secured a place in the semi-final after they performed the number again, however, it was BBC Breakfast presenter Dan Walker and his partner Nadiya Bychkova who were eliminated by the judges.

Speaking to Rylan Clark-Neal on Strictly spin-off show It Takes Two, AJ admitted: ‘At the beginning, I felt like a pop star. When I was at the top of those stairs in that beautiful dress, I felt like Jennifer Lopez.

‘And I got down the stairs, jumped over Kai, looked into his eyes and I was like, right we’re in, let’s salsa our socks off. And then it just slowly went downhill a little bit. I got tangled up.’

She said she and Kai had ‘never once played it safe’ and every week she has pushed herself outside her comfort zone.

‘I know that was a tough routine because it was challenging for Kai as well,’ she continued. ‘That’s when you know, when the pro finds it hard.

‘But genuinely, I would much rather stumble going for it than just have an easy ride.’

Kai agreed, adding: ‘I’d rather it go wrong and do that than play it safe. So I think it’s good that we push the boundaries with each other.’ 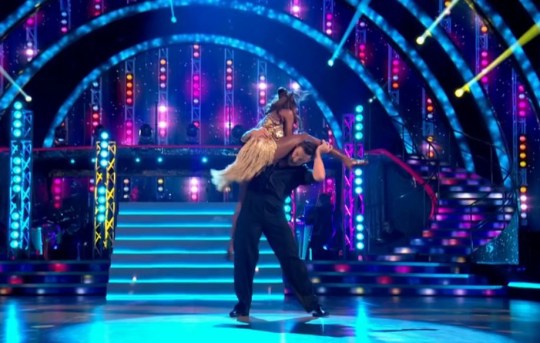 AJ’s legs got tangled as she attempted to do a lift (Picture: BBC)

The couple explained that they had missed a step before the lift and this had caused the stumble, which saw AJ’s legs get tangled around Kai’s shoulders.

‘I realised if I tried to put her down she would have hit her head, so I thought, I’m just gonna wait for her to climb off my shoulder, and then I will usher her back to her end position,’ Kai said. 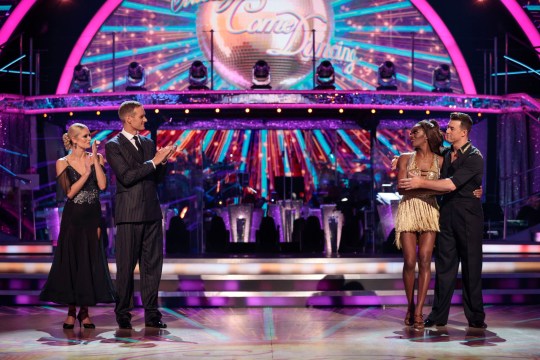 Dan Walker was sent home by the judges after the dance-off (Picture: PA)

The couple will perform a quickstep to Sing, Sing, Sing by Benny Goodman, as well as a rumba to Show Me Heaven by Maria McKee, a Latin number that Odudu has struggled with over the competition.

However, the TV presenter stressed: ‘I’m not worried because genuinely being so close to leaving at the weekend has just made me realise how much fun I’m having.

‘This whole experience is so magical. I don’t want to be scared of a single dance. I’m seeing it as an absolute massive opportunity to redeem myself and show that I can do Latin dances as well.’

It Takes Two airs weeknights at 6.30pm on BBC Two.