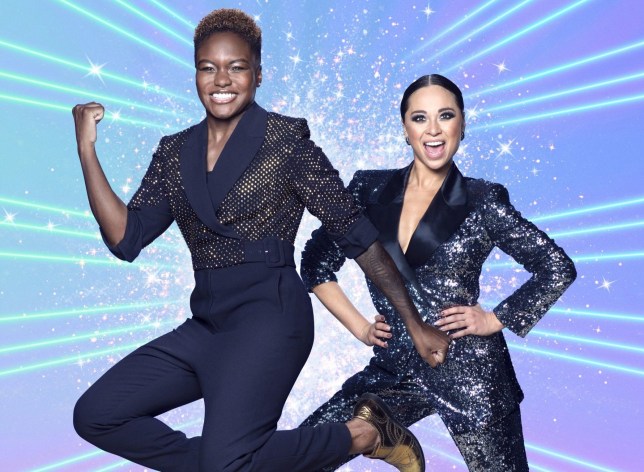 Nicola Adams and Katya Jones are set to make their Strictly Come Dancing debut on Saturday night, and it looks like they have been preparing pretty hard.

The boxer and professional dancer – who are making history as the first same-sex pairing on the BBC show – will be performing a quickstep to Get Happy by Ella Fitzgerald.

And, taking to Twitter, the athlete, 37, gave us a glimpse into their final rehearsal.

In a video, they could be seen preparing for their first walk out, as well as their final bow.

Game faces on 😅 me and @Mrs_katjones have been working really hard on the dance this week, we can’t wait for you all to see it tomorrow 🙌🏾 team #𝗼𝘂𝘁𝘀𝗶𝗱𝗲𝘁𝗵𝗲𝗯𝗼𝘅 👯‍♀️ pic.twitter.com/JHyvEywNO4

‘This is just some awesome stuff,’ her partner agreed.

Alongside the clip, the Olympic gold medal winner penned: ‘Game faces on.

‘Me and @Mrs_katjones have been working really hard on the dance this week, we can’t wait for you all to see it tomorrow.

Well we can’t wait to see what Team #OutsideTheBox pull off.

Nicola has thrown herself right into the swing of things, taking on gruelling 12-hour training sessions in her bid to get her hands on the Glitterball trophy.

However, her girlfriend Ella Baig revealed this has thrown a spanner in the works in the bedroom.

When asked about how training has impacted their sex life, she reportedly told the Sun: ‘We’re too tired!

‘We’re just watching a lot of Netflix and taking advantage of Deliveroo.

‘Where we live in Leeds we can’t get it. So to be able to have it here and order it whenever we like is great.

‘Nicola is putting in such gruelling hours. She’s exhausted by the time she comes home.’

To be fair, a Deliveroo does sound like a great night in.

Strictly Come Dancing continues on Saturday, at 7.25pm, on BBC One.