The premiere features a warning in the US (Picture: Courtesy of Netflix)

A warning has been added to the first episode of Stranger Things season 4 following the tragic shooting at a school in Uvalde, Texas where 21 people were killed.

The release date for the new episodes of the Netflix sci-fi series arrives today, reuniting fans with members of the cast including Millie Bobby Brown, David Harbour and Winona Ryder after three years.

While viewers across the globe are excited to find out about what adventures the gang will embark on, some could find the opening scene of the premiere ‘distressing’, which is why a warning has been added to the first episode for audiences in the US.

According to Variety, a warning card has been added to the first episode for Netflix users in the US which reads: ‘We filmed this season of Stranger Things a year ago. But given the recent tragic shooting at a school in Texas, viewers may find the opening scene of episode 1 distressing.

‘We are deeply saddened by this unspeakable violence, and our hearts go out to every family mourning a loved one.’

The description for the premiere has also been edited so that it says: ‘Warning: Contains graphic violence involving children’, with ‘disturbing images’ added to the show rating advisories, the publication stated.

The first few minutes of the premiere shows a horrifying flashback to Eleven’s (Millie Bobby Brown) past at Hawkins Laboratory (warning – spoilers ahead).

The opening scene shows a look back at Eleven’s past (Picture: Courtesy of Netflix)

In the opening scene, fellow superpowered children are shown murdered at the lab.

Dr Martin Brenner (Matthew Modine), referred to by Eleven as ‘Papa’, finds her covered in blood, implying that she was the cause of the kids’ deaths.

The school shooting in Texas resulted in the deaths of 19 students aged between seven and 10 and two teachers. 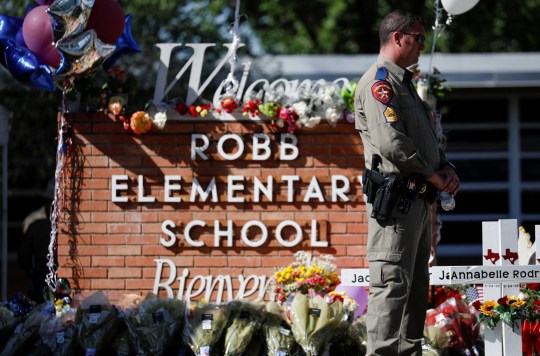 A Texas Department of Public Safety officer stands in front of a memorial to the victims of the shooting outside Robb Elementary School (Picture: Reuters/Marco Bello)

The gunman, who was identified as 18-year-old Salvador Ramos, was killed, Texas Governor Greg Abbott said. He was reportedly a student or former student at Uvalde High School.

Taylor Swift, Kourtney Kardashian and Piers Morgan were among those who spoke out urging for stricter gun laws in the US, with the Blank Space singer writing: ‘Filled with rage and grief, and so broken by the murders in Uvalde.

‘By Buffalo, Laguna Woods and so many others. By the ways in which we, as a nation, have become conditioned to unfathomable and unbearable heartbreak.’

‘Nothing was done after Sandy Hook to stop another school massacre like that happening again. It’s now happened again. Schoolchildren being slaughtered in their classrooms should not be a political issue,’ wrote Piers.

Stranger Things season 4 volume 1 is available to watch on Netflix from today, with volume 2 coming out on July 1.