Stranger Things season 4 volume 2 has dropped on Netflix, and after Kate Bush’s success from volume 1, the soundtrack for part 2 is sure to be popular.

Kate continued her extraordinary resurgence since the release of Stranger Things season four part one, reigning supreme in her number one spot for consecutive weeks with her 1985 song Running Up That Hill.

For some, the 80s hits are as key to the show as the nostalgic outfits, and Kate’s success with her iconic song only goes to prove it.

The first set of songs, which included Kate’s iconic Running Up That Hill, premiered digitally on Friday, May 27, and the complete soundtrack album, including those six tracks from the final episode of season four, are now live too.

When Journey’s legendary vocalist/songwriter/frontman Steve Perry first heard the remix of his band’s smash hit from 1983, he said: ‘I was stunned at how cool it was. I found out that Bryce Miller and Troy MacCubbin had created it and told them how much I loved it.

‘One week later, I had an idea for an extended version, so I called Bryce and we assembled our Extended Remix.

‘Being a huge fan of the show, having my music on the soundtrack made me very happy! I truly love both these remixed versions as much as I do the original recording from the Journey Frontiers record.’

The new Steve Perry and Bryce Miller extended remix of the song adds an epic bookend power-close for the album.

Where would the drama be without the music? (Picture: Netflix)

Between the two Separate Ways (Worlds Apart) remixes, Stranger Things: Soundtrack from the Netflix Series, Season 4 travels across the action-packed supernatural real world and Upside Down through music that follows the emotional storylines of our beloved characters.

From the sound of KISS banging out Detroit Rock City during a pivotal game of Dungeons & Dragons to the catharsis and psychic liberation of Kate’s Running Up That Hill, to even viewers getting emotional over a villain’s death scene mainly due to the music, it’s hardly a surprise we’re obsessed with the soundtrack.

In a recent interview, Kate revealed that it is ‘very special’ that a new young audience have discovered her song.

Speaking to Emma Barnett on BBC Radio 4’s Woman’s Hour, the music icon said: ‘It’s just extraordinary. I mean it’s such a great series, I thought that the track would get some attention. 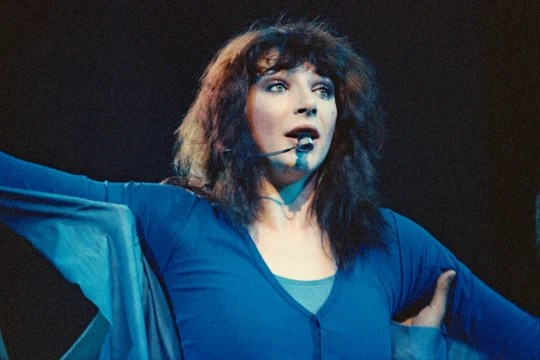 Kate, pictured here in 1979, said she was shocked at just how much the popularity of Running Up That Hill had boomed (Picture: Pete Still/Redferns)

‘But I just never imagined that it would be anything like this. It’s so exciting. But it’s quite shocking really, isn’t it? I mean, the whole world’s gone mad.’

She added: ‘What’s really wonderful, I think, is this is a whole new audience who, in a lot of cases, they’ve never heard of me and I love that.

‘The thought of all these really young people hearing the song for the first time and discovering it is, well, I think it’s very special.’

The digital edition of Stranger Things: Soundtrack from the Netflix Series, Season 4 as well as pre-orders for CD and vinyl editions of the album are available here.

Stranger Things Season 4 Volumes I and II are available to watch on Netflix.