Stranger Things fans are confident that Max Mayfield will make a full recovery in season 5 after spotting what they believe is a huge clue in the season 4 finale.

The gripping last episode saw Sadie Sink’s Max lose her sight and become comatose after coming face to face with the evil monster Vecna, on top of another gut-wrenching death.

While it’s not yet been confirmed whether the fan favourite will be returning to the Stranger Things universe for the fifth and final chapter, viewers have been sharing theories that she’ll make a full recovery – and it’s all to do with Stephen King and Peter Straub’s The Talisman.

Eagle-eyed viewers spotted that Lucas was reading the scary sci-fi novel to his ex-girlfriend while she lay in the hospital, and they believe it will play a significant part in the next series.

For those unfamiliar, The Talisman follows Jack, a 12-year-old who sets out on an adventure in a bid to save his mother Lily, who is dying from cancer, by finding a crystal called the Talisman.

Max was left in a coma at the end of Stranger Things season 4 (Picture: Netflix)

Jack’s journey takes him simultaneously through the American heartland and ‘the Territories’, a strange fantasy land that is set in a universe parallel to that of Jack’s United States, similar to the Upside Down.

People in the Territories have ‘twinners’, or parallel individuals, in our world. Twinners’ births, deaths, and other major life events are usually paralleled. Twinners can also ‘flip’ or migrate to the other world but only share the body of their alternate universe’s analogue.

In rare instances, a person may die in one world but not the other, making the survivor single-natured, with the ability to switch back and forth, body and mind, between the two worlds. 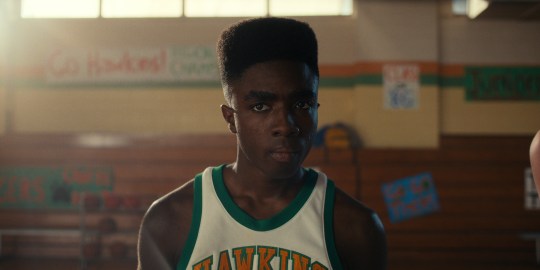 Lucas was reading extracts of The Talisman to Max as she lay in hospital (Picture: Netflix)

Stranger Things fans have a hunch that the Duffer brothers were giving a sneak preview of what is to come in the next chapter, and how the gang will try and save Max.

Taking to Reddit, one user said: ‘The main character’s mother has cancer I believe, so he goes into The Territories to find what he needs to help her. He eventually finds it and is able to return and cure her, so I would definitely say it’s promising for Max’s recovery.’

Love that heâs reading the Talisman by @StephenKing to Max at the end of #StrangerThings one of my favorite stories that I hope is some foreshadowing for Season 5.

Itâs been like 20 years since I read it, but I can think of a few connectionsâ¦ (might have to dig out that old copy)

And the theories didn’t stop there, with someone else pointing out the potential storyline.

‘Jack goes on a quest into the Territories to seek the magical quest item – the Talisman – to save his mother’s life,’ they wrote.

‘His quest into the other world brings back the object that saves her life. Could they be setting up an arc for one of the Hawkins Gang to go into the Upside Down to get something to bring Max back? I think this could be a fun way to foreshadow S5, especially given that Lucas is literally holding the book (The Talisman itself) as he reads to Max.’

Another said: ‘I think it’s DEFINITELY intentional, given that the plot of the Talisman is about a teen boy who goes into an alternate world to find a magical item that saves the life of his dying mother.’

Of course, it’s also worth mentioning that the Duffer brothers are actually bringing The Talisman to screens with a series adaptation heading to Netflix.

So, it’s also possible that The Talisman’s honourable mention in Stranger Things could have just been a nod to their upcoming project.

But you never know…

Stranger Things is available to stream on Netflix.