Imagine, if you will, that the Paradox offices in Stockholm are a giant space cruiser. After light-years of peaceful travel, the crew are suddenly startled by the warning signs of imminent attack flashing on every monitor. There’s no time for goodbyes, so what’s the one item grand strategy Stellaris’ new game director Stephen Muray grabs before he rushes to the cramped escape pods? “I have to save the Mercedes Romero Body Pillow. A real hoopy frood would have grabbed a towel, but I’ll have the comfiest escape pod of them all.”

An industry vet with 20 years under his belt, mostly in the MMORPG space, Muray joined the Stellaris team in 2019 as a designer on the Ancient Relics story expansion, carving out the rock aliens of the Lithoids Species Pack before moving to his new role as game director this past March. “I share a great deal of (former game director) Daniel (Moregård)’s views on what Stellaris needs and where I should be guiding it. He left me Stellaris in a great state – the Custodian Initiative has been a tremendous success.”

The ‘Custodian Initiative’, announced last June, saw a hiring effort and a restructure of the Stellaris developers into two teams. One would continue to work on new content, while the other tackled hotfixes and free updates. Like a self-replicating tide of killer robots, the game has grown exponentially over time, and the Custodian Initiative ultimately means two things: players spend less time stranded between quality of life updates, and Paradox doesn’t need to interrupt the development flow of larger expansions. The team naturally don’t want this growth to alienate a chunk of their player base, so what does the balancing act in deciding what content should be free vs. paid look like?

“Our general rule is that systems should be free whenever possible,” says Muray, “Though the bulk of the content related to them can be gated behind the expansion.” He gives the example of Ancient Relics, a paid DLC packed with multi-tiered stories and gameplay consequences, released alongside a new archaeology system free to everyone. “This gives us freedom going forward to revisit things, like how we later added a site in the Hauer system.” It’s a bit tricky to find the balance sometimes, says Muray, and Paradox tends to prefer making more content free than not – “which sometimes affects the overall value proposition of the DLCs.”

“Despite being at it on Stellaris for six years, we’re still working out some of the nuances.” Murray gives the creation of Hive-Mind empires as an example “Most recently with Overlord, we ended up wanting to make one of the Origins for Hive-Mind empires, which require Utopia to play. We had a bit of a debate on how to handle this before deciding that it would require both Utopia and Overlord.”

Ultimately, Muray says he wants the team to be able to work on “whatever cool ideas they come up with”. His job is to find a place to put them, whether that’s part of a free update or paid expansion. Either way, this new, quicker cadence of development just means more opportunities for the team to get creative. As for ways Muray’s approach differs from previous directors? “I might embrace narrative and roleplaying more than some of my predecessors. There’s nothing better than a wonderful emergent story.” 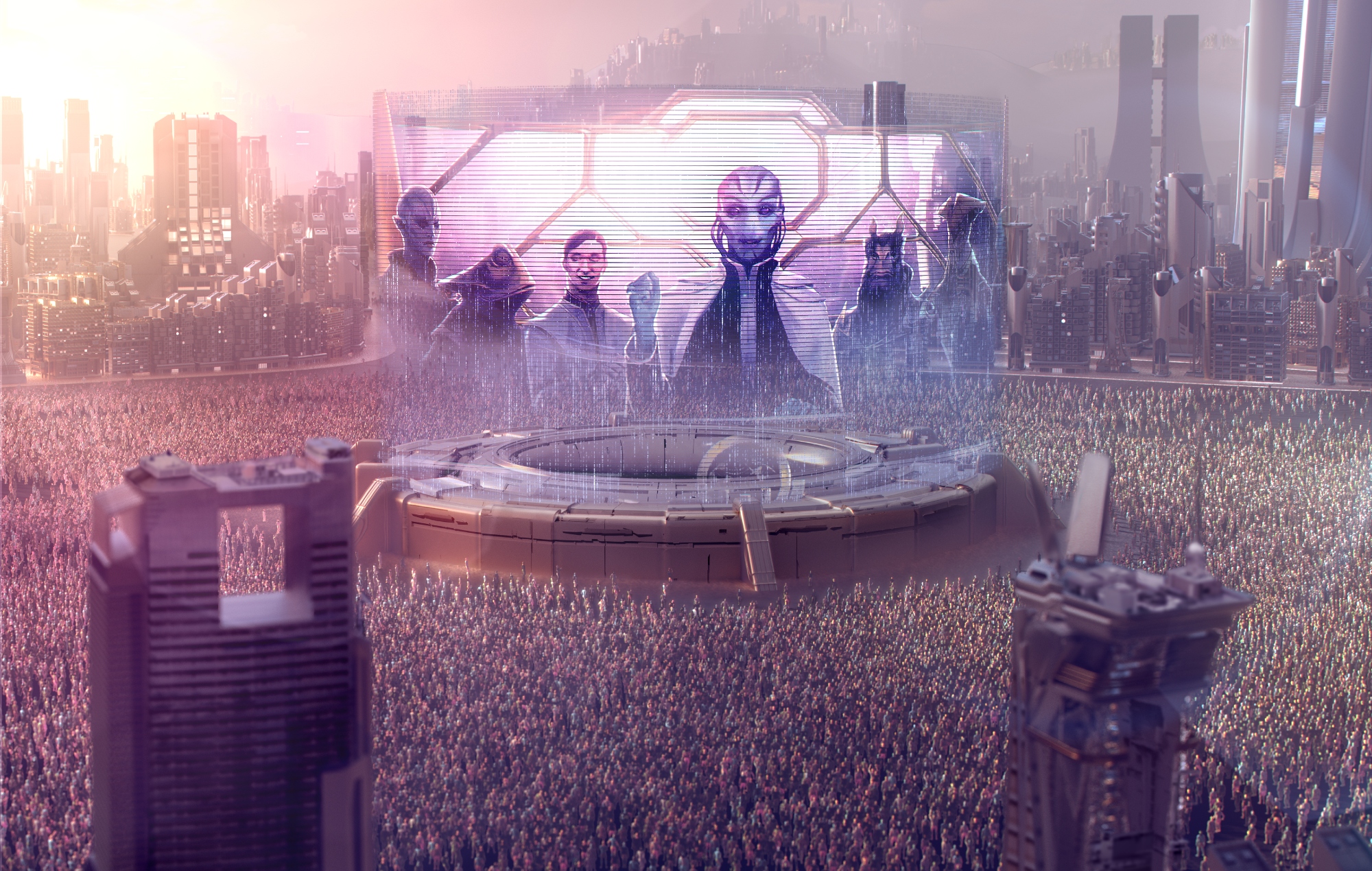 Emergent stories, of course, are where much of Stellaris’ magic stems. Whether roleplaying as ravenous psychic space bugs or the federation from Star Trek, the game can go from Le Guin to Adams to Lovecraft in a single play session. By not writing off a specific tone as too dark, weird, or even silly, players are free to fill the vastness of space with their own personal narratives.

“Virtually every sci-fi trope that exists is fair game, which gives us an absolutely incredible degree of freedom,” says Muray, “back at our fourth anniversary, Moregård described Stellaris as ‘an exploration-focused space-fantasy strategy game that explores dystopian and utopian themes in a playful and light-hearted manner.’ Though we dabble in the absurd from time to time, it can break immersion so we try to keep those moments relatively rare.” Since Nemesis, the expansion that allowed the player to become a tyrannical galactic threat, Muray says they’ve tilted a bit more towards the dystopian side. “I’d like to go a bit in the other direction and lean towards stories that emphasize the utopian sense of wonder, though still leaving room for a bit of existential horror or depravity, of course.”

As for taking inspiration from outside the game, Muray says that it’s all about the classics. “The recent surge in popularity of sci-fi in the media has filled us with a lot of energy. Dune returning to prominence again right as we were working on something subject related was very nice, and there are regular debates and discussions about The Expanse, Babylon Five, 40K, the various incarnations of Star Trek. Currently I’m rereading (Ian M. Banks’) Culture books, but that doesn’t necessarily correspond with planned features or changes in Stellaris.” (Tinfoil tidbit: the Culture books deal with a futuristic anarcho-communist society, which may or may not play into the utopian themes Muray mentioned earlier.) 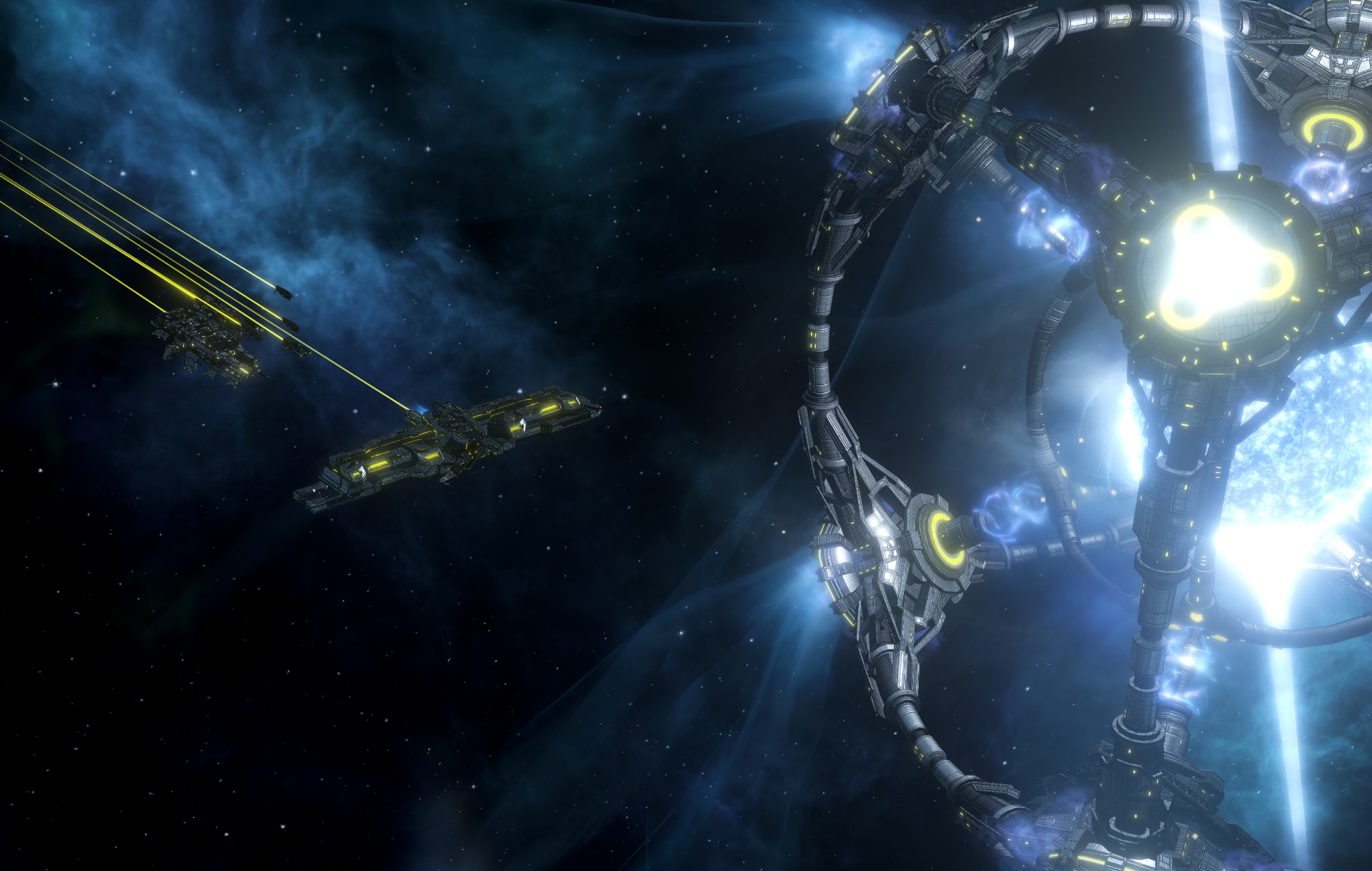 Whatever themes or stories make their way into Stellaris still have to gel with the mechanical needs of the game, of course. The most recent expansion, Overlord, deals thematically with both majesty and projection of power, but not without structurally changing how players interact with the galaxy. “A struggle you have as an expansive empire is being able to respond to threats in a timely manner,” says Muray, “stability requires the ability to protect what is yours, and to reassure your subjects that they’ve made the correct choice by being loyal to you. If you can’t protect and project confidence, then all of these stars were yours only on paper, not in reality.”

Two of the megastructures added in Overlord are intended to help with that problem. “Hyper Relays are a fairly early game technology which greatly diminish travel time across the network, and the Quantum Catapult is a late game megastructure that can toss your fleets virtually anywhere in the galaxy, with a bit of scatter.” As an Overlord, says Muray, this means you can quickly react to faraway threats. “Getting back home, that might take a while.”

When the team creates a new expansion like Overlord, what comes first: the theme, or the immediate mechanical needs of the game? Muray says it’s all of the above. “We’ve had “subject contracts” on the Design “want to do” list since back in Federations, but realized it was a pretty massive task that wouldn’t fit unless it was the core of an expansion by itself. We explored “positive diplomacy” in several areas in Federations, then “negative diplomacy” through espionage in Nemesis, and felt that now would be a good time to look at how diplomacy could work between parties with explicitly unequal power.” 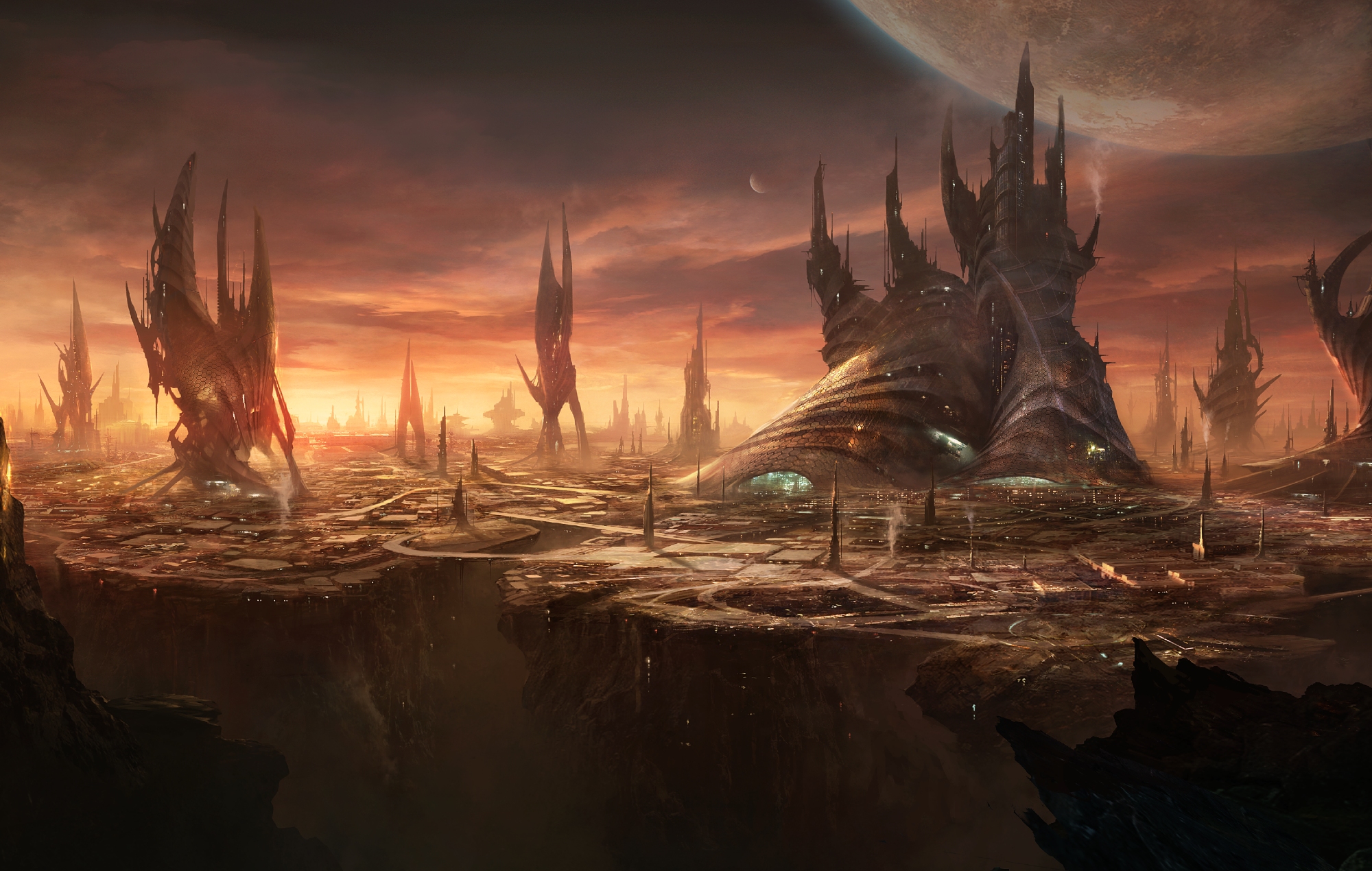 I’m curious how that ‘to do’ list evolves over the course of a six year project like Stellaris. What unexpected directions has the game gone in since that original grand vision – and what happy accidents have emerged as result? “One of our greatest strengths is that we’re not afraid to change and improve, or challenge previous decisions,” says Muray. “The earliest days with tiles and FTL modes are still recognizable as a distant ancestor of the current game, but there have been so many things that have changed.”

As for happy accidents, “I decided to mess around with the Lithoids – up until then, Species Packs were purely cosmetic, but we were adding a little mechanical meat (of sorts) to our rock people. We internally acknowledged ‘yeah, we’ll probably have to add mechanics to all future Species Packs going forward, but we would never go back and revisit Humanoids and Plantoids.’ Well the 3.1 Lem update certainly proved that wrong.” Conversely, some ideas have been on the ‘to do list’ for a long time. “Subject Contracts have been on the “we should do this” list since Federations. The Quantum Catapult idea was even older than that.”

Even while Stellaris offers glittering, strange, and sometimes terrifying visions of the future that awaits us beyond the stars, the team looks toward the six year project’s own future. Murray isn’t making any promises, but it doesn’t sound like he and the team are anywhere close to running out of ideas. “I’d be interested in doing more with our pre-FTL civilizations, like subjugation was pre-Overlord, it feels like an area that’s underutilized and could have so much more built around it. Factions and leaders are another area ripe for improvement. Mechanically, with the Custodian Initiative. I’d like to revisit fleet combat for a balance pass to find ways to reward more diverse fleet compositions, as well as take a pass on Espionage and perhaps Trade and Crime.” 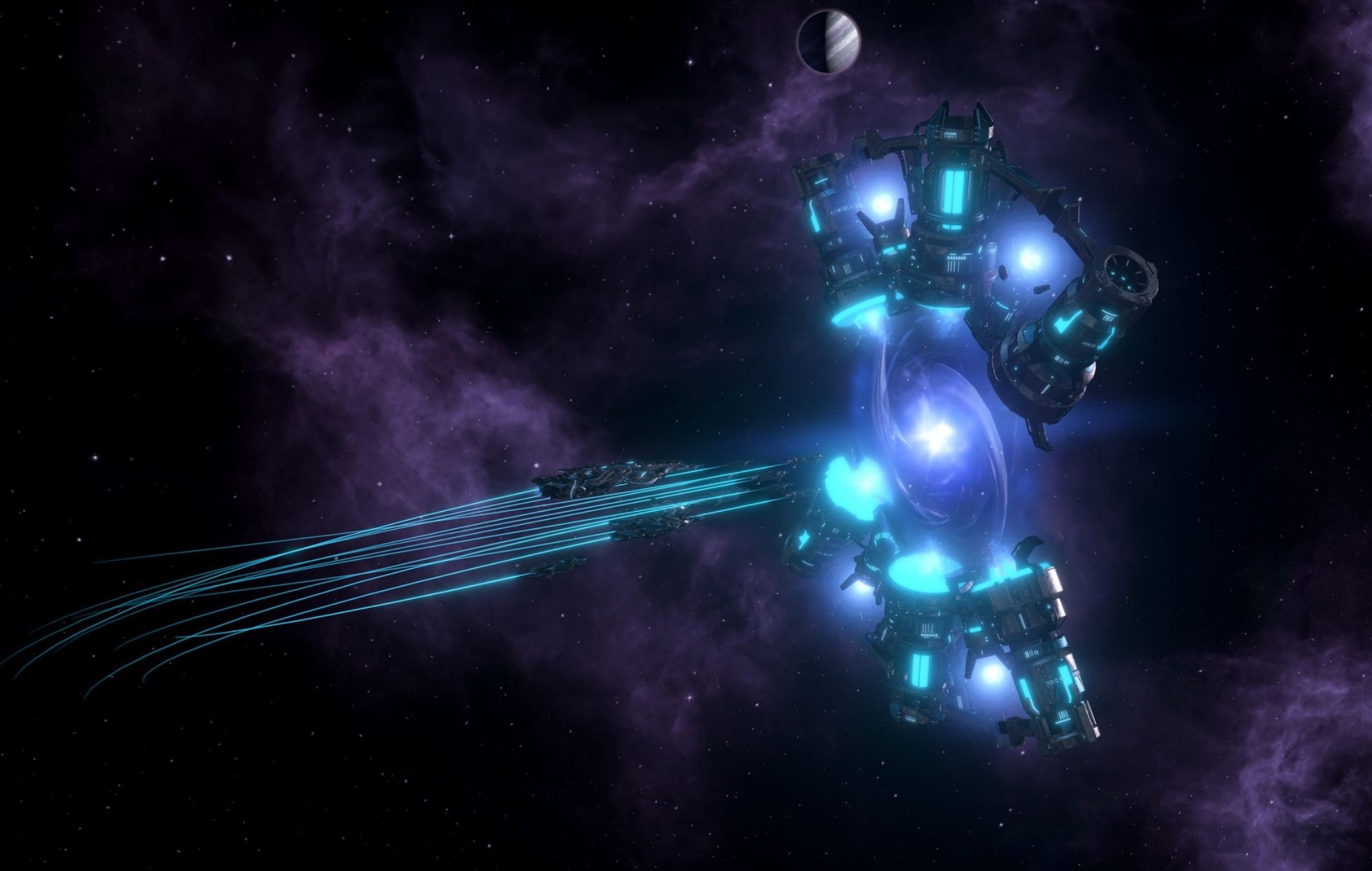 Muray says players are keen to see more done with their empires’ internal politics, too. “I can’t blame them. There’s so much more we could be doing with it than we do now, but it’ll take time. Just like how external politics was broken out over three expansions, to do it justice it’ll take more than one to flesh out the empires themselves. We’ll also want a way to keep it from being ‘oh, another system that gestalts don’t get to play with’, so that nearly triples the optimal quantity of content.”

He’d also like to explore more ways to make uniting – or conquering – the galaxy with friends easier “The Imperial Fiefdom origin in Overlord is pretty cool because multiple human players that select it will all begin as subjects under the same Indolent Overlord, and we’ve spent a bunch of time improving automation and experimenting with tutorial systems, but I think there’s still a whole lot more we can do to make the game more accessible.”

Any chance of more character-focused stories like Paradox’ other grand strategy behemoth, Crusader Kings 3? “People frequently ask why Envoys die and get replaced, when really they’re primarily a resource limiting how many things your diplomatic bureaucracy can handle at a time. It’s mostly for flavour, and so you get a name when the Hive Mind next door eats them after being delivered a strongly worded letter. Mmm. Flavor.” But leaders, says Muray, have never been a major focus for Stellaris. “We don’t want to get as deep as Crusader Kings with complex interpersonal connections and the like, but it might be interesting to see if we’d actually be better off with fewer, but more interesting leaders? I’m not sure if it’s right for the game, but it’s the type of thing that would provide incredibly entertaining design discussions.”

How has it been, seeing such a huge project over such a comparatively huge span of time?

“Like a giant space cruiser that’s under fire. We’re all doomed,” says Muray, reading ahead to the question I opened with, then changes his mind. “We’ve been on a journey of exploration, finding and defining ourselves in a galaxy full of wonder. I’m very proud of how far we’ve come from those first steps into the stars.”

Stellaris is available on PC, Xbox, and PlayStation consoles – you can read NME‘s review of Overlord here.