Stephen believes he was ‘mindful’ about how people could react to new The Outlaws (Picture: BBC)

Actor Stephen Merchant insists he’s not worried about cancel culture in the slightest as he believes he’s always been ‘true of everything’ he’s done.

The 46-year-old director stars and directs in the upcoming crime-thriller series The Outlaws, which sees seven strangers form an unlikely friendship while carrying out a community service sentence.

The show will present a diverse range of characters from different walks of life, and while Stephen was ‘mindful’ of how the show might be perceived, the thought of getting cancelled didn’t bother the star one bit.

Stephen said: ‘In terms of being worried about cancel culture, I feel like I can’t. I can’t start worrying about it, I just don’t know what might ultimately cause offence in that way. I’m not equipped to fully second guess everybody.’

He added: ‘I’m quite conscious and I try to work with all the actors and with all of the writing staff and discuss all these things and ideas. We made adjustments to things here and there, it was a real team effort in terms of trying to engage all that stuff.’

The award-winning actor isn’t the first to rebuke the phenomenon. Ricky Gervais, who wrote The Office alongside Stephen, called out celebrity cancel culture and said broadcasters are too scared to take risks in case they offend the so-called ‘outrage mobs’. 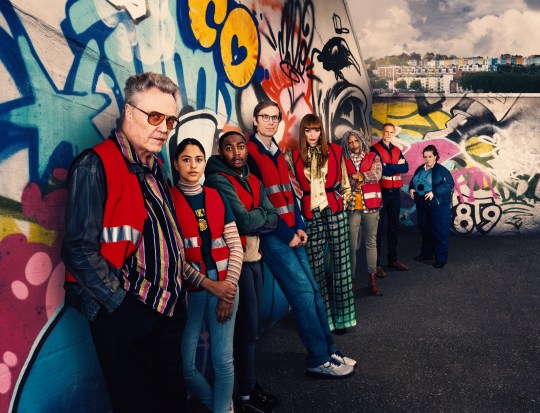 The Outlaws will be premiering on BBC near the end of October (Picture: Big Talk)

Comedian Jimmy Carr has also shared his views and recently admitted the thought of getting cancelled doesn’t faze him one bit.

‘The joke that cancels me is out there already. It is on YouTube somewhere and it is perfectly acceptable until one day it isn’t,’ Jimmy said.

He added: ’There is not a damn thing I can do about it. Let the cards fall where they may.’

The Outlaws, which was filmed in Bristol, follows a group of lawbreakers forced to work together and help redecorate an abandoned community centre.

However, when one member of the pack gets involved in some shady and pretty dangerous business, it’s up to the rest of the crew to unite and protect themselves from trouble.

The series will be available to watch on BBC for UK audiences, however international viewers will be able to catch it on Amazon Prime.

The Outlaws will be available to watch on 25 October on BBC One.